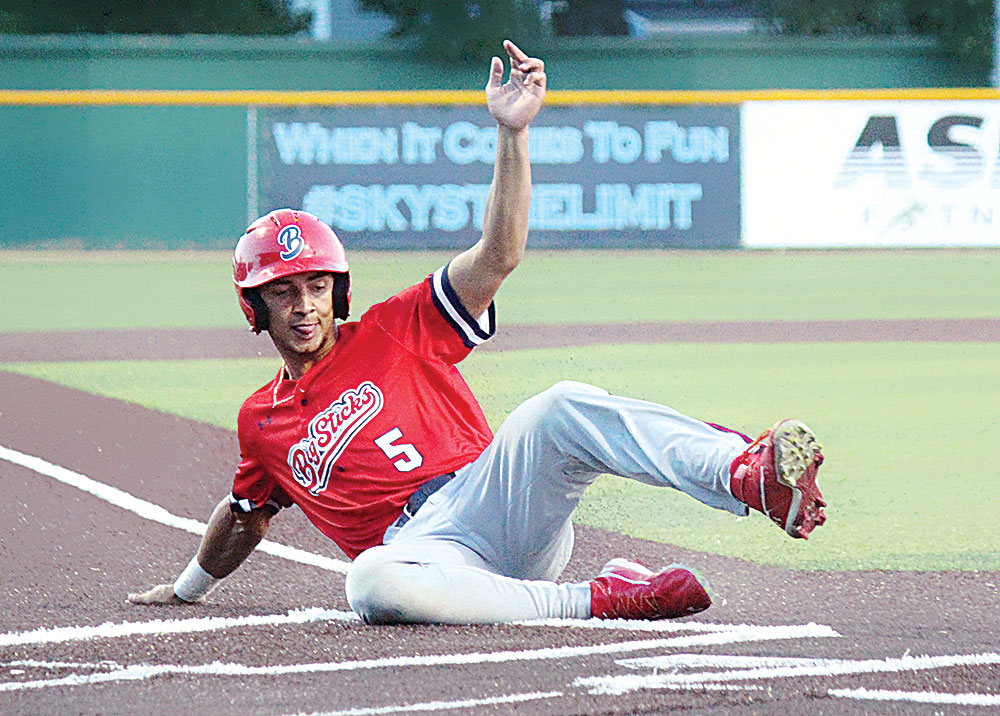 Hanging tough, but not enough firepower to keep up.

The Souris Valley Sabre Dogs (5-7) suffered their third straight loss, falling to the Lewis Division leading Badland Big Sticks (9-3) Thursday evening by a score of 8-6 at Corbett Field in Minot.

The Big Sticks threatened to blow the game open early by loading the bases in the top of the first inning. However, the Sabre Dogs escaped only allowing a bases loaded walk to Brayden Olson, 1-0.

Crews Taylor nearly got the Sabre Dogs level in the bottom half, but a high-flying snag by shortstop Bryson Ford resulted in a 5-4 flyout double play to hastily end the inning.

Souris Valley broke through two innings later when they loaded the bases against Big Sticks starting pitcher Brock Rountree. Taylor, getting a second chance with runners in scoring position, drew his own bases loaded walk to even the score at one a piece.

On a short leash with wandering command, Rountree was promptly replaced on the mound by Joseph Harris with still two outs left to get in the third inning and all the bases occupied.

Chauncey Callier ripped an RBI single through the left side to seize the lead, 2-1, but Drew Pollum was thrown out at home trying to score a second run on the play. Austin Rayno flew out with the bases loaded to end the inning.

Sabre Dogs starting pitcher Zavian Caldwell couldn’t preserve the one-run lead, giving up an RBI single to Ben Thoma in the top of the fourth inning. But, Souris Valley speedster Phillip Childs got the small cushion back for the home team in the bottom half with an infield RBI single on a chopper in front of the plate, 3-2.

That slim lead was also erased. In the following half inning, Mason Schwellenbach coaxed a line drive solo home run over the right field fence.

Continuing to trade runs, Callier put the Sabre Dogs back on top with an RBI double in the bottom of the fifth. But, once again the Big Sticks had an answer and lived up to their team name.

No. 9 hitter Nathan Sanders uncorked a three-run home run off pitcher Matt Sartwell to give the Big Sticks a 6-4 lead in the sixth.

A sacrifice fly and passed ball in the eighth inning pushed the Big Sticks ahead 8-4. The Sabre Dogs left the bases loaded in the bottom half after Pollum came through with an RBI single.

The Sabre Dogs had one more rally left in them. Following a Wilson Roubion RBI single with two outs in the ninth, the Sabre Dogs loaded the bases once again.

This excitement, however, was short-lived as Pollum grounded out to the pitcher to end the game.

The Sabre Dogs continue their seven-game home stand at Corbett Field with a three-game series against Expedition League newcomers Fremont Moo this weekend.

First pitch is set for 7:05 p.m. this evening and again on Saturday. Sunday’s contest will get underway at 5:35 p.m.