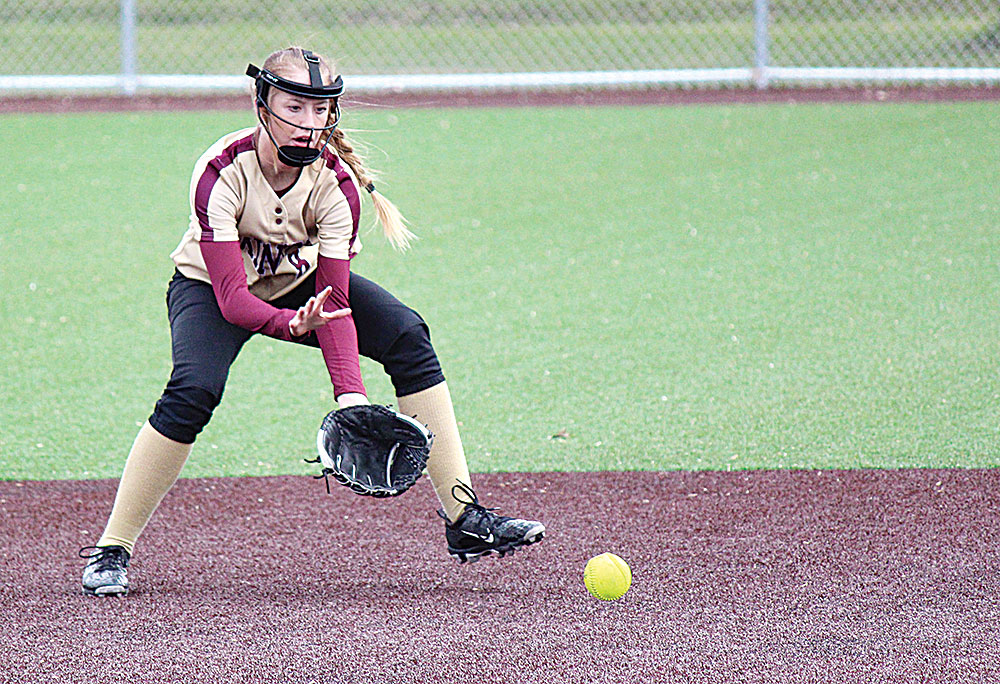 Alex Eisen/MDN Minot High sophomore Taylee Hertz fields a ground ball in the infield Tuesday evening in the first game of a doubleheader against Century at the South Hill Softball Complex.

Taking advantage of some Majettes’ miscues and racking up a bunch of runs with relative ease, the Patriots proved Tuesday evening why they are leading the West Region standings.

Bismarck Century (20-4, 14-2 WDA) swept the Minot High School softball team (11-8, 7-6 WDA) by scores of 7-1 and 10-4 in a doubleheader where the Majettes struggled to play their own game on their home turf at the South Hill Softball Complex.

“We need to figure out how to be us again,” MHS head coach Gerard Cederstrom said. “We were off today and Century was clicking. I hate to say that, but that’s what happened.”

Century sophomore pitcher Madison Zander carved the Majettes up in the first game. Zander threw a complete game, allowing one run on four hits. She also picked up six strikeouts.

MHS starting pitcher Paige Ackerman wasn’t as fortunate in the circle. The Patriots jumped on Ackerman early with three runs in the first inning.

Malee Wittenberg had an RBI single, Kelsey Mischel was hit by a pitch with the bases loaded and Lexi Duchsherer drew a bases loaded walk.

Minot’s lone run of the contest came in the fourth inning via Landry Maragos, who sprinted around all the bases after two Century fielding errors allowed a sharply hit ground ball to roll all the way out to the fence in left field.

RBI hits by Duchsherer and Brooklyn Morris padded the Patriots’ lead to 5-1 in the fifth. And, for good measure, Century added one more run in the sixth and seventh innings.

“I don’t think (Century) is way better than us, by any means,” Cederstrom said. “We just played them on Friday (May 3) and split with them.”

Game 2 saw the Majettes take the lead for the first time in the bottom of the second inning. Sophomore Taylee Hertz ran out an infield RBI single and Ackerman walked with the bases loaded, 2-1.

In the top of the third, Morris got a ball through the left side of the infield to bring in two runs off MHS starting pitcher Hailey Espe.

Century scored three more runs in the fourth, including a solo home run by Zander, and pushed across four runs in the fifth against freshman pitcher Avery Falcon to take a 10-2 lead.

With the game out of reach, MHS junior Cambrie Pretzer picked up a two-run double in the seventh to make the final score a little more palatable at 10-4.

Minot’s Jaycie Rostad went 3-for-4 in the nightcap.

“There have been games when we have been us,” Cederstrom said. “Where we have put the ball in play, ran hard and made all the plays defensively. (Today) we just weren’t there. We had no fire today. This team needs fire to play well.”

The Majettes make the trek to Fargo this weekend for road games against West Fargo on Friday at 4:30 p.m. and West Fargo Sheyenne on Saturday at 11 a.m.

Minot has one more home regular season doubleheader, a nonconference affair on May 16, against Williston at the South Hill Softball Complex.