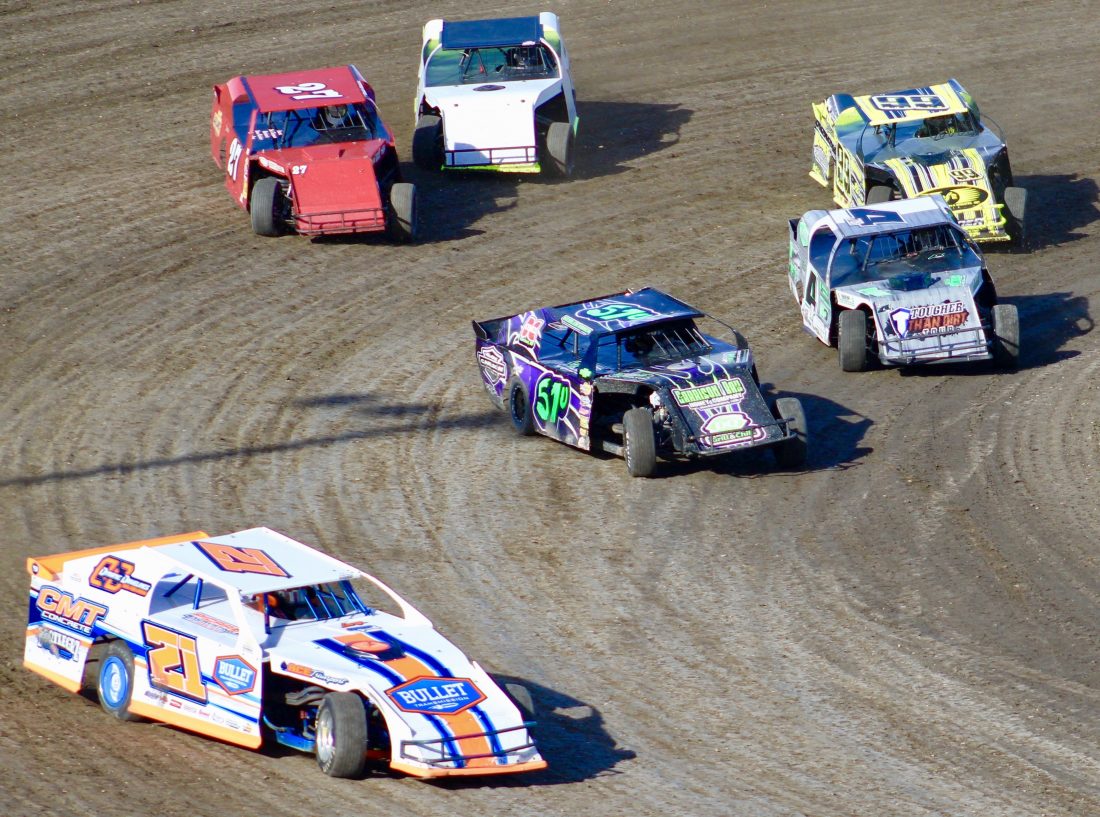 Justin Martinez/MDN Minot native Taylor Stenvold (21) emerges from the pack during Heat 2 of the IMCA Sport Mods class on Sunday at Nodak Speedway.

All Brandon Honrud and company wanted to do was race in peace.

The Bismarck native couldn’t catch a break on Sunday during his IMCA Hobby feature race at Nodak Speedway’s Magic City Dirt Series. Honrud began the high-speed showcase in the front of the pack and immediately left his competitors in the rearview mirror by building his lead with precise turns on the outer lane of the track.

Honrud appeared to be well on his way to a blowout victory at the midway point of the event as he began to lap his fellow racers. Then, the yellow flag came out.

One of the racers got spun around in the heat of the battle, forcing the remaining competitors to slow down until he could get off the track. Just like that, the cars bunched up, and Honrud’s commanding lead was wiped away.

This was only the beginning, though, as a total of four caution flags came up during the race. Each time Honrud held the top spot and each time he watched as another yellow flag emerged, erasing whatever momentum and separation he had built.

Finally, 15 minutes into the race with five laps left, the proverbial thunderclouds looming over Honrud’s blue-and-orange No. 00 car cleared up. No more cautions emerged, and the speedster separated himself from the pack once more en route to the wire-to-wire victory.

“It was tough,” Honrud said. “It’s hard to get in a rhythm that way, but the win will help me a lot (moving forward).”

Honrud was one of the lucky ones, as even more flags littered the air throughout the day at Nodak Speedway.

Things hit an even bigger snag in the following IMCA Sport Mods feature race, as all the stoppages caused the 20-lap event to hit its 25-minute time limit with just a few laps to go. The race stopped there, and Williston’s Brady Bjella was named the winner for leading at the time of conclusion.

Those in the IMCA Stock Car feature race appeared to be in for the same fate as three caution flags came up in the first four laps of the 20-lap event.

To make matters worse, a red flag came out with 14 laps left. A small fire broke out in the pits, causing the race to come to a complete standstill for a few minutes before being given the green flag.

But the stoppages ended there, as the racers were able to finish the event undisturbed. After starting in the eight spot, Dalton Flory gradually worked his way to the front with just a few laps to go.

The Williston native never looked back and cruised to a comfortable first-place finish.

“(Having no cautions) really helps you get into a rhythm and keep your rhythm,” Flory said. “Those long green-flag runs just help a lot to mentally keep your cool and run your race.”

Yet another Williston native finished on top in the following IMCA A Mods feature race, as Travis Hagen took first place over Ray’s Jason Wolla to end the day.

Next on the schedule is the Tougher Than Dirt Tour, which begins next Sunday at 6 p.m. at Nodak Speedway.