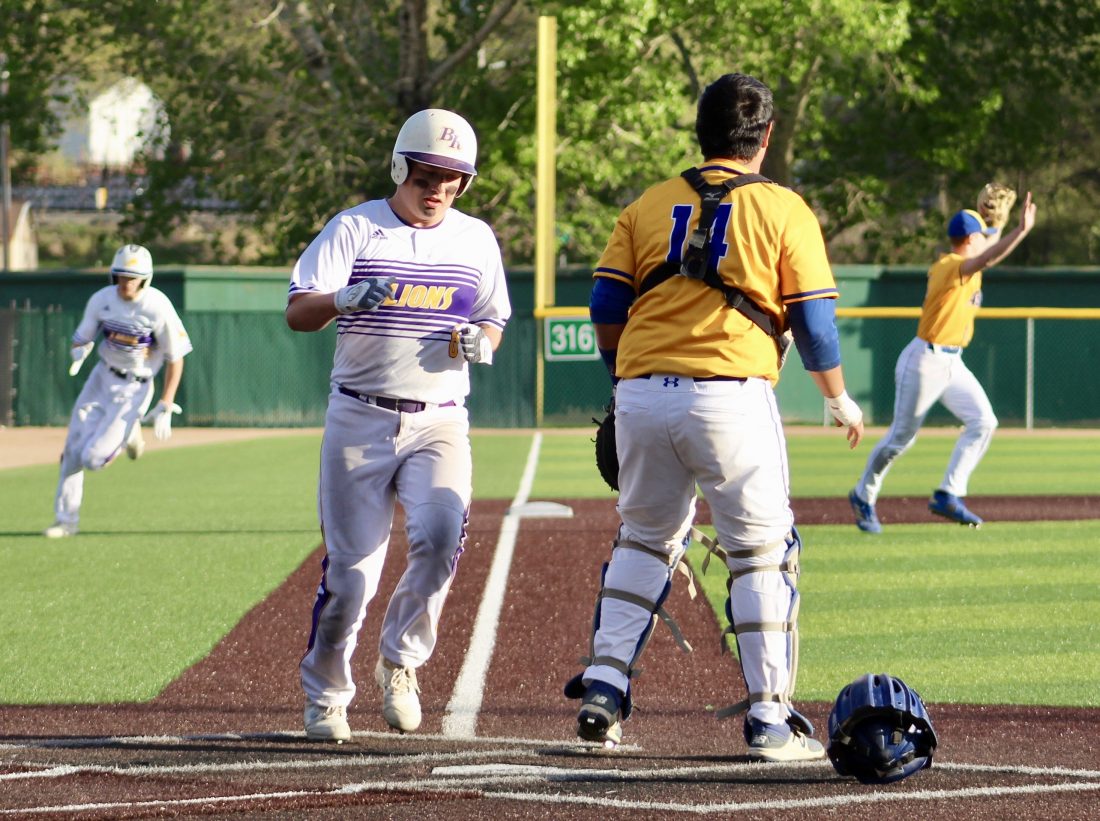 Justin Martinez/MDN Bishop Ryan junior Kersey Harris comes home during the Lions’ 6-1 win over Velva/Drake-Anamoose on Monday in the semifinals of the Region 6 baseball tournament at Corbett Field.

It actually was more than enough.

The No. 2-seeded Bishop Ryan baseball team entered Monday’s Region 6 semifinal game with high intensity and even higher expectations, as it attempted to deliver an early knockout against No. 1-seeded Velva/Drake-Anamoose at Corbett Field.

Ryan erupted for five runs in the first inning, and yet each score prompted the same response from the team’s dugout.

But the scoring spree actually proved to be all the offense Ryan needed, as the Lions played some stout defense the rest of the way and earned a convincing 6-1 win over the Aggies to advance to today’s state-qualifying title game.

“I thought we played well,” Ryan head coach Ben Magnuson said. “We got good at-bats together all day…This was probably our best (defensive performance) this season, too. I thought everybody was really locked in.”

With a runner on first in the top of the opening inning, the senior connected on a pitch from Velva’s Luke Zimmer and sent it right up the heart of the Aggies’ defense. By the time Velva’s outfield could retrieve the ball, Hedberg was already rounding second base.

The senior halted at third for the RBI triple to give Ryan a quick 1-0 lead. Hedberg wasn’t there for long, though, as junior Kersey Harris brought him home on the next at-bat with a blooper to third that eluded Velva’s infield for an RBI single.

Sophomore Nicholas Sanders then pushed the lead to 3-0 with an RBI single of his own, and Jaxon Feller provided the exclamation mark.

The sophomore sent a high-flying shot into the infield for what appeared to be an easy out, but the ball bounced off the glove of Velva’s Gunnar Mogen and hit the turf. Two more runs scored and made it a 5-0 contest.

“We were just hitting the ball hard,” Hedberg said. “Once one or two guys got a hit, it was just contagious for the rest of the team…It was almost like we flipped a switch and told ourselves that it was time to go for the region tournament (title).”

Now with a comfortable lead behind them, Calvin Watkins and company went to work on defense.

The Aggies couldn’t crack the code, as the junior pitcher delivered a number of strikeouts to keep them off the scoreboard. Any contact Velva did manage to make also did little good, as the Lions’ infield put on a defensive clinic.

The first stellar play came from Hedberg in the bottom of the fourth inning. With two outs and a runner on second, Velva sophomore Jersey Selzler sent a shot into the infield.

The ball had just enough air under it for Hedberg to make a play, as the second baseman came flying in for the diving catch to end the inning.

Velva sophomore Gage Florence finally got his team on the board in the bottom of the fifth inning with an RBI groundout to make it a 5-1 contest, but that was as close as the Aggies would get the rest of the way.

With a runner on first and no outs in the bottom of the sixth inning, Velva sophomore Enrique Gonzales hit a ground ball to Hedberg. The senior fielded the ball, tossed it to Logan Merck for the forced out at second and watched as his sophomore teammate fired a bullet to first for the double play.

The highlight-reel play prompted a round of applause from the Lions’ dugout, and nothing but smiles were seen on the infield’s faces.

“It’s really fun to make plays defensively,” Hedberg said. “We pride ourselves in our defense, especially in the infield. We have fun out there and crack jokes, but we also get down to business and try to make some plays.”

Now leading 6-1 in the bottom of the seventh inning, Watkins took his team to the finish line.

The junior got the final three outs for the Lions in what was an immaculate complete game, allowing just one hit and one run in seven innings pitched.

“I think it was just all the energy around us,” Watkins said. “(VDA) was the No. 1 seed, so they had the pressure… I was pitching with a lead, and that always helps too. It just makes things better.”

Hedberg finished with one RBI, one run and a triple on 2-for-5 hitting in the win, while Merck recorded two runs on 2-for-4 hitting. Gonzales had the lone hit (1-for-3) for the Aggies with a double in the fourth inning.

With the loss, Velva is set to face No. 3-seeded Surrey today at 3 p.m. in a loser-out game. The Mustangs enter the showdown with some momentum after completing an epic comeback against No. 5-seeded Central McLean to keep their season alive, 11-6.

The Cougars appeared to be in for a blowout win as senior Bo Weisenberger gave his team a quick 2-0 lead with a double in the second inning that brought in two runs. The hit sparked a scoring spree, and Central McLean jumped out to a 6-0 lead through two and a half innings.

But the Mustangs put their foot down, scoring 11 unanswered runs the rest of the way en route to the victory.

The backbreaker came in the bottom of the sixth inning when Surrey sophomore Dalton Anderson stole third base and was gifted a free trip to home plate off a Cougars error to push the lead to 10-6.

The winner of the Aggies and Mustangs will face the red-hot Lions in today’s championship game at 5 p.m. with a trip to the state tournament on the line.

If the Lions lose today against either Surrey or Velva, they would get a second crack at a state berth on Thursday at 5 p.m. given the double-elimination format.