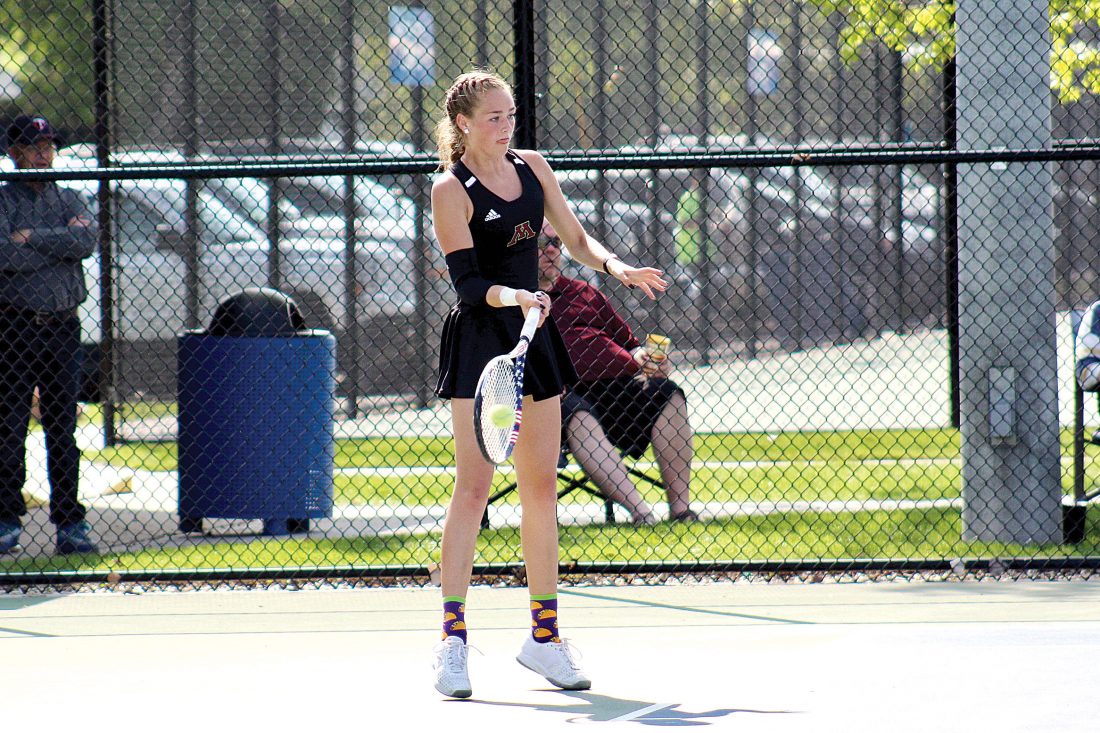 At the beginning of the season, senior Raquel Egge spoke it into existence.

“I’d like to take first at WDA,” Eggs said at practice an afternoon before the season started.

She came into the West Region singles tournament seeded No. 1 and battled her way through each opponent to claim the crown. She defeated Dickinson’s Anna Stankova in the championship match in sets of 6-2 and 6-2 to earn the individual singles title.

“It feels great that all the work I’ve put in has finally paid off and it shows in my game,” Egge said after her win Saturday.

As a senior, Egge has stamped her spot in the Minot history books as the winningest individual for the Majettes tennis program and now holds a WDA singles title. 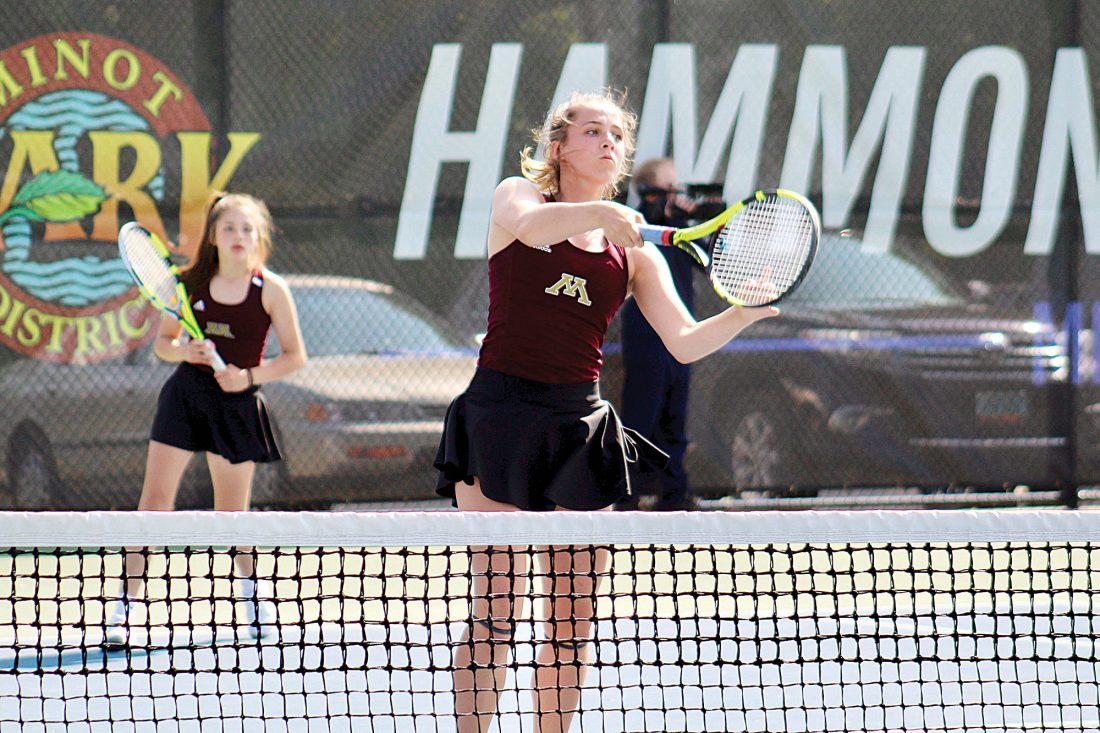 “We had a great day,” said Majettes head coach Scott DeLorme, who was named the WDA Coach of the Year. “Raquel winning the singles title was a great way to go out in this tournament as a senior. She’s put so much time in for the last six or seven years. To all culminate on this day and for her to play some good tennis was really fun to see and she deserved that.”

On the doubles side, the young pairing of freshman Sofia Egge and sophomore Morgan Wheeler stunned the competition as they worked their way up to the championship match. They defeated the No. 2-seeded Legacy pair of Camaryn Beasley and Abby McPherson in the semifinals in sets of 6-3 and 7-5 to earn their spot.

“(They) went from unseeded to the championship where they competed very well against the No. 1-seed from Mandan,” DeLorme said. “They’re a freshman and sophomore so they’re going to do some good things for us in the future.”

Sofia Egge and Wheeler fell to the No. 1-seeded Mandan pair of Elizabeth Felderman and Kenna Vogel in sets of 6-3 and 6-2 to be named runners-up for doubles in the West Region.

Mandan’s Felderman and Vogel took out Minot’s Joelle Fettig and Eden Olson in the semifinals, dropping the Majettes’ pair to the third-place match. They then went on to defeat Legacy’s Beasley and McPherson to take third in doubles.

“We know what we’re capable of and we showed it today,” Fettig said. “I think we work really well together. We both really want it and we go out there and fight for it. We get it done.”

Raquel Egge will represent the Majettes in singles at the state individual tournament as the No. 1-seed from the West. In doubles, the Majettes will be represented by Sofia Egge and Wheeler as the West’s No. 2-seed and Fettig with Olson will be the West’s third seed.

“We had three great performances and we’re very happy with our outcome,” DeLorme said. “We know we’ve had the skill and we’ve had some up and down moments throughout the year, but that’s going to come (when) we’re a pretty inexperienced team.”

This weekend proved to DeLorme that this team has grown together and can play and be competitive when it counts. Though the entire team may not have been present for the past two WDA titles, they made it a goal to continue the trend set before they stepped onto the court.

Now, the Majettes turn their focus to the state tournament, where they will be coming as as the defending state champions. With the way the postseason has gone so far, the team isn’t counting out the possibility of a repeat.

“I’m excited just to go out there and see what we can do,” Fettig said. “See if we can make some upsets and see if we can place high.”

The 2019 State Tennis Tournament will begin Thursday, May 30, in Grand Forks with the team duals. The Majettes are scheduled to open the tournament against the East’s fourth-seeded Grand Forks Red River. The dual is set to begin at 10 a.m. at Choice Health & Fitness courts.

Alex Eisen/MDN Minot High senior Hailey Espe (center) celebrates after the Majettes get a tag out at second base against Jamestown in a state qualifier contest at the West Region Softball Tournament Saturday in Minot. Minot won 7-4 to advance to the state tournament.

Justin Martinez/MDN Minot High School senior Odin Nelson prepares for an attempt in the javelin throw on Saturday in the state track & field meet at the MDU Resources Community Bowl.

Justin Martinez/MDN Rugby’s Emily Mattern, Ellie Duchscherer, Maria Blessum and Anni Stier (From left to right) hold up their plaques after a first-place finish in the 4×400 meter relay on Saturday in the state track & field meet at the MDU Resources Community Bowl.

Justin Martinez/MDN Rugby junior Jaden Hamilton elevates for an attempt at the high jump on Saturday in the state track & field meet at the MDU Resources Community Bowl.