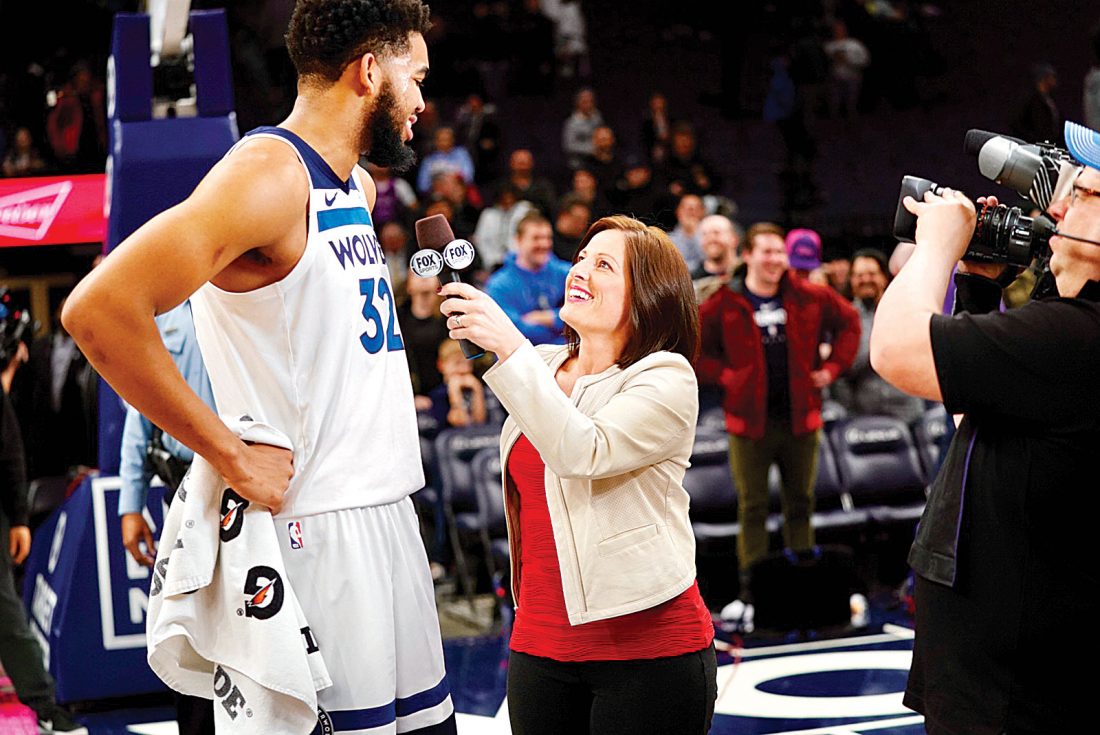 From providing sideline reporting for the Minnesota Timberwolves to being the first woman to do play-by-play for the Minnesota Twins, Marney Gellner wants everyone to know that in addition to being a trailblazer for women in the sports world, she also puts her pants on one leg at a time just like everyone else.

Gellner was born in Langdon and grew up in Minot. She graduated from Bishop Ryan and participated in numerous sports during her time there.

“Sports was a huge part of my life growing up. I feel really fortunate to have gone to Ryan because if you wanted to play a sport, you could play a sport,” Gellner said. “I had some success with some of the sports I played, but it was basically life for me.”

Though sports were everything to Gellner and she considered herself a jock, being a sports broadcaster or journalist was never a goal. It wasn’t even really a thought. 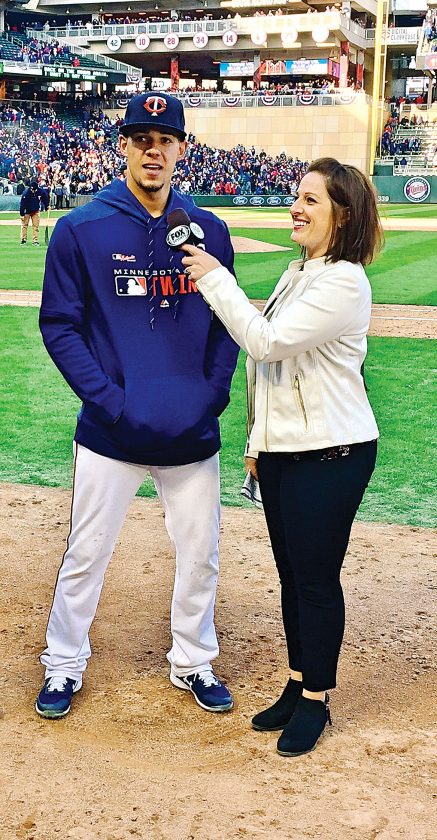 “I thought I would be writing sketches for Saturday Night Live, and I’m not even kidding,” Gellner said with a laugh. “I kind of kept a little sketch book of characters, but I didn’t really get very far with that little notebook I had. But, if I had a dream, that’s what it was.”

With no majors offered in SNL sketch writing, Gellner studied communications at the University of Mary in Bismarck while also being a two-sport student athlete.

“It was great because it wasn’t specific to broadcasting or anything else because I didn’t know what I wanted to do,” Gellner said.

Gellner started as a weekend sports anchor for KXMB-TV in Bismarck and after a year and a half moved on to work at WDAZ-TV in Grand Forks for two years. Then, she moved to Madison, Wisconsin, to work at WISC-TV for three years which provided lots of opportunities in professional and college sports.

“I kept falling into these jobs and throughout all of these jobs I was always thinking ‘What will my career be? When I’m done with this, what am I going to do?'” Gellner said. “It wasn’t until after I got the job at (Fox Sports North) and maybe a good five to ten years into that where I was like ‘Huh, this might actually be my career.'” 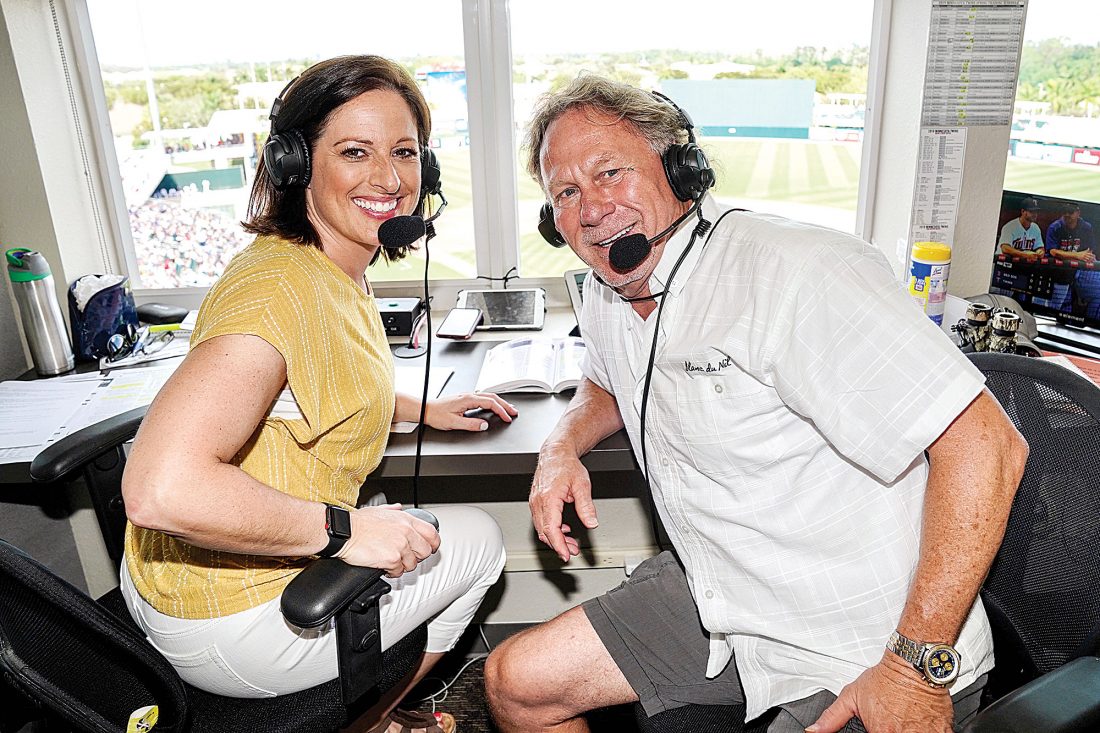 Submitted Photos Marney Gellner poses for a photo inside the broadcast booth with Dan Gladden during her stint doing play-by-play for the Minnesota Twins during Spring Training in March.

Though thoughts of SNL still swim around in Gellner’s mind, she’s happy with the path she’s on.

“I feel like it pursued me more than I pursued it,” Gellner said. “I took the safe route and landed in a pretty good place, so I feel like that was the right route.”

In December of 2018, some pretty somber circumstances hit Minnesota Timberwolves broadcaster Dave Benz, so he took time off to be with family. This gave Gellner the opportunity to call play-by-play for the Timberwolves with Jim Peterson against the Chicago Bulls, becoming only the second woman in NBA history to call a game. This was not her first play-by-play experience, though, as she had been the voice of the Minnesota Lynx telecasts for the past eight seasons.

“It was a planned, one-game spot for me…but it was not a celebratory opportunity,” Gellner said. “I realized how rare it was to have a woman do play-by-play in the NBA… For me, personally and professionally, it was really significant. But I was also doing it because a coworker, who is also a good friend of mine, had his mother pass away.”

But before her time calling play-by-play for the Timberwolves, Gellner was approached in November by her boss at FSN. He presented her with an opportunity she couldn’t refuse.

“He told me that the Twins have an opportunity for someone to do a few games at spring training and they thought I would be perfect,” Gellner recalled. “It was so far from my radar, it just came out of the blue. I was thrilled.”

After about a dozen astonished yeses from Gellner, she rearranged her schedule and took off a few games as sideline reporter for the Timberwolves so that she could accompany Dan Gladden in the booth for three Minnesota Twins spring training games.

“The seventh, eighth and ninth innings when all of the minor league guys come in and they have no names on their back and you get an entire separate sheet with guys that may or may not come up to bat and everyone is kind of scrambling trying to figure out who’s at the plate at the same time while I’m also trying to manage the rest of the broadcast is challenging,” Gellner admitted.

With three games to tackle, Gellner was going to take the opportunity with all it had to offer. She had no idea if the chance would ever come her way again, so she knew she needed to get a home run call in. Absolutely had to.

“I thought, ‘I would love to kind of put my stamp on this,'” Gellner said. “I did not want it to be in an arrogant way or a nauseating way. I didn’t want it to be about me, but I wanted to put a stamp on it if the opportunity came.”

The idea was set. After getting some feedback on Twitter and some friends, she decided making a call would be worth it. With her call in mind, Gellner would practice saying it to herself in the coming months so that, if the opportunity arose, it would roll naturally off the tongue. She told Gladden and radio producer Kyle Hammer about the plan.

As fate would have it, Twins home runs were hit during Gladden’s innings in the first two games she called. Coming into the third game, Gellner and Gladden talked about her stamp on the event.

“He said ‘If there’s a home run hit in the fourth, fifth or sixth inning today, I’m gonna just stop. You jump in, take over the call, get your call in,'” Gellner recalled. “He wanted me to leave there with the chance to call a home run.”

Then, in the first inning of the third game, C.J. Cron fired a ball to right field.

“I used my call, ‘Better call mama,’ and I was about to come out of my shoes (because) I was so excited,” Gellner said. “Professionally, it was one of my most memorable moments.”

After 16 years with Fox Sports North, Gellner has made history twice and become one of the most recognizable sports personalities in the upper Midwest. But, if SNL came knocking on her door, Gellner wouldn’t hesitate.