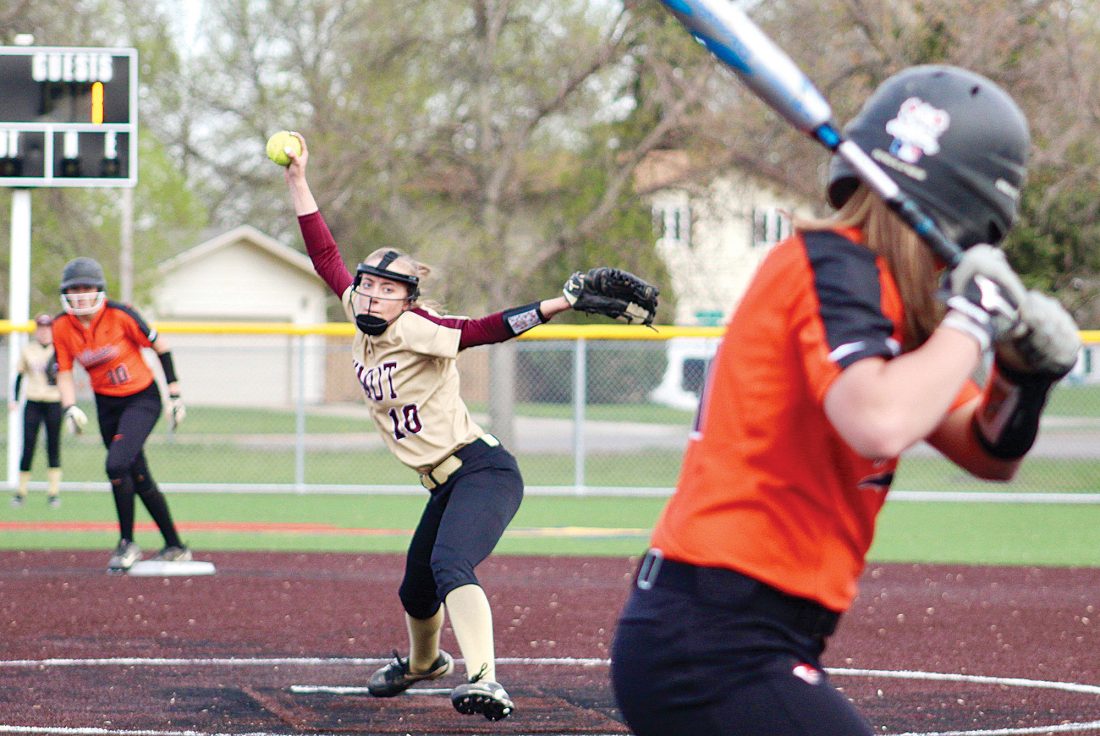 With their time competing in front of a home crowd ticking away, the Majettes’ seniors were more than happy to play a couple extra innings.

That doubleheader actually turned into two and a half games, though, as the Majettes kicked off the outing by wrapping up a game against the Coyotes that was postponed in the fifth inning on April 30 and rescheduled to Thursday.

“Today was Senior Day, and they definitely took advantage of it and stepped up,” MHS head coach Gerard Cederstrom said. “I’m proud of these seniors…It was nice to see.”

Minot immediately began the day in a high-pressure situation, as it picked up April’s postponed game with the score tied at 11 in the top of the fifth inning.

Now leading 15-14 entering the top of the sixth inning, senior Jaycie Rostad gave the Majettes some breathing room. The senior made direct contact with a pitch and watched as the ball tightroped up the left-field line for an RBI single to make it a 16-14 contest.

The extra run of insurance proved to be crucial, as the Majettes held on for a 17-16 victory.

“I think the biggest obstacle was starting in the middle of our lineup,” Rostad said. “It was just kind of weird for us…We just had to get the right mindset for what the situation of the game was.”

After a short break, the regularly-scheduled doubleheader kicked off. Once again, the Majettes’ seniors made their presence known.

This time it was Morgan Theis. With her team up 2-0 in the top of the second inning, the senior sent a deep shot into right field that sailed over the head of Williston’s Rylea Iverson.

By the time she could retrieve it, Theis was already rounding second base. The senior reached third base with ease for the RBI triple to make it a 4-0 contest.

“(An early lead) just picks everyone up,” Theis said. “It really sets the tone and let’s us just keep going off of that.”

The quick start was more than enough for the Majettes to secure the win, as Minot’s defense kept the Coyotes off the board en route to the 10-0 win.

During the break, Minot held a ceremony to celebrate the careers of its four seniors. Rostad, Theis, Hailey Espe and Sophie Wedar were all brought onto the field with their parents and given a round of applause from the crowd.

“It’d been a long time coming for me,” said Rostad, who has been on the varsity team for six years. “It was really special for me to have a moment to recognize that this is the end of my career, and I want to go out on top.”

The touching moment was quickly halted, though, when Williston took control in the first inning by jumping out to a commanding 5-1 lead.

Sure enough, Minot’s seniors came through once more. The Majettes exploded for seven runs in the second inning, and none other than Theis capped off the scoring spree in style.

Leading 6-5, the senior connected on a pitch and sent a line drive into midfield. The ball eluded the outstretched gloves of Williston’s Koia Krenz and rolled all the way to the fence, allowing Theis to reach third for the triple and push the lead to 8-5.

Espe then held it down inside the circle by keeping Williston’s bats silent the rest of the way and allowing Minot’s offense to build the lead.

“After (Williston) scored, it kind of just made us want to answer and keep scoring more and more each inning,” Espe said. “We just wanted to get (the score) up there.”

Now up 12-5 in the third inning, it was only fitting for a senior to deliver the knockout.

Wedar did the honors. The senior launched a deep bomb into the outfield and turned on the jets, rounding the bases in a gold-and-maroon blur.

Williston’s outfield retrieved the ball and threw it home, but it was too late. Without even having to slide, Wedar crossed home plate to push the lead to 14-5.

Two innings later, Wedar struck again. Still leading 14-5, the senior gave fans an encore with another dazzling display of speed by sending a ball into the same area and coming all the way home. This time, the electric play forced a mercy rule and gave the Majettes a 15-5 win.

“When I was rounding third I heard coach (Cederstrom) yell ‘Get going,’ so I started bucking it,” Wedar said. “I haven’t been attacking the plate this season as hard as I should have, so it felt really good to do that, especially on Senior Night.”

Next up for Minot is its regular-season finale Monday on the road against Dickinson at 4:30 p.m.

The Majettes will be looking to end the season on a high note as the region tournament is set for Thursday.

“We’re running the bases, we’re putting the ball down and we’re hitting with power too,” Cederstrom said. “We’re showing more resiliency, and we’re starting to play more like us. That’s what we need to do.”