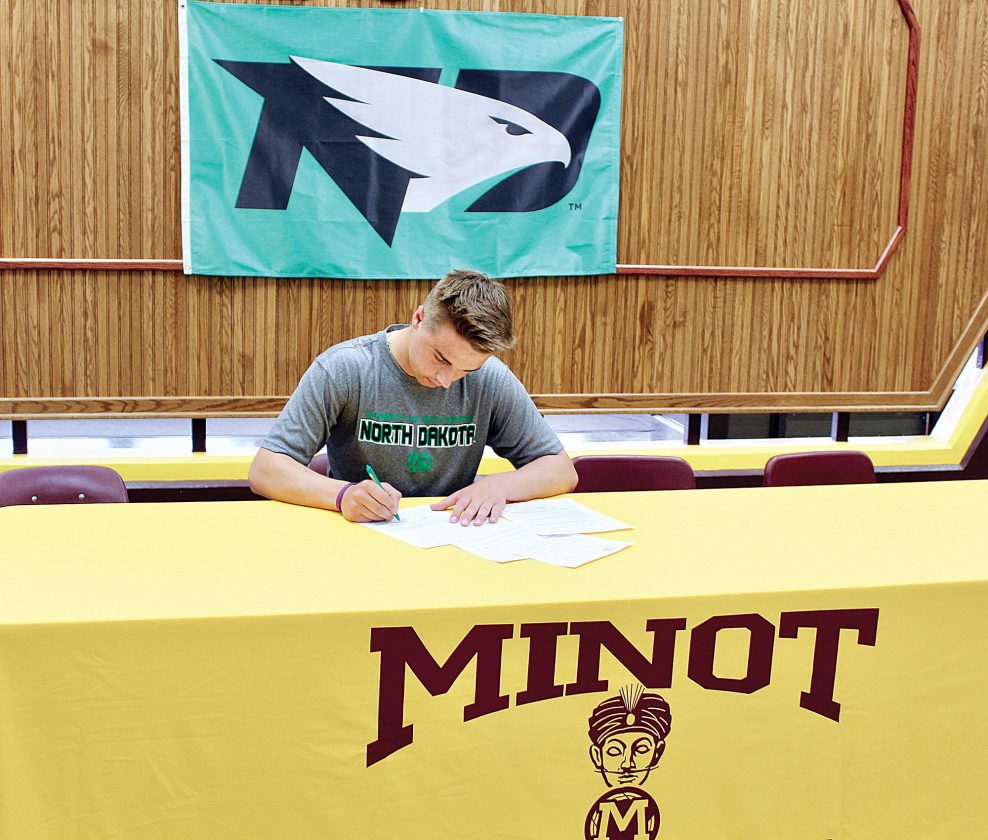 With one final meet ahead of him in his high school career, Minot High School senior Odin Nelson signed a National Letter of Intent Tuesday to attend the University of North Dakota and join their track & field program.

“I love the fact that I can keep going and continue my athletic and academic career at the same time,” Nelson said. “I’m trying to take it all in still, it seems like it’s going by so fast and now there’s a new beginning right around the corner.”

As a freshman, Nelson started his track & field career as a distance runner and pole vaulter.

“The distance running was not fun, so I wanted to try something else,” Nelson said with a laugh. “My mom told me to try javelin and I thought she was crazy.”

At Nelson’s first meet throwing javelin, he threw for 125 feet and 4 inches. From there, Nelson grew and improved at every opportunity. By the end of his freshman season, Nelson was throwing 140 feet.

“I thought at that point I could go on to throw in college,” Nelson said. “I never thought I would be going DI though.”

In his sophomore season, Nelson took first place in javelin at the Sophomore WDA with a throw of 165 feet and 11 inches. This was followed up with a second-place finish at the WDA meet with an improved throw of 172 feet and 4 inches.

He set a personal best his junior season with a throw of 189 feet at the West Region Meet, taking first place. Nelson went on to place fifth at the 2018 state championships.

Minot throwing coach Jayd Eggert is finishing her first season with the Magicians, but Nelson’s name was on her radar when she was coaching at Bismarck Century the two seasons prior.

“I’ve known Odin and his family for a long time,” Eggert said. “Odin’s gotten a lot more consistent this year which is huge. He’s just waiting on that one big throw to reach his goal.”

This season, Nelson’s longest throw has been 188 feet and 10 inches. The top five competitors in the state have all thrown over 180 feet this season and Nelson is looking forward to squaring off against them this weekend at the state meet.

With the tight competition, Eggert is looking forward to seeing Nelson hit his goal as the end of the season approaches.

“I’m just wanting him to compete,” Eggert said. “Right now, he has a whole career left, so I want him to end on a good note for his high school career.”