Majettes softball knocks off Jamestown for a spot at state 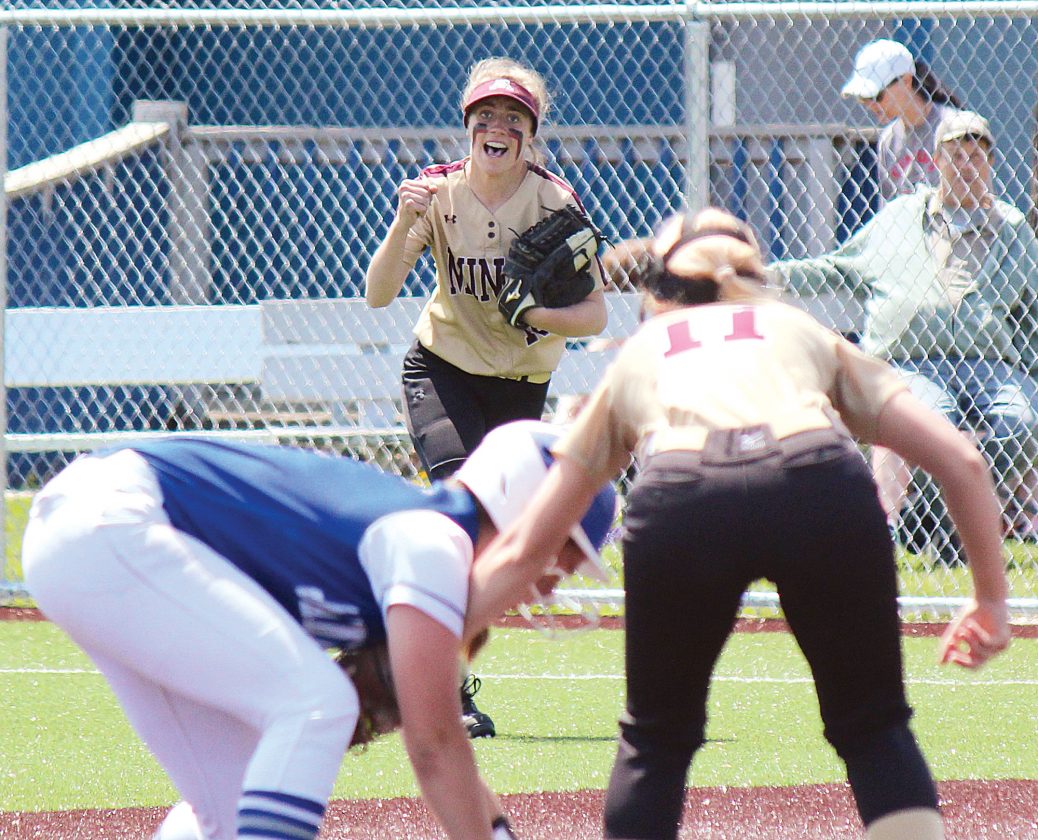 Alex Eisen/MDN Minot High senior Hailey Espe (center) celebrates after the Majettes get a tag out at second base against Jamestown in a state qualifier contest at the West Region Softball Tournament Saturday in Minot. Minot won 7-4 to advance to the state tournament.

High fly pop up into the sky. Senior Jaycie Rostad stood under the ball, squeezed the catch and unleashed an emphatic fist pump. With the final out secured, the defending state champion Majettes had earned their spot at the state tournament for a third straight season.

“This is what we work all year long for,” said Rostad, who was named the West Region Senior Athlete of the Year. “It feels so good to be able to go back (to the state tournament) and hopefully do our best there as well.”

The Jamestown Blue Jays (16-13), looking to make their first state tournament since 2016, scored first off a wild pitch in the first inning.

Rostad got the Majettes (20-13) rolling in the bottom half with an RBI sacrifice fly, and junior Cambrie Pretzer added an RBI single to put Minot ahead 2-1. 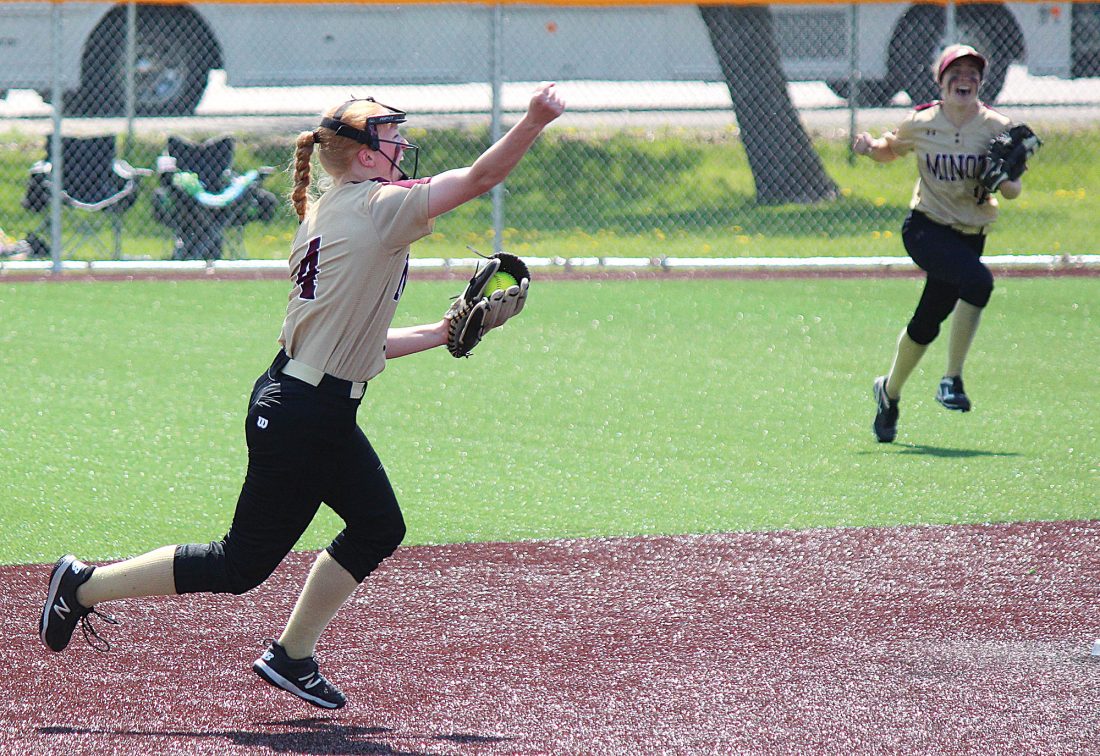 Trading punches, Jamestown responded with an RBI single to right field by McKenna Jackson in the second inning to tie the score at 2-2.

The damage could have been much worse, but MHS sophomore starting pitcher Paige Ackerman made a diving catch to escape a bases loaded situation.

“Paige threw pretty well today, she was hitting her spots,” MHS head coach Gerard Cederstrom said. “And our defense was pretty much spot on. We had a couple mistakes, but the girls just went out and played. We battled and took what we could get.”

Jailee Britt roped an RBI single up the middle off Blue Jays starting pitcher Payton Gall to restore Minot’s lead, 3-2, in the bottom half.

Minot continued to tack on runs — scoring in every inning, except the sixth inning.

In the third, Hailey Espe dropped down an RBI sacrifice bunt. In the fourth, Rostad brought in another run and also came home on a wild pitch. In the fifth, Morgan Theis reached third base off a hit and an ensuing fielding error, which also scored Minot’s final run of the game.

In the circle, Ackerman went about her business and allowed just one more run in the fifth and seventh innings.

“It’s all inside her,” Cederstrom said about Ackerman. “She knows she can do it. Yesterday, she struggled a little bit and today she was more with it. She was more herself.”

Ackerman held her own with plenty of help from her defense.

The Blue Jays loaded the bases with one out in the sixth. Minot wiggled out of danger with a grounder back to Ackerman and then Rostad got an unassisted put out with a stellar play at shortstop.

“We have to let our pitcher trust us,” Rostad said. “So, if we make the plays and show her that she can trust us, I think that makes a difference in how she pitches. She isn’t afraid to throw strikes when she know we are back there to make plays for her.”

The defense shined once more in the seventh inning with a 6-3 double play — third baseman Pretzer caught a line drive and threw over to first base for the second out. Rostad caught the final out and a mini celebration started in the circle. The Majettes, being fully aware of what lies ahead, still need three more wins to enjoy the elation they experienced a season ago.

Minot will be hosting the state tournament next weekend, May 30 through June 1, at the South Hill Softball Complex.

Joining them from the West Region will be Bismarck High, Bismarck Century and Dickinson.

Minot, like last season, will be the West Region No. 4 seed at the state tournament. The Majettes will face East Region Tournament champions West Fargo in the first round. That game is scheduled to be the final game played on May 30 with a 6 p.m. start time.