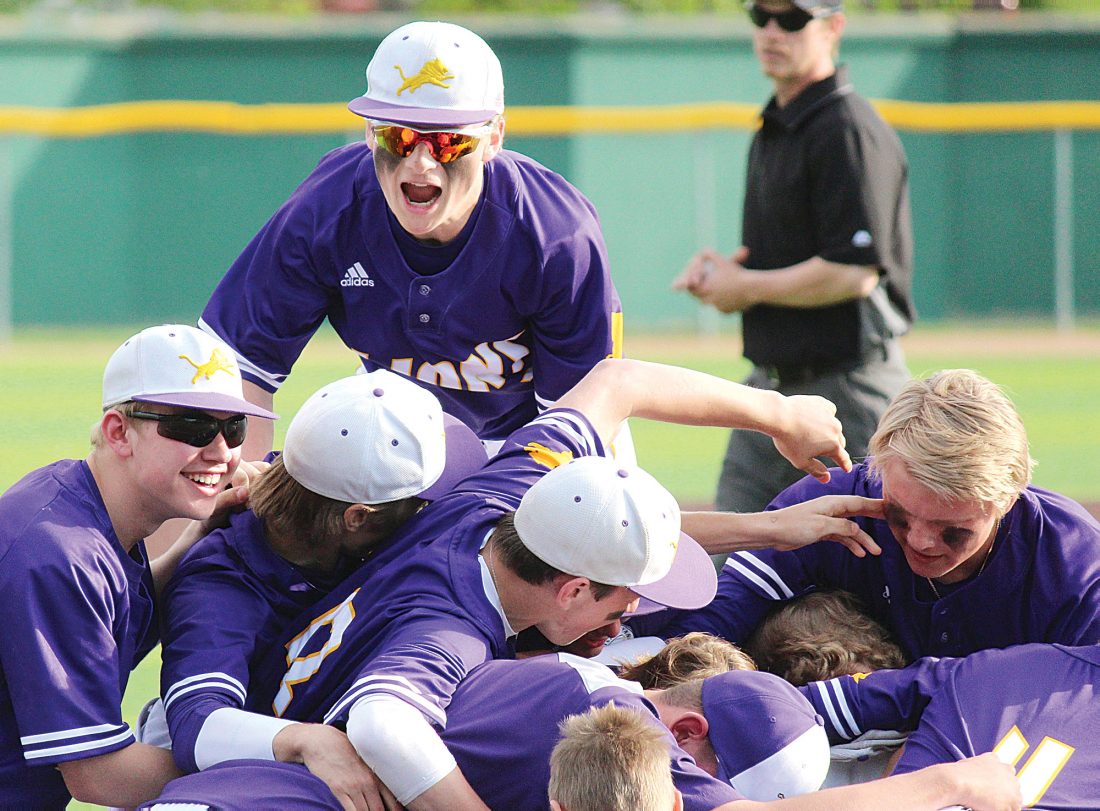 Nicholas Sanders was so amped up that he jumped up and over the awaiting arms of catcher Kersey Harris. The sophomore pitcher charged off the mound, flipped over the shoulder of Harris and took a tumble onto the turf at Corbett Field.

Sanders was greeted by a dog pile of Bishop Ryan Lions soon after.

Not the prettiest way to kick off a celebration, but it did the trick.

The Bishop Ryan baseball team is headed back to the state tournament for the second time in three seasons after securing a 9-3 victory over Surrey in the Region 6 championship game Tuesday evening in Minot.

Sanders threw a complete game for the No. 2-seeded Lions, allowing two earned runs on eight hits. He also struck out seven batters. 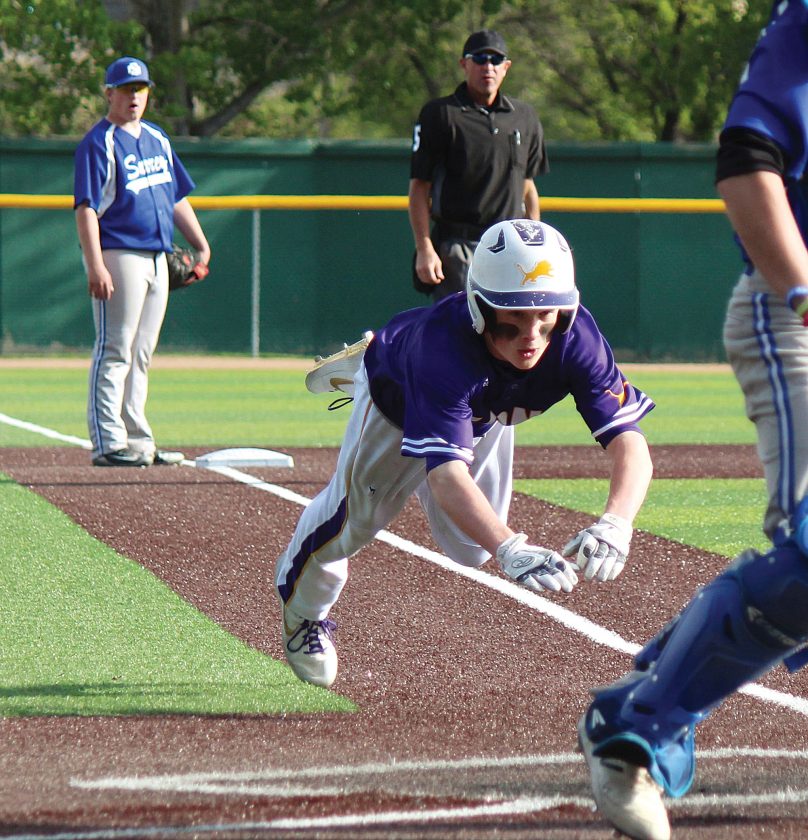 “They put runs up early and we put runs up right away to get back on top of them,” Ryan head coach Ben Magnuson said. “Really, it came down to Nick (Sanders), who threw a stellar baseball game. He gave up three hits and two runs early, but he cruised after that.”

No. 3-seeded Surrey started strong, as Ryder Holien dropped in an RBI double and a passed ball brought in starting pitcher Conner Dyke to make it 2-0 after the top of the first inning.

Ryan struck back with three runs in the bottom half. Kersey Harris sprinted around for an RBI triple, Calvin Watkins came through with an RBI single and then he scored on a stolen base plus a throwing error.

“When they put two runs on us, we had the mentality that, ‘OK, it’s time to go,'” Ryan senior Mason Hedberg said. “We picked up the bats right away and scored three runs. That really gave us the confidence we needed for the rest of the game. And Nick (Sanders) settled down on the mound and pitched great.” 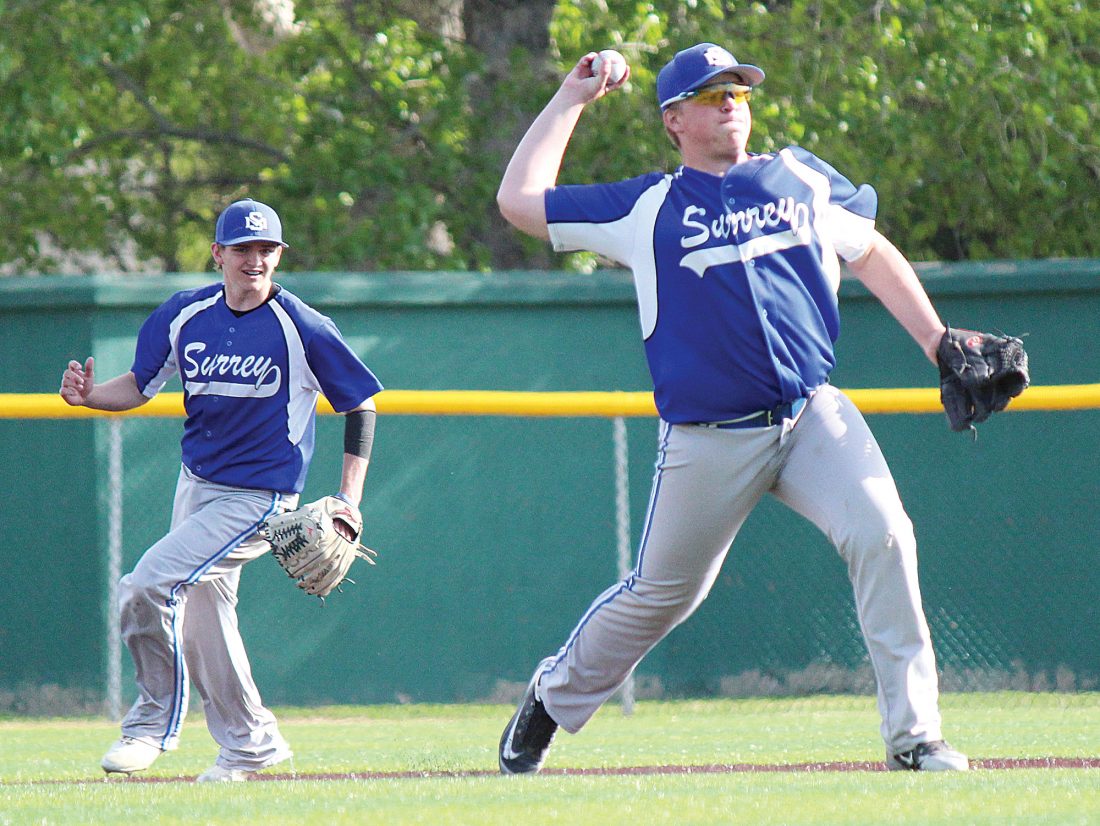 Alex Eisen/MDN Surrey third baseman Alex Hansen throws the ball over to first base Tuesday against Bishop Ryan in Minot.

Sanders drew a bases loaded walk in the third inning to increase Ryan’s lead to 4-2. It could have been more, but Surrey freshman Kekoa Munos laid out for a diving catch in center field to save a few runs.

But, the Lions kept the runs coming. Ryan scored in every inning except the second inning. Surrey just couldn’t keep up.

Jaxon Feller launched a ball to the outfield and turned on the jets for an inside the park home run in the fifth inning to put Ryan ahead 7-3.

“That got all of our adrenaline going,” Feller said. “Helped us finish the game with high energy.”

The Mustangs got their final run of the season on a double play in the fifth inning. Ryan capped the scoring at 9-3 with a bases loaded walk to Murphy Lipp and an RBI single by Seth Roedocker in the sixth inning.

Surrey left two runners on base in the seventh and final inning. Holien sent the final out to left field where Lipp made the catch.

Lead-off hitter Dalton Anderson went 3-for-4 hitting for Surrey in the loss.

Hedberg, despite going hitless in the championship game, was named the Region 6 Senior Athlete of the Year.

“This is what we have worked for all year,” Hedberg said. “I’m glad we are playing our best baseball at the perfect time.”

The Class B state tournament will be held May 30 through June 1 at the Newman Outdoor Field in Fargo.

“We don’t get to see a lot of the teams from around the state, so we don’t know what they are all like,” Magnuson said. “If we go down there and play good, solid baseball, then we will give ourselves a chance.”

In the loser-out contest played earlier Tuesday at Corbett Field to determine who Bishop Ryan would face in the championship, Surrey overcame a 7-1 deficit to abruptly end the season of No. 1-seeded Velva/Drake-Anamoose with a 9-7 victory.

“Kudos to my kids for not quitting,” Surrey head coach Bruce Mack said. “It would have been awfully easy down 6-0 to pack the bags and be done. A little perseverance goes a long ways.”

The Aggies, coming in as the reigning Region 6 champions, plated three runs in both the first and second innings to grab an early 6-0 lead.

The Mustangs loaded the bases in the second, fourth and fifth innings and only managed a single run off an RBI single by Conner Dyke.

“We left 13 runners on base in five innings,” Mack said. “It’s frustrating, obviously. Bases loaded and no outs and we don’t get anything a couple times. We had runners in scoring position and didn’t get our jobs done.”

VDA starting pitcher Tace Pederson found ways to work out of the jams, from a 1-2-3 double play to inducing numerous pop outs.

“We kind of hung on with Tace (Pederson) for as long as we could,” said VDA head coach Matt Weidler, who was named the Region 6 Head Coach of the Year. “He has battled all year for us, and last year. But, they came up with some timely hits.”

In the sixth inning, the Mustangs loaded the bases again. This time, however, they took advantage.

Following an RBI fielder’s choice, Jacob Forsman launched a ball to dead center and rounded all the bases for a three-run inside the park home run.

With one clutch at-bat, VDA’s commanding lead had been slashed to 7-5.

“When you don’t throw strikes, continue to make plays and hit the baseball for seven innings, you can be in trouble,” Weidler said.

Down to its final three outs, Surrey unloaded another four-run inning to save its season. Dalton Anderson got things rolling with an RBI triple and Dyke tied the game with an RBI single.

A double to left center by Collin Headrick gave the Mustangs their first lead, and he came home on a double steal to make it 9-7 Surrey.

In the bottom half, Mustangs starting pitcher Headrick allowed two VDA runners to reach base. But, on pitch No. 110, wrapped up the complete game with a fly ball to the shortstop.

The underdog Mustangs were off to the championship series, while VDA was left wondering what had just happened.

“Any time you end your season with a loss, it hurts,” Weidler said. “Our guys had bigger goals and I hope it hurts. But, that’s baseball.”