Majettes soccer squeezes out a 1-0 win over Bismarck High 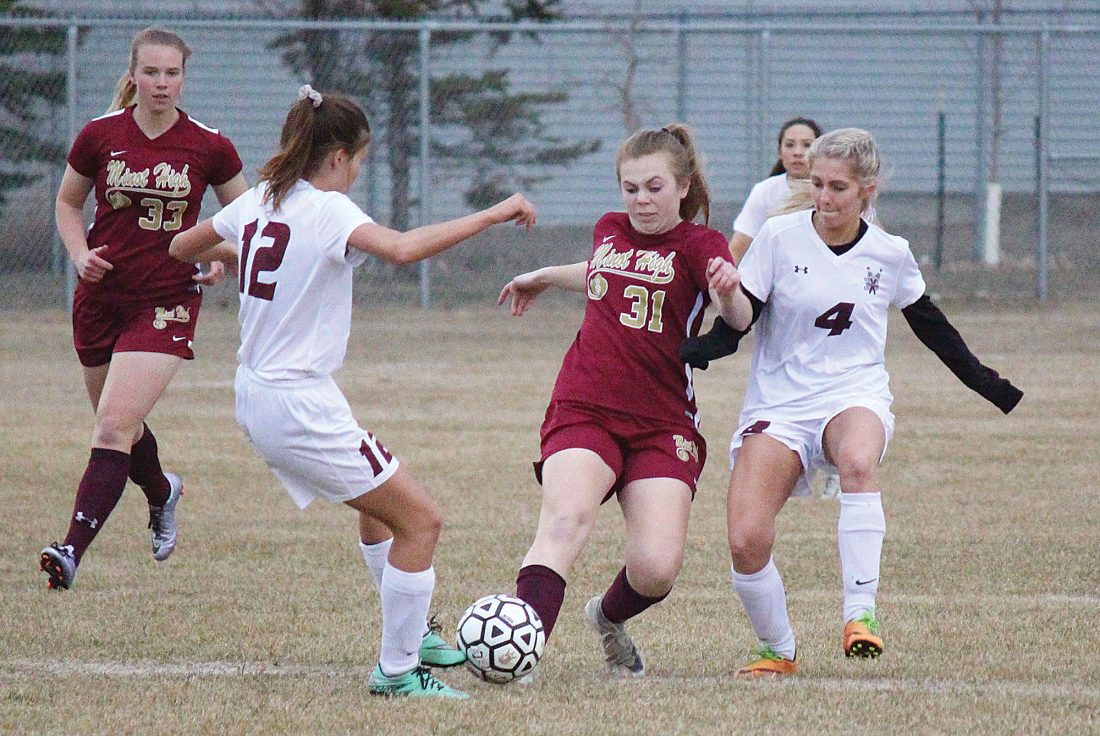 Another defensive struggle and more missed scoring chances, but the Minot High School girls soccer team made sure to get the win this time around.

MHS sophomore forward Lainey Sandberg scored the game-winning goal with 24:08 remaining in the second half.

“We have had two straight games of struggling to put the ball in the back of the net,” MHS head coach Matt Pfau said. “But, at least we found a way tonight to get our three points and stay in a spot where we are at the top of the conference.”

The Majettes controlled the possession and did everything but score in the first half. The Demons held firm with a handful of last-ditch clearances in the 18-yard box.

Minot’s closest scoring chance came off a long-range shot by Allison Lepp that smacked the left side of the crossbar.

Bismarck High countered by hitting the post from distance near the end of the first half. The ball bounced back, collided with retreating MHS goalkeeper Emelea Miller and luckily didn’t ricochet into her own net.

“Last game, we kind of had trouble scoring and tied 1-1,” Sandberg said. “We were really looking for a couple goals this game, but we just won by one and that’s all that matters.”

The Majettes broke through on a pin-point pass by Lepp. Sandberg got on the end of it and buried the only goal of the game.

“We were passing it around really well and Allison (Lepp) sent a through ball at an angle,” Sandberg said. “I ran on to it, struck it with my right foot and hit the far post.”

With 16 minutes remaining, Bismarck High’s Ellengton Hill was inches away from the equalizer as she hit the crossbar on a direct free kick just outside the 18-yard box.

Minot’s defense and Miller took a sigh of relief, cleaned up shop and didn’t allow another scoring chance in the 1-0 victory.

“I thought it was gutty,” Pfau said about the defensive effort. “(Bismarck) has some talented kids in the midfield that we knew were going to give us some problems tonight. It was just getting numbers back and trying to contain them so they didn’t get quality shots. They got three or four quality looks, but that is going to happen against a good team.”

Minot also had a 6-1 advantage on corner kicks and were given a 27-14 edge on balls won in the air. Yet, the end result was only one goal.

“We did a very good job of setting up MaLiah Burke on the right wing all night,” Pfau said. “She struck the ball well, but it was either wide or over. We just need to settle down. It’s a mental thing with us. If can break through that and have a game where we score two or three goals, we will start going in the right direction again… It’s just in their heads right now.”

The Majettes play their third straight home game in a six-game homestand on Thursday against Bismarck Legacy. Kickoff at the Optimist Soccer Complex will be at 7:30 p.m.