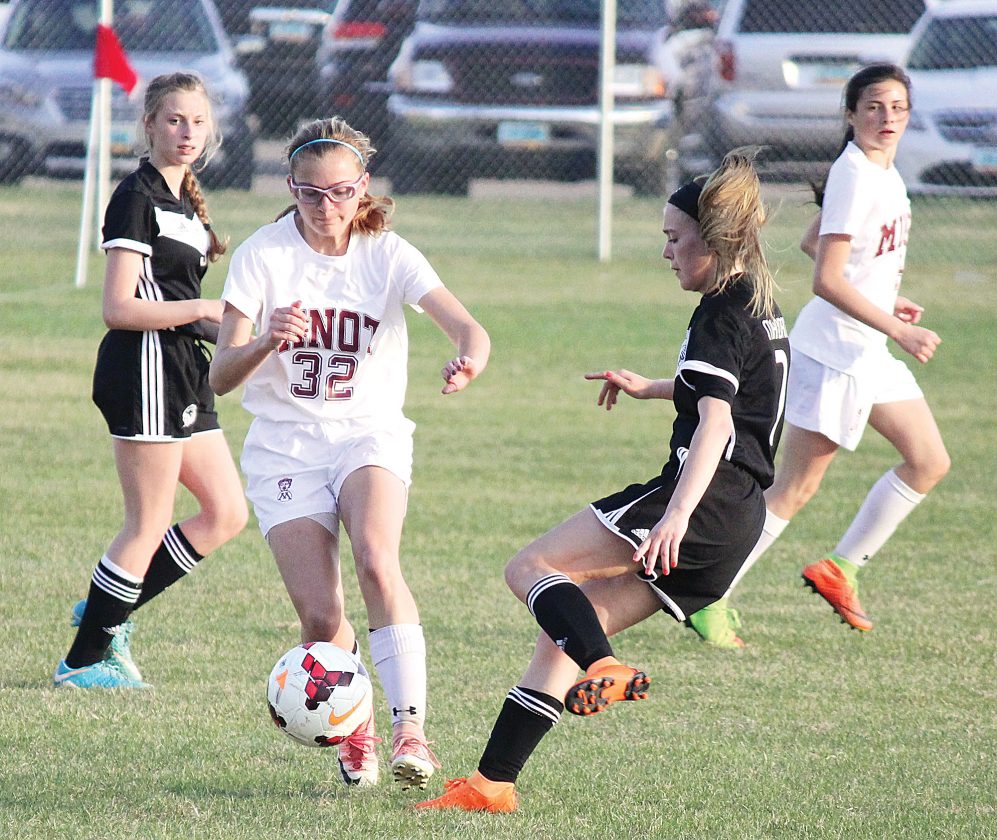 Last season featured a West Region Tournament championship in the first-ever conference tournament held for the sport, but that success was quickly overshadowed with another first round defeat at state.

The Minot High School girls soccer team is chasing after more this season. The whole conference knows this as well with the Majettes being ranked first in the preseason WDA coaches’ poll to start the new 2019 season.

“Last year, we had a very good season with a young team and now we have most of those kids back with a year of experience,” MHS head coach Matt Pfau said. “We have a chance to be very good if we work to get better every single day.”

Minot only lost four players from a season ago with the most notable departures being the graduation of All-WDA goalkeeper Becca Kostenko and forward Carly McCuaig.

There is a lot of firepower leftover to go after the program’s first state title.

At the top of that list is senior Allison Lepp, who was named the 2017-18 North Dakota Gatorade Player of the Year and is a two-time First Team All-State midfielder. She scored a team-high 17 goals and provided five assists last season.

“She does so much for us,” Pfau said about Lepp. “A lot of the time, people just see that she scores a lot of goals. But, she is a kid in the middle of the field that is running the whole field. She is just as good defensively for us as she is offensively. She is a leader and in big situations, she is always calm on the ball and gets us settled down.”

“We have most of the same players from last year, so we are trying to do the same things,” Sandberg said. “Build up from the back and pressure hard at the front… We don’t want the same outcome that we had last year at state, so we are working really hard so we can get past the first round and get farther this year.”

Adding more about Lewis, Pfau said: “She has been really good in practice so far. Just her placement on shots, I feel like she has almost went to the next level with that.”

Freshman Morgan Perrin will play alongside Lepp in the middle. Fellow freshman midfielder Arin Oster will likely get more minutes off the bench to backup Lepp and Perrin.

Out on the wings will be speedsters MaLiah Burke and Brooklyn Casey.

“We got a ton of speed on the wings,” Pfau said. “To incorporate that with Allison (Lepp) and Lainey (Sandberg) in the middle of the field, then offensively we should be very good.”

Defensively, the backline will feature three starters from last season with sophomore Zoe Weishaar in the sweeper role, plus junior Olivia Lewis and senior Claire Weltz playing on the outside.

Playing the stopper in front of Weishaar will be sophomore Kaitlyn Weaver, who moved around and played a bunch of different spots for the Majettes last season.

“All four have experience on varsity,” Pfau said. “But having three that have already played together in the back will be huge, especially with our communication.”

Trying to fill Kostenko’s gloves in net will be a pair of freshmen in Emelea Miller and Madison Elliott.

Miller played in the field a little bit last season and even stepped in for an injured Kostenko in the state tournament fifth-place game last season. She made a handful of saves in a 3-2 shootout victory.

“That’s pretty impressive for her first game experience in a big spot,” Pfau said. “Both goalies have looked good in practice. We will have to make a decision on how we will split the time with them.”

The Majettes have lost to Shanley/Oak Grove/Park Christian in the first round of the state tournament the past two seasons. Nobody wants to experience that again.

“We did so good in the WDA, then we got to state and it kind of fell apart,” Perrin said. “We don’t want to do that this year, and I feel like all the work we have put in is going to help us.”

At the same time, Minot can’t get caught looking too far ahead.

“The biggest thing for us is getting over that Thursday (first round) game at the state tournament,” Pfau said. “Obviously, we aren’t going to talk about that now. That has been a thing that has haunted us. Just one game at a time right now.

“But, big picture, we think we can compete with anybody in the state.”

The Majettes open their new campaign at 7:30 p.m. this evening in Jamestown. Minot’s home opener is against Bismarck High at 7:30 p.m. April 16 at the Optimist Soccer Complex.