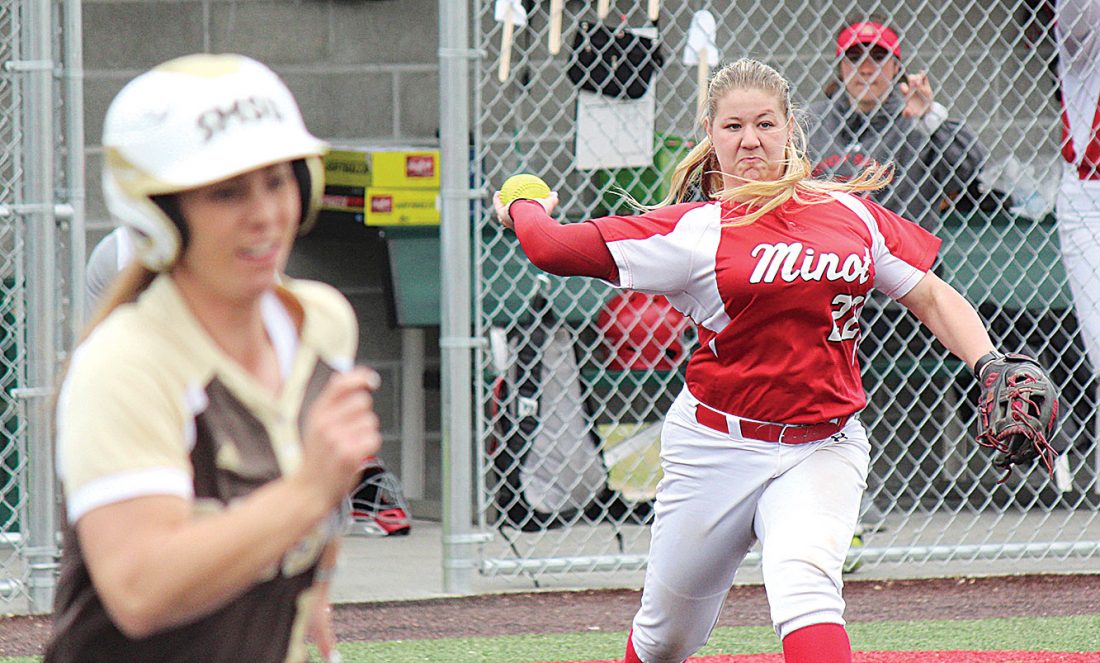 Alex Eisen/MDN Minot State infielder Karlee Coughlin (22) winds up to throw the ball over to first base in the first game of a doubleheader against Southwest Minnesota State at the South Hill Softball Complex.

Coughlin scored MSU’s only run, via a solo home run, in a 4-1 Game 1 defeat and then went 3-for-4 with three RBIs, including a walk-off RBI single in the eighth inning, to lead the Beavers to a 9-8 victory in Game 2 at the South Hill Softball Complex.

Two of the Beavers’ four seniors being recognized on the day pitched in the contest: Laura Mendez and Kylie Patrick.

Fellow senior Melissa Estrada, normally a pinch runner, drew a bases loaded walk in Game 2 for her first RBI of the season.

That was part of a six-run third inning, which put MSU up 6-1.

The Mustangs clawed back and with two runs in the seventh inning, forcing extra innings at 8-8.

A clutch double by MSU’s fourth and final senior Lauren Cowden brought Coughlin to the plate with runners on second and third base with nobody out in the eighth inning.

Coughlin shot the ball back up the middle to end the game.

MSU freshman pitcher Zoya Robbins threw all eight innings to get the win in the circle.

The Beavers are scheduled to play their final home doubleheader on Wednesday (April 24) against Minnesota Crookston. First pitch at 2 p.m.

MSU closes out the regular season with road doubleheaders against Upper Iowa (April 27) and No. 7 nationally ranked Winona State (April 28).