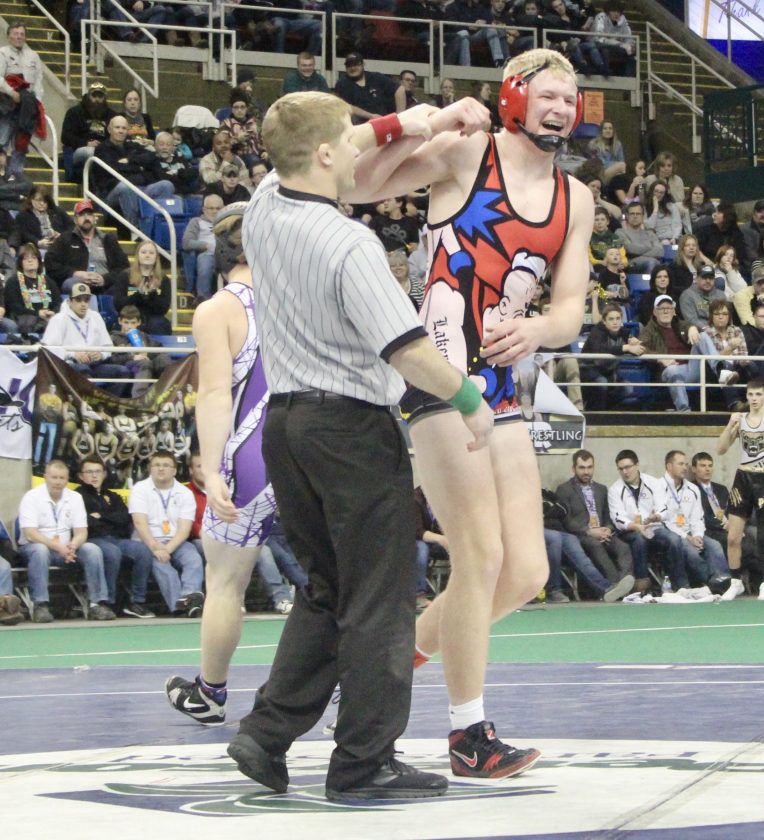 Justin Martinez/MDN Des Lacs-Burlington junior Coy Spooner gets his arm raised Saturday at the Fargodome after defeating Harvey/Wells County’s Bailey Lawson, 7-2, in the 195-pound championship round of the Class B state individual tournament.

That’s the only way to describe Coy Spooner’s season After posting an unblemished 40-0 record in the regular season, the Des Lacs-Burlington junior finished off his legendary year on Saturday at the Fargodome in the most fitting way possible.

Spooner cemented his name in the history books, defeating Harvey/Wells County’s Bailey Lawson in the championship round of the Class B 195-pound bracket by a score of 7-3 to claim his first state title.

“I can’t even describe it,” Spooner said. “I always hear people say that you don’t really feel it at first, and I didn’t know if that was true or not. But right now I’m just feeling a great amount of joy.”

For Spooner, that euphoric feeling is a 180-degree turnaround from his experience in that same arena just one year prior.

Spooner found himself on the doorstep of a state title last season. The then-sophomore reached the 170-pound championship match as the No. 3 seed, where he took on Hillsboro/Central Valley’s Mark Hastings.

Hastings placed himself in the drivers seat from the start and never relinquished control, dominating Spooner for an 11-3 victory. The crowd erupted with applause when the final whistle sounded as Hastings celebrated with his coaches and soaked in the glory.

“It definitely makes you want to come back and be on top of the podium,” Spooner said. “It’s hard to be that close and not accomplish it.”

Undeterred, Spooner went back to work in the offseason. There with him every step of the way was his father, Nolan Spooner. For as long as Coy could remember, that was always someone he could turn to.

Nolan got Coy into wrestling at the age of four. A high school coach for years, the father taught his son the fundamentals, passed on his love of the sport and encouraged him through milestones and setbacks alike.

The 2018 championship loss was no exception.

“I told him, ‘It’s not an easy sport, and somebody has to lose,'” Nolan said. “Was (Coy) hungry? Absolutely. Was he mad? Yeah. I hate to see my son lose, but I knew it’d motivate him.”

Sure enough, Coy came back better than ever for his junior season. The standout Laker shredded his competition en route to a 40-0 record and earned the coveted No. 1 seed in the 195-pound bracket of the Class B state individual tournament.

With a perfect regular season, Coy knew that would bring the best out of his upset-hungry competitors.

“It definitely puts a target on your back,” Spooner said. “Some people would say that there’s a little bit of added pressure, but pressure is a privilege. You have to go out and perform no matter what seed you are and no matter what your record is because anything can happen at state.”

Even with that target on his back, Spooner showed no chink in his armor in the first three rounds. The junior earned two falls and a 13-0 major decision win en route to the title match against Lawson.

This time, Spooner had no intentions of leaving empty handed.

Spooner set the tone just 25 seconds into the first period by overpowering Lawson for a takedown. Now leading 3-0 in the second period, Spooner delivered an encore with another powerful takedown to push his lead to 5-0.

Lawson managed to get three points in the final period, but it wasn’t enough. The final whistle sounded with the score reading 7-3 in Spooner’s favor.

The junior rushed off the mat and jumped into the arms of the DLB assistant coach in celebration. That coach was none other than Nolan.

“It’s something you dream about as a dad,” Nolan said. “You play it over and over in your mind, but until it happens, it’s really remarkable… when it’s meant to be, it’s meant to be.”

With a state title now under his belt, Spooner will return to the Lakers’ wrestling team for his senior year in pursuit of his second individual championship.