From fan to phenom, Amsbury has found his role with MHS soccer 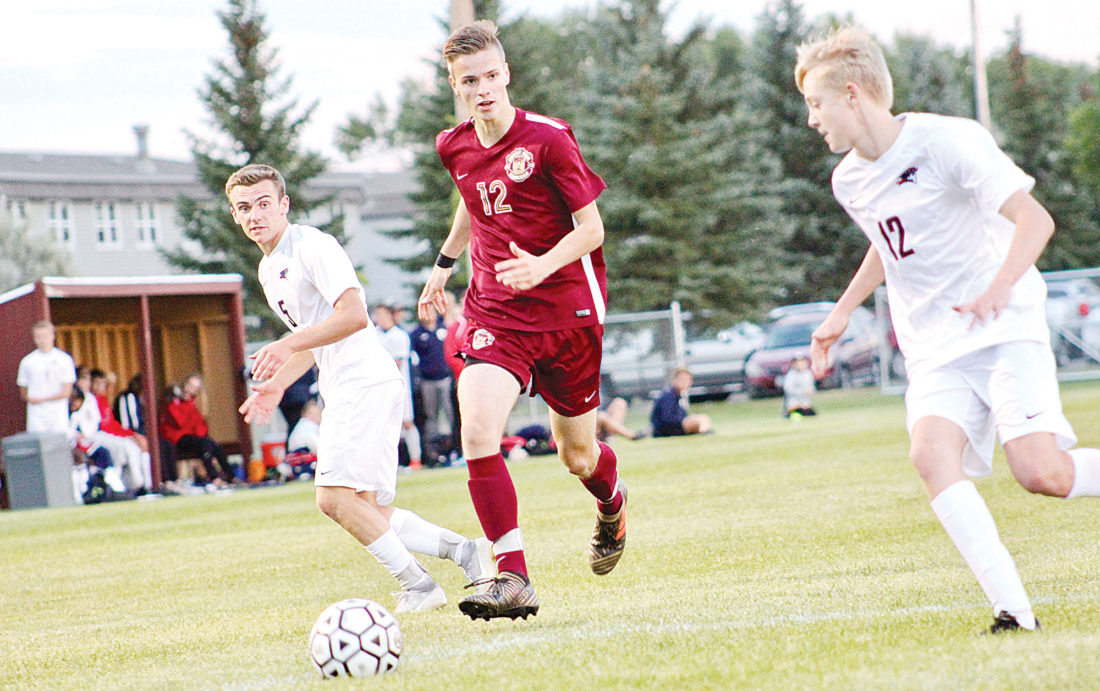 Senior Courage Amsbury races toward the ball as a Century defender closes in during Minot's 5-0 loss to the Patriots on Sept. 4 at the Optimist Soccer Complex.

Courage Amsbury was out of his element.

It didn’t take much to point out the new guy at practice for Minot F.C., a local youth soccer club, last November. Amsbury, a cross country and track runner for Minot High School, always admired soccer from afar.

He enjoyed watching professional teams such as Tottenham F.C. make the sport look easy on television, gliding across the field with the ball seemingly on a string tied to their feet.

After some persuading from Minot High team captain Cody Burke, a friend of Amsbury since the seventh grade, the senior decided to try organized soccer for the first time. If all went well, Amsbury planned to try out for the Minot High boys soccer team in August.

All did not go well.

Amsbury had the speed and the daunting six-foot frame, but the 18-year-old forward didn’t know how to apply his skill set on the field. He couldn’t understand basic schemes and quickly found himself struggling to keep pace with the rest of the guys.

“(The first practice) didn’t go so great,” Amsbury said. “You could just tell I was the worst player there by far. You could’ve put an 11-year-old girl out there and she would’ve destroyed me.”

Amsbury walked off the field that day with his confidence shot. That’s when Burke came in. He knew what his best friend was capable of, so he pushed Amsbury to keep working.

“I knew Courage was naturally athletic, so I wasn’t worried about him,” Burke said. “I just told him to keep showing up to practice because all it takes is time to get used to touches with the ball.”

So, Amsbury put in the work. He met with Burke on weekends to polish his fundamentals and played as many club games as he could over the next eight months.

Amsbury soon began to stand out at practice for all the right reasons, as other players found themselves trying to keep pace with him.

That hard work paid off in early August when Amsbury put together a strong three-day tryout with Minot High. At the end of the third day, head coach Creighton Bachmeier posted a list in the team locker room that stated who made the cut.

With everyone else crowding around the list, Amsbury walked over to it and saw his name. He had made the Magicians’ varsity team. The news brought both excitement and concern to the team’s latest addition.

“I knew that I had a good tryout,” Amsbury said. “But even when I found out I made the team, I wasn’t sure how much I was going to actually be able to help. I just wanted to contribute as much as I could.”

Making the team only fueled Amsbury more as he became a true student of the game. The young prospect asked Bachmeier questions every chance he got at practice, eager to increase his soccer IQ.

“(Amsbury) came in on Day 1 ready to compete,” Bachmeier said. “He asked all the right questions and adapted quickly. You could just tell he was there not only to compete for a spot on the roster, but for a starting spot.”

Amsbury got his wish on Aug. 18 when he cracked the starting lineup in the team’s season opener against West Fargo. The senior forward scored the only goal for the Magi, boosting his confidence to an all-time high.

The stakes got raised on Aug. 23 when the Magi hosted state powerhouse Bismarck High in their home opener. With the fans cheering and the lights shining down on him, a rush of uncertainty came over Amsbury as he walked onto what marked the biggest stage of his young career.

“I was very nervous,” Amsbury said. “Bismarck is such a good team, so I wasn’t sure how it was going to go for us. I just tried to stay focused.”

The Demons enforced their will from the start, leaving the Magi on the defense for most of the match. Amsbury and his fellow attackers had no answer, as they struggled to generate any offense against the impenetrable Bismarck back line.

The cheers of the home crowd gradually died down as Bismarck held a commanding 2-0 lead with just under three minutes left to play. But, Amsbury wasn’t going to go down without a fight.

The senior found a hole on the left side of the Bismarck back line and called for the ball. Junior forward Noah Schmidt saw the chance and launched a pass in his teammate’s direction. The ball went long, leaving Amsbury in a footrace with two Demon defenders.

Amsbury turned on the jets, gathered the ball and sprinted toward the goal. With the defense closing in, he took his shot from around eight yards out. The ball exploded off his right foot, bent around the Bismarck goalie and smacked the lower-right back of the net.

A roar of applause erupted from the crowd as Amsbury ran along the student section, the same one he used to cheer from as a fan last season, with his arms stretched out.

“It was such an awesome feeling,” Amsbury said. “I always enjoyed cheering on the team when I was a fan, so to be the one to bring the crowd back into the game was exciting.”

Although the Demons prevailed, 2-1, Amsbury proved he could hang with the best of the best. That momentum carried into the following match against Bismarck Legacy on Aug. 30 when the forward scored two goals in a blowout 6-1 win.

That same player who fought for a roster spot in August is now one of the leading scorers for the Magi this season. Amsbury has found his role, but more importantly, he’s found a second family in the team.

“We’re a really close group,” Amsbury said. “We hang out a lot outside of school, and I really love these guys. It just makes me want to compete even harder for them.”

It’s that tight-knit atmosphere that makes the whole process worth it for Amsbury. He isn’t motivated by a dream to one day play professional soccer, and he isn’t concerned with individual statistics. Rather, he just plays for the guy next to him.

And with the rest of the season still ahead of them, Amsbury and the Magi are only getting started.

“I have a passion for soccer,” Amsbury said. “I didn’t expect to be able to play this well at first, but now that I’m here, I just want to help this team win. It’s our time.”

Sports Spotlight is a weekly feature profiling interesting people affiliated with sports in the region. We welcome suggestions from our readers. Email the sports department at sports@minotdailynews.com.