MSU volleyball takes a set in loss to No. 3 Northern State 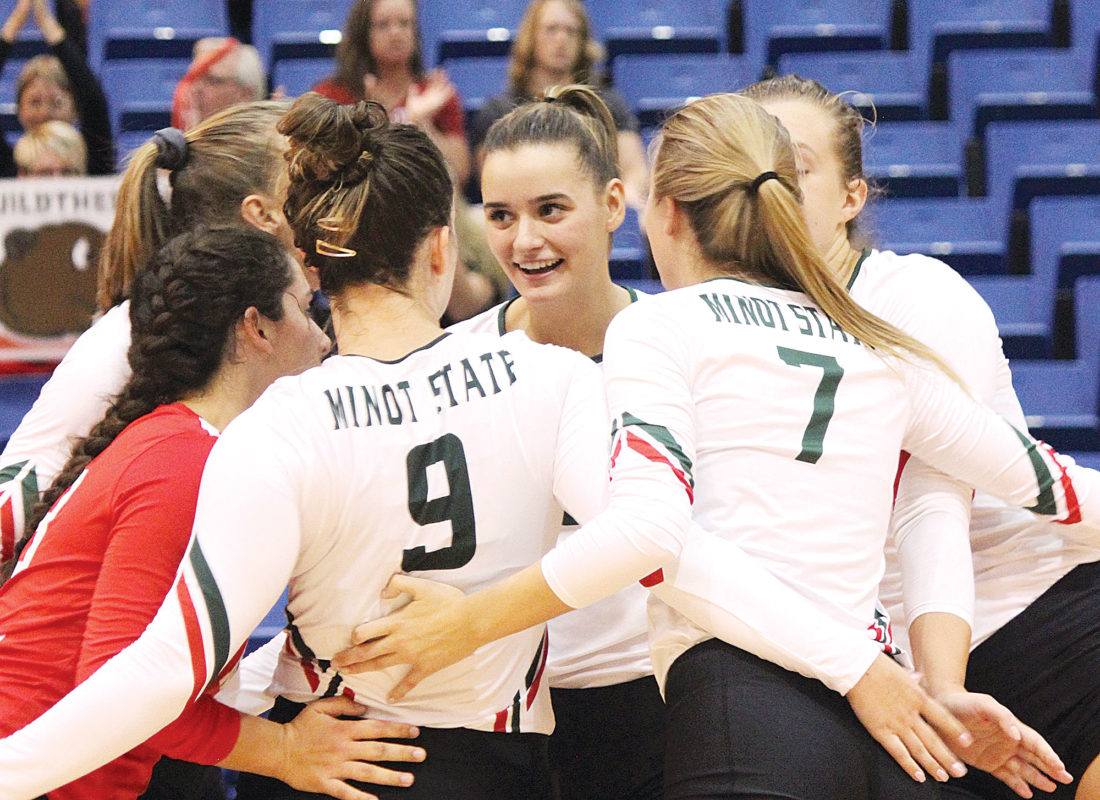 Alex Eisen/MDN Minot State junior Jeanne Brenner (center) in the middle of a Beavers volleyball huddle Saturday afternoon against No. 3 Northern State at the MSU Dome. The Beavers lost 3-1.

Coming in with a 0-20 record against Top 5 ranked Division II opponents since joining the Northern Sun Intercollegiate Conference in 2012, the Minot State volleyball team had history firmly against them Saturday afternoon against No. 3-ranked Northern State at the Minot State Dome.

“It’s huge for us to even compete with a team like that, let alone take a set off them,” MSU junior outside hitter Jeanne Brenner said. “So, this is a big step in the right direction for us.”

It’s the second time in program history that the Beavers have been able to win a set against a Top 5 ranked Division II opponent. The only other occasion came on Oct. 25, 2013, in a 3-1 loss to No. 1-ranked Concordia-St. Paul.

“I think you have to be proud when you take a game from the third-ranked team,” MSU head coach Dana Cordova said. “But, you saw that we could have also taken two games from them… (Northern State) plays with a lot of confidence and like I told our girls, we need to start believing and having some swagger about us.”

MSU started fast and set the tone in set one. Junior Shelby Spuller got the match started with a kill and the Beavers jumped out to a 12-6 lead. That forced NSU into a timeout after Hayley Swain put down one of her three kills in the contest.

“We realized, ‘Oh, shoot. We can actually compete with them and keep this going,'” said Brenner, who contributed eight kills. “And then I think we kind of psyched ourselves out by not just playing and thinking too much about what we are doing and getting nervous about it.”

The MSU lead was short-lived. The Wolves fought back to even the score at 14-14 following a handful of attack errors from the Beavers.

MSU finished with 29 attack errors in total, leading to its downfall in set one and set two.

“We got to limit our mistakes,” Cordova said. “We were making a lot of mistakes and they weren’t really doing anything to us. It was just a lot of our mistakes. We started not controlling what we can control.”

The Beavers fended off set point twice in the opening frame with a kill by Shae Pedersen and an attacking error from NSU’s Sally Gaul.

The Wolves, regrouping out of a timeout, turned to Gaul once again and this time she finished off the first set with a powerful kill, 25-23.

NSU was now rolling and couldn’t be stopped in the second set. With libero Jaiden Langlie serving, the Wolves went on an 8-0 run to take a commanding 21-3 lead.

MSU scrapped out a few points before conceding a 25-8 second set defeat.

“The second game was ugly. Really, really ugly,” Cordova said. “In the past, this team would have said, ‘OK, we are done.’ But, they came back and they fought.”

After being outplayed badly in the second set, the Beavers were on the verge of getting swept in back-to-back matches to start conference play.

But, a fierce intermission speech from Cordova restored the Beavers to their first-set form.

“Coach had a big part of that,” Brenner said about the Beavers turnaround. “She told us to do what we do in practice, practice how we play and play bump-set-hit-block-defend. Just get back into it and don’t overthink anything.”

MSU grab the lead for the first time in set three with the help of a 6-0 run. And they never relinquished it, despite the Wolves getting within a point at 17-16.

The Beavers even closed out the set strong, winning the last three points on a kill from Spuller, an attack error and a bad set.

Unhappy with dropping just their second set all season, the Wolves weren’t messing around in the fourth set. MSU hung around until a 12-8 deficit turned unmanageable at 20-10.

Laura Snyder’s 13th kill for NSU closed out the fourth set, 25-14. She was one of three Wolves to finish with double-digit kills, along with Jenna Reiff (17) and Hailey Busch (14).

MSU was led by Spuller with 13 kills and eight digs. Emily Falldorf had 10 kills and three blocks. Setter Kelsey Dewulf tossed up 38 assists and libero Karli Koza picked up 20 digs.

The Beavers head to Bismarck on Tuesday to face the University of Mary.

“Absolutely,” Cordova said when asked if the team can build momentum off the NSU defeat going into Bismarck. “We can’t let who the other team is dictate what we do. We got to worry about the name on our jersey and not the name of our opponent. If we go in there and concentrate on us and what we can do, then we are going to be OK come Tuesday.”