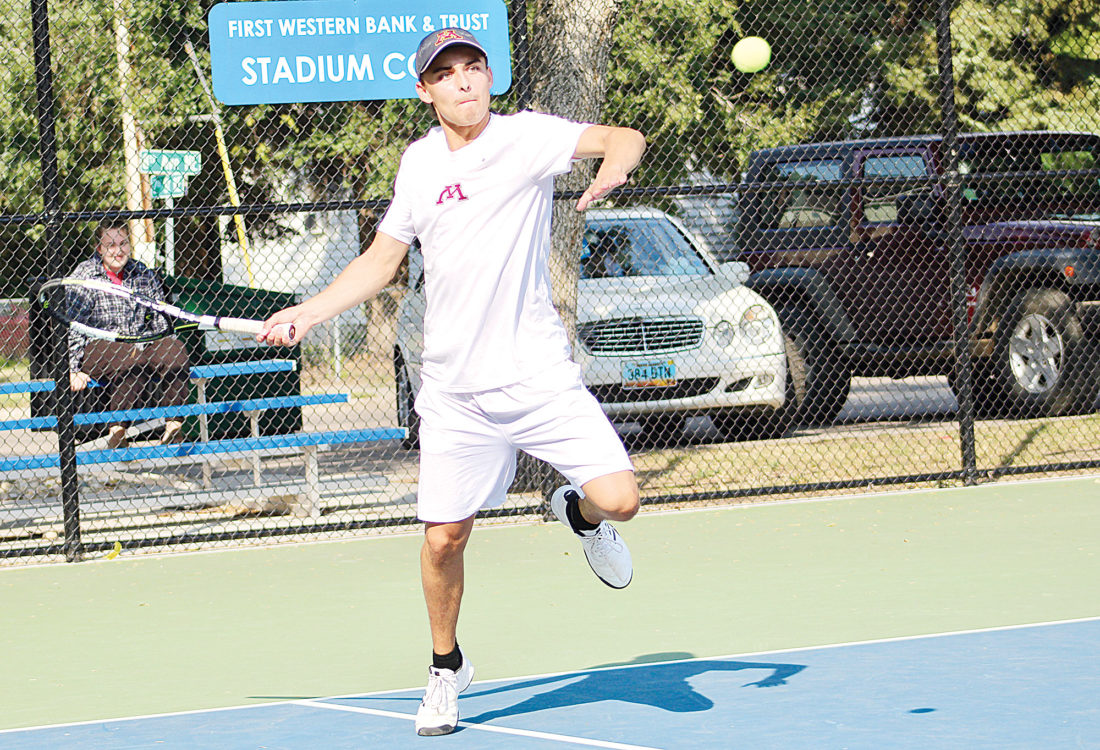 Justin Martinez/MDN Senior Mason Diehl winds up for a return in Minot High's match against Grand Forks Central on Friday at Hammond Park.

The Magi (5-3, 1-0 WDA) lost both non-conference matches in back-to-back sessions on their home courts, falling to the GFRR Roughriders 5-2 and being swept 7-0 by the GFC Knights.

Minot’s run of eight home events to start the season now comes to an end. The Magi hit the road for the first time this season to face Mandan at 4 p.m. next week Thursday (Sept. 13).

MANDAN — The Minot High girls swimming and diving team put up a strong performance against the Mandan Braves at the Mandan Aquatics Center Friday evening. The Majettes took the dual 126-60 over the Braves.

In each of the relays, Minot High took first in each event. The 200-yard medley relay team of Iris Jessen, Rylie Webb, Emily Brugman and Brooklyn Filler took first with a time of one minute 58.38 seconds. Minot’s ‘B’ and ‘C’ relays finished third and fourth.

Zaderaka, Elise Altringer and Allie Elliott finished first, second and third in the 50-yard freestyle, scoring a total of 13 points for the team.

Brugman took first in the 100-yard freestyle with a time of 58.54 for Minot High.

The Majettes jump back into the pool today at the Bismarck State College Aquatic Center. The invitational begins at 10 a.m.

BISMARCK — The Minot High School girls golf team finished third for the fourth time this season on Friday at the Bismarck Invite held at the Tom O’Leary Golf Course.

Century picked up its fourth win of the year entering the halfway point of the season. The Patriots shot a 319, led by the duo of Hannah and Leah Herbel. The twin sisters finished 1-2 with Hannah carding a 74 to beat Leah by two strokes.

The Majettes, with a team score of 340, placed on the podium with senior Joelle Fettig and junior Becca Tschetter both shooting an 80 to tie for fifth place.

“Joelle (Fettig) tied her personal best of the season with an 80,” MHS coach Scott Foltz said. “Becca (Tschetter) played the first two holes three over par and finished the remaining 16 holes at plus-8.”

It was a challenging day out on the course.

“Tom O’Leary played a lot harder than its yardage would indicate,” Foltz said. “An awful lot of uphill and downhill shots.”

Still swinging for their first win of the season, the Majettes head back to Bismarck on Tuesday for the Legacy Invite being held at the Riverwood Golf Course.

WATFORD CITY — The Minot High School volleyball team couldn’t finish off close sets and fell to 5-6 overall (1-4 WDA) on the season with a 3-1 road defeat at Watford City, a school in its first season at the Class A level.

“Watford was incredibly scrapy — would not let anything hit the floor,” MHS coach Sherry Carlson said. “We played tight, afraid to lose and just couldn’t get a rhythm going. I had to make muliple changes in the line-up.”

The Majettes return to the court this afternoon at 3:30 p.m. in Dickinson.