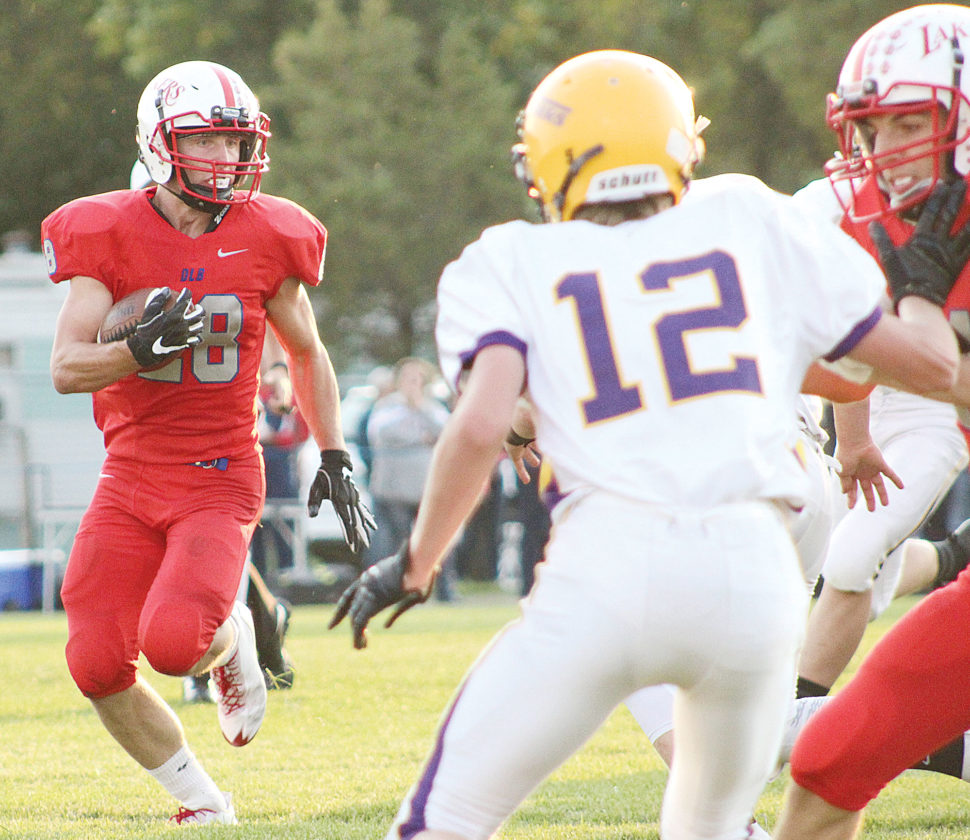 Dante Gunville strolled up to the line of scrimmage, ready to give the home crowd something to cheer about.

The junior quarterback for Des Lacs-Burlington already had a 20-0 lead to work with over Lewis & Clark-Berthold/Our Redeemer’s with just under six minutes remaining in the second quarter. Now, the Lakers had their sights on the knockout punch.

Gunville took the snap, faked a handoff to running back Caleb Bonness and paused for a quick second. The Bombers took the bait, swarming the senior running back.

When they realized their mistake, they turned around to see Gunville waltzing into the end zone, untouched, for the 20-yard score.

It was that kind of night for the Bombers.

Des Lacs-Burlington (2-1, 1-1 Class A Region 3) put on a show at home Friday night, clobbering nearby rival Berthold, 49-0, in a game that was over from the opening kickoff.

“I’m really proud of how our football team played tonight,” head coach James Johnson said. “We have some young kids on this team, but you could really see their confidence grow as the game went along.'”

Bonness set the tone for the Lakers in the opening quarter, running for 76 yards. The highlight came with 8:44 remaining as the 160-pound bruiser punched it in from one yard out. After a failed two-point conversion, DLB entered the second quarter with a 6-0 advantage.

But Bonness was only getting started. The senior found the end zone once again with 10:30 remaining in the second quarter, driving down the heart of the Bomber defense for a 18-yard score.

Things only got worse for Berthold (2-1, 1-1 Class A Region 3), as Lakers running back Brayden Bonn got in on the action. After junior wide receiver Jameson Lesmann got the team to the goal line with a 46-yard reception, Bonn crossed the end zone for a two-yard score.

DLB went on to score another two touchdowns before entering halftime with a commanding 34-0 lead.

“It was a big confidence boost for us as a team to come out strong,” Bonness said. “We’re always excited to play Berthold, and it was good to be able to establish our run game early.”

Not much changed in the second half, as the Lakers entered cruise control. Lesmann produced the only score of the third quarter for either team, blazing past his defender and hauling in a 25-yard touchdown pass from Gunville with 5:10 left on the clock.

A late fourth-quarter touchdown catch by Lakers junior Grayson Pease proved to be the final score of the game to secure a 49-0 DLB win.

Although the offense produced the highlight-reel plays, the win also marks an impressive performance by the Lakers defense. The group never lost focus, shutting out a Berthold team that entered the game with an unblemished 2-0 record.

“Our main goal was to stop the run,” Johnson said. “We knew (Berthold) had a good quarterback that could run well, and we did a good job of stopping him. We were just a smart group tonight.”

After suffering a blowout 44-14 loss to Velva on Aug. 31, the Lakers now enter their next matchup against Bishop Ryan on Friday with momentum on their side.

“We’re excited,” Bonness said. “It’s big to be able to get past those bumps in the road, and we’re looking forward to chasing our goals as the season moves on.”