Minot stumbles at home against Legacy, 3-0 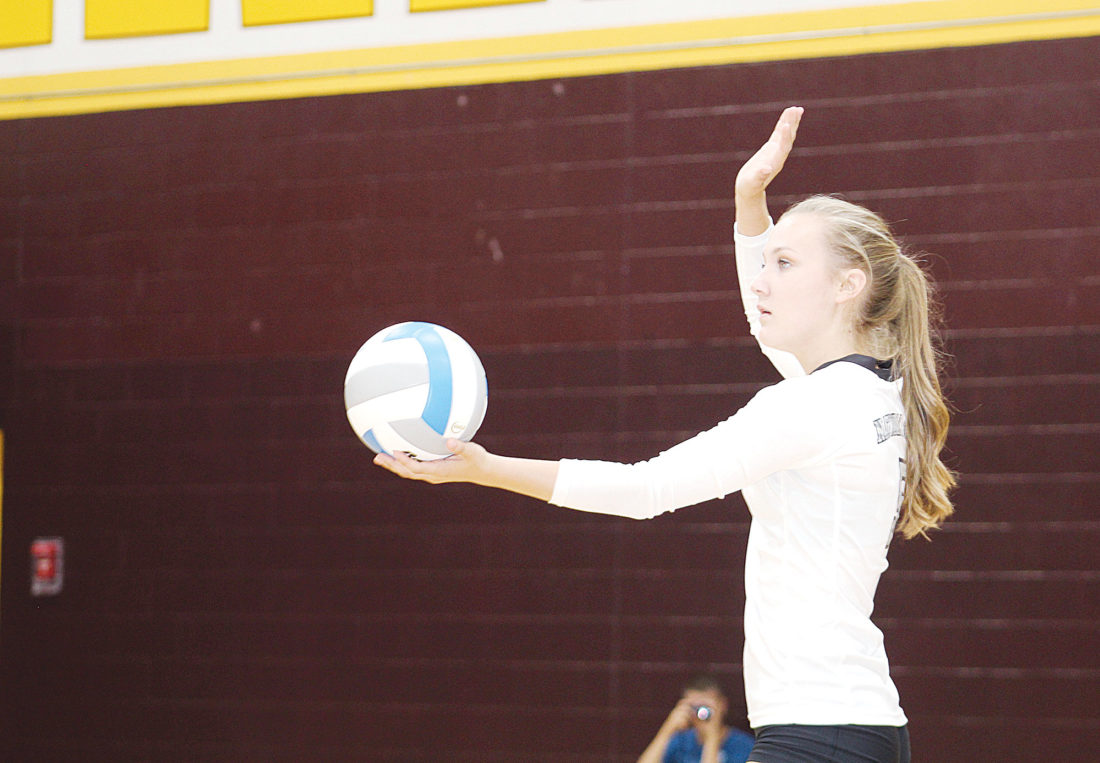 Even in a crushing defeat, the Majettes held their heads high.

Minot High School volleyball team ran into a roadblock on Tuesday, falling at home to Legacy, 3-0, in a game where the Majettes couldn’t keep pace.

“We knew that Legacy was going to be tough,” head coach Sherry Carlson said. “They’re different than teams we’ve seen so far this season, but overall I thought my girls played hard tonight.”

The night started off with a heartwarming moment as the Majettes paid tribute to those who lost their lives 17 years ago during the September 11 attacks. The team had a special surprise, welcoming its loved ones who had served in the military onto the court before singing the national anthem as a group.

It was a moment that brought tears to both fans and players alike as the team was met with a roar of applause once they finished.

“It was a really cool moment,” senior Morgan Theis said. “We just wanted to show (those serving) that we appreciate all they do. Their courage and bravery is something that inspires us.”

But the energy pulsating through the stands quickly died down once the match started as the Sabers exploded for an early 7-2 lead that forced Minot into a timeout. The quick break didn’t yield any change of play as Legacy continued to build its lead.

After fighting off set point twice, the Majettes finally broke. What looked to be a kill by senior outside hitter Caitlyn Messner was later taken back due to a net violation, giving the Sabers a 25-15 win.

“(That first set) is important,” Carlson said. “We’ve been needing to build our confidence, and winning that set gives you a belief that you can hang with the other team. Unfortunately we didn’t come out strong enough to get it this time.”

Legacy continued to impose its will on Minot in the second set, securing a quick 14-9 lead. But the Majettes responded thanks to the strong play of Messner. The 5-foot-10 senior recorded two key kills as her team clawed its way back in.

A timely ace by Theis ignited the crowd and the Minot bench as the Majettes cut the Saber’s lead to just one, forcing Legacy to call a timeout.

The mid-set rally only awakened the slumbering Sabers as Legacy came out of the timeout with even more intensity. The Sabers put together an 11-3 run to finish the set, giving them the 25-16 win.

Despite being on the verge of a sweep, the Majettes kept fighting in the third set. The group never stopped communicating, and every point scored sparked a celebration.

Minot kept pace in the early moments, but the Legacy attack never allowed the home team to take the lead. A swift kill from the Sabers in the closing moments finished things off, securing a 25-17 win and the match.

Messner, Sydney Beck and Allie Nelson each totaled five kills in the loss. Theis also had a productive night, finishing with two aces and nine digs.

Although the loss at home is a tough pill to swallow, Theis and company maintained a sense of pride after the match, knowing they never gave up.

“We definitely started to gel better as a team towards the end,” Theis said. “There are some areas that we still need to work on, but overall we didn’t give up. We still believe in each other, and we just have to keep playing one point at a time.”

It’s this grit that Carlson hopes to build on moving forward. That process continues as the Majettes shift their focus to Thursday’s road match against Bismarck High.

“It’s all about perseverance,” Carlson said. “We’re still trying to establish a winning attitude here at Minot High, and that takes time. I think I saw some progress tonight, though.”