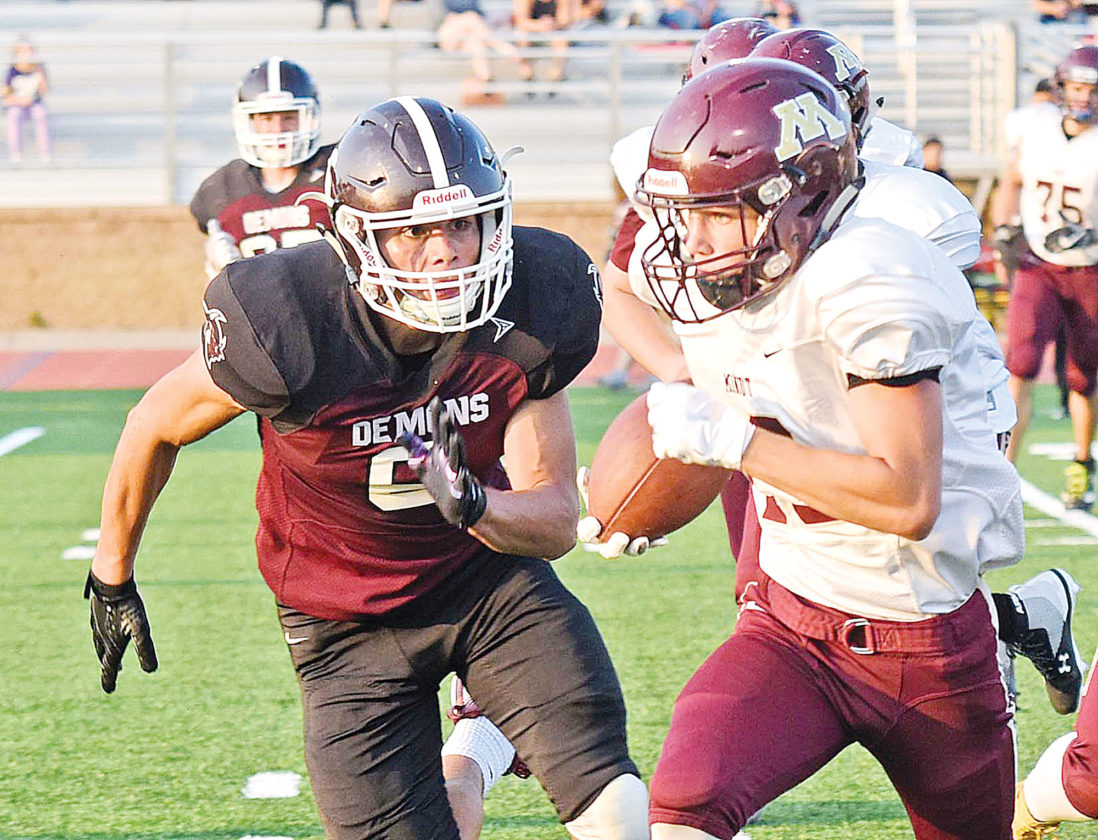 BISMARCK — Chalk up another big victory for the Bismarck Demons.

Will Madler threw for three touchdowns and ran for another, and the Demons rolled up more than 500 yards of total offense in winning their West Region opener.

“We had to establish some tempo, and I think we did that,” Demons coach Mark Gibson said. “Early on, we had to make some corrections to what they were doing defensively against us.

“I think once we did that, once our kids settled in, they were trying to guess what we were doing and they were guessing wrong sometimes. And when you do that, you’re going to cause some big plays. And as long as we’ve got No. 10 throwing the ball, good things are going to happen for us.”

Madler scored the first of four first-half touchdowns on a quarterback sneak for the Demons, and he threw a pair of scoring strikes – one to Matt Trolliey and one to Joe Jahner – late in the second quarter to give the Demons a 28-7 halftime lead.

“They had a lot of guys in the box and when you do that, you’re going to get some stops but eventually you might break one when you get a seam,” Gibson said. “It’s kind of what we’ve always preached. We’ve seen all kinds of different defenses and so once our kids kind of settled in, I thought our kids did a nice job.”

The Demons got on the board first late in the first quarter. BHS drove 58 yards in eight plays, capped by Madler’s 1-yard TD on a quarterback sneak with 29 seconds left in the first period. The key play on the drive was Izzy Olsen’s 41-yard run to the Minot 6.

After the Demons defense forced a three and out, Bismarck added to the lead. A seven-play, 66-yard drive capped by a 2-yard run by Olsen made it 14-0 with 7:34 remaining in the second quarter. Olsen had 23- and 15-yard runs on the drive, while Jared Hager added a 25-yard run.

After Nick Hinsz picked off a Jaxon Gunville pass to halt Minot’s next possession, the Demons struck quickly. Madler connected with Olsen on a 35-yard gain to start the drive and three plays later the senior quarterback hit Trolliey for a 33-yard scoring strike, making it 21-0 with 4:00 left in the half.

Minot got on the board with 1:45 left in the half as Mason Sys scored from 3 yards out to make it 21-7. Gunville picked up 19 yards on a quarterback scramble and connected on 13- and 22-yard passes to Sys and Jacob Schiele to set up the score.

The Minot momentum was short-lived. Thirty seconds later, Madler found Jahner wide open deep and delivered a 60-yard touchdown pass for a 28-7 Bismarck lead at the half.

The Demons’ defense bottled up the Magicians (1-2, 0-1 West Region) all night. Minot rushed 27 times for 77 yards and Gunville completed 10 of 24 passes for 105 yards and an interception. Minot finished with 181 yards total offense.

“We talked all week about coming out and establishing something defensively and I think we did that,” Gibson said.

Jared Hager capped the first possession of the second half with a 1-yard touchdown run for the Demons, and Madler hit Trolliey on a 63-yard scoring strike late in the third quarter to make it 42-7.

“In the second half we settled in,” Gibson said. “Our kids did a nice job of figuring out their fronts a little bit and once we figured that out, our kids executed well.”

The Demons continued to rotate players in and out of the lineup, which has been a big key early on.

“We’ve been healthy and rotating bodies in, trying to create some depth as we go and I think we’ve done little bit of that,” Gibson said. “We’ve got a long way to go and next week we’ve got another tough one going to Mandan.”

Bismarck travels to Mandan next week, while Minot hosts Williston.