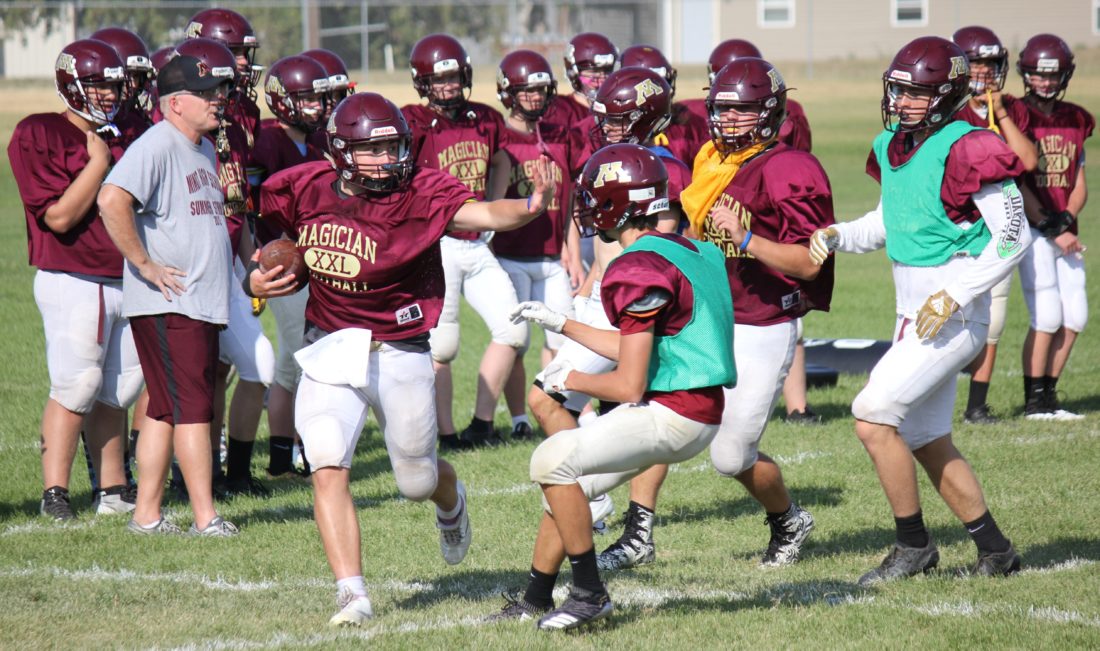 A majority of the familiar faces from a year ago on the Minot High School football team have moved on. The Magicians return one starter on offense and three starters on defense.

This is far from the same team that started last season 3-3 and went on a five-game winning streak to ultimately lose in the Class 11AAA state championship game to West Fargo.

The Magi open the new season tonight on the road against West Fargo.

“We are excited to get out on the field against a quality opponent and see where we are at right now this early point of the season,” MHS head coach Barry Holmen said. “Whatever happens, we will take that as our starting point and we will grow from there.”

Here is a breakdown of the 2018 Minot High football team.

Starting with the obvious, a new quarterback steps in for graduated two-year starter Creighton Rudolph. His primary backup last season, now-junior Jaxon Gunville, will be given the reigns to at least start the season. But, other options are available.

“We are going to start Jaxon Gunville, but we are very ready to put in a Cade (Tate) or a Triston (Emke) if we feel they will help us in certain situations,” Holmen said. “But, those kids are going to play some defense and receiver too. All three of them are going to be on the field. All three will start. We are blessed to have depth at the QB spot and we will use their talents in other spots as well.”

Senior wideout Kyler Stenberg, the only returning starter on offense, will get more repetitions at receiver and has enjoyed working with a new quarterback.

“It’s been fun, you got to get the tendencies down and the timing,” Stenberg said. “It hasn’t been too bad. I think we are getting pretty close to being on the same page and being at game speed. We will see how it goes Friday night.”

Other targets through the air are senior Jacob Schiele and junior Parker Jacobson, plus tight ends senior Sam Wedar and junior Derry Lentz.

“It’s obviously a learning process with a lot of new guys,” Schiele said. “We got to replace a lot of positions, so we will do our best.”

There will also be a new backfield in senior Mason Sys, senior Jacob Birch and junior Payton Philion.

“We have expectations for our kids, but we also have some realization that we are going to have some beginning bumps in the road when you replace an entire line,” Holmen said. “But, we got very capable young men that are committed to our weight room. Step one, can we run the ball? Can we operate up front as a unit? Can we pass protect? We will have brand new weapons on the field, but it all starts up front.”

High scoring games were common for the Magi last season. They allowed 288 points — the first time going over the 200-point plateau since 2010. Yet, the team posted two shutouts during the season for the first time since 2014.

None of those stats hold much importance considering the lack of returners.

“Returning we got one lineman, one linebacker and defensive back, so we have on at each spot,” Holmen said. “We are looking at them to be leaders for their position groups. A lot of question marks and new bodies on the field.”

A handful of players will be tasked with playing both ways. They will be challenged right away.

Piecing together the defense with the likes of Tate and Emke will take some time.

While the Magi do return kicker Stenberg, they will be using junior Minot High soccer player Noah Schmidt.

“We will share him with the soccer team,” Holmen said. “He is an excellent soccer player and he is a weapon we are excited about. Brand new. He will have to grow, learn and get up to the speed of the game. Kicking when guys are rushing you is different than in practice. But, a great talent.”