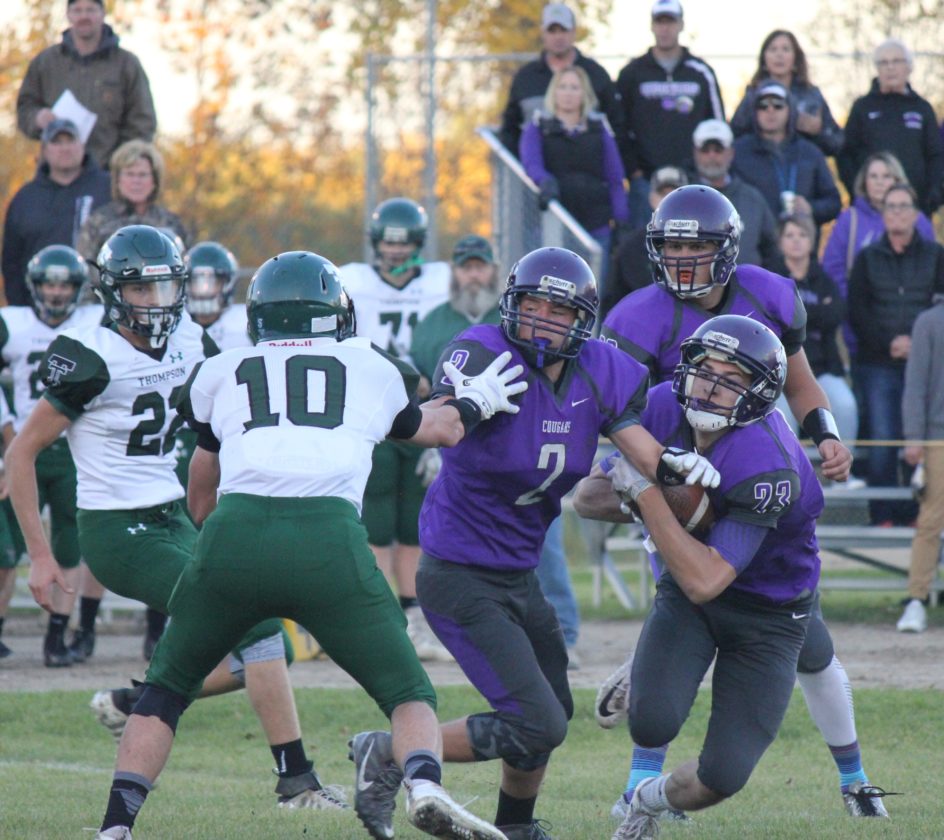 Alex Eisen/MDN North Prairie senior running back Gabe Leonard (23) gets tripped up in the backfield by teammate Xavier Mitchell (2) in a nine-man game played Friday against Thompson in Rolette.

ROLETTE – North Prairie had seen the play two years ago in the state championship game.

It worked then, and did so again Friday night in Rolette for No. 4-ranked Thompson.

“That play they ran to end the first half,” North Prairie coach Pat Wilkes said. “That’s the identical play that beat us in the state championship game two years ago, so that’s why they ran it.”

For a game that wasn’t originally on the schedule and was added because North Prairie (6-1, 5-0 Region 4) had an open week with Drake-Anamoose forfeiting the rest of its games, the two ranked teams didn’t hold anything back.

“It was a good game,” Thompson coach Brady Schwab said. “Instead of both teams sitting at home this week, we were both able to get a great game in. They are a great program. Win or lose, it’s fun to play these types of games. But, it’s nice to get a win on the road like this.”

An interception by North Prairie freshman Xavier Mitchell in the red zone stopped a lengthy Thompson drive in the first quarter and eventually led to a scoreless first 12 minutes.

A five-minute drive by the Tommies at the start of second quarter did finish with points.

Junior quarterback Cadyn Schwabe lofted the ball up to fellow junior Hughes, who beat one-on-one coverage with a streak route, for a 37-yard touchdown. The two-point pass attempt was incomplete to give Thompson a 6-0 lead with 6:38 left before halftime.

On Thompson’s next drive, a juggling catch made by senior Cole Sorby sparked another scoring drive, which ended with a 25-yard connection between Schwabe and Hughes again. The two-point pass attempt was completed this time, so the Tommies held a 14-0 lead with 42 seconds remaining in the first half.

“We had a couple of defensive breakdowns,” Wilkes said. “They knew we had a freshman defensive back and they picked on it. They went after our freshmen a little bit, but that’s the way it is. It’s just matchups.”

North Prairie senior quarterback Austin Soukup wasn’t content on being shutout in the first half. He returned the ensuing kickoff to Thompson’s 21-yard line. Then, with four seconds left, found junior receiver Grant Munro for a 10-yard touchdown. Soukup ran in the two points.

Instead of taking a knee and going into halftime with a six-point lead, the Tommies aired out the football with three seconds on the clock and the ball on their side of the field.

Schwabe hit his target on the post route and the ball was quickly pitched off to Hughes running the opposite direction. Hughes broke a couple of tackles and reached the end zone with the time expired.

Hughes’ third touchdown of the first half had Thompson up 20-8 at halftime.

“Well, I think everybody has got it in their playbook,” Schwab said about the play call. “It’s one of those plays you practice a lot and don’t get an opportunity to run. But, in this type of game, why not give it a shot?”

Wilkes added: “We had him corralled on the sidelines, I thought we had him. But, he slipped away.”

Thompson had a holding penalty on fourth down wiped out the fourth Schwabe to Hughes touchdown pass during their first drive of the third quarter.

North Prairie took advantage with back-to-back passes over 20 yards by Soukup to Leonard and then Mitchell to get the Cougars down to Thompson’s 25-yard line. An option run play to the right side sprung Leonard to the end zone from 15 yards out to get North Prairie within a score at 20-14 with 6:14 left in the third quarter.

Four minutes later, on fourth down and four, Schwabe found his favorite target once again for a touchdown. Hughes hauled in the seven-yard pass for his fourth touchdown, and the two-point attempt was good as well, to have Thompson double up North Prairie at 28-14.

The Cougars, however, stormed back again with two quick touchdowns on runs by Soukup at the start of the fourth quarter. A successful onside kick between the scores aided the rally.

With 10:14 remaining, North Prairie only trailed by two points at 28-26. But, a couple of turnover on downs by the Cougars later in the quarter foiled their comeback attempt.

The Tommies closed out the game with a touchdown run by Nicholas Reck and a one-handed grab by Hughes for his fifth touchdown of the game.

“He had a great night,” Schwab said about Hughes. “He is one of those unsung heroes for us that you don’t really hear a lot about. But, he had a big night for us tonight. It was fun to see.”

North Prairie ends the regular season at home against Larimore on Friday, while Thompson travels to face Wyndmere/Lidgerwood.