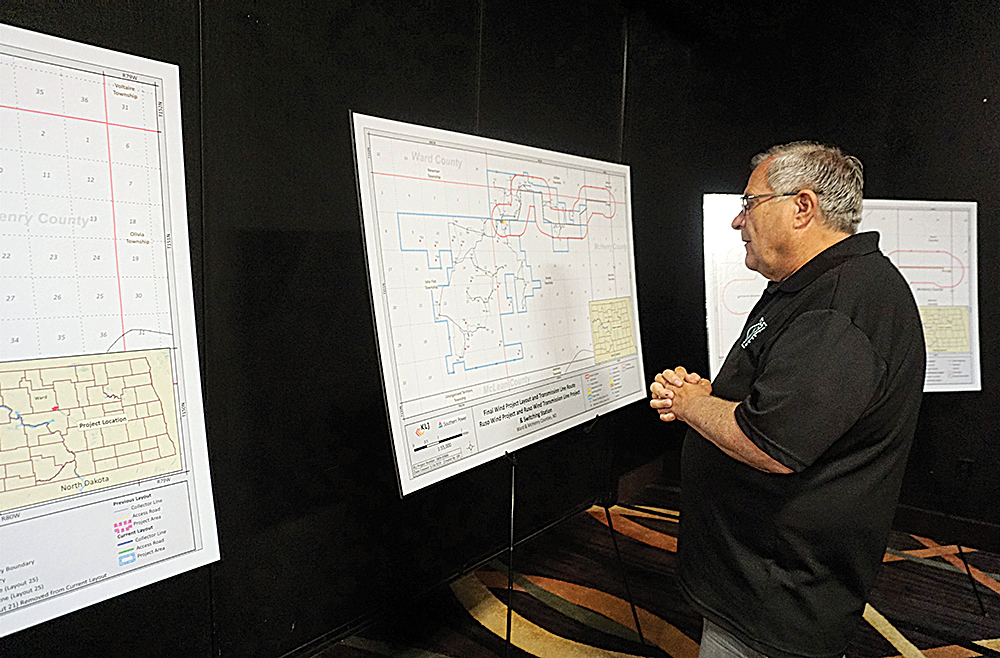 Jill Schramm/MDN Maynard Novlesky, who has land encompassed by the Ruso wind project, looks over maps of the project area at a North Dakota Public Service Commission meeting in Minot in June.

North Dakota’s oil and gas industry ended 2019 on a high note with new all-time high production numbers for both oil and natural gas.

Lynn Helms, director of the North Dakota Department of Mineral Resources, reported on Dec. 13 that for the first time in history the state had reached producing 1.5 million barrels of oil a day. It was a preliminary number but an outstanding one.

At the end of 2018, North Dakota had an average daily production of 1.404 million barrels of oil a day.

North Dakota has the honor of being the second largest oil-producing state next to Texas.

But that’s not all when it comes to all-time highs.

In October the state also reached an all-time high of producing 3.070 MCF a day of natural gas. An MCF is 1,000 cubic feet of gas. The month before the state produced 2.946 MCF a day.

As of Dec. 13, 53 rigs were actively drilling in North Dakota, according to Helms’ report. Of the 53 rigs, 17 were drilling on the Fort Berthold Reservation.

The reservation was producing 368,834 barrels of oil a day from 2,316 active wells. The total number of producing wells in North Dakota is 16,157 (preliminary number), according to Helms.

The reservation has the potential of 4,236 future wells.

Jobs in the oil country

There’s still plenty of jobs in oil country, and many of them pay well, according to Job Service North Dakota representatives.

The representatives, who spoke at the Western Dakota Energy Association meeting held in Minot Oct. 31, said, as of September data, there’s demand for workers in Divide, Williams and McKenzie counties, particularly in transportation-related jobs. Health care positions are also among high-demand positions in oil country and across North Dakota, Job Service officials said.

In northwest North Dakota, the average wage for open jobs posted with Job Service is $29.28 an hour, compared to the state average of $26.70, according to Job Service representatives. Average wage for online postings in the North Central Region (Burke, Mountrail, Renville, Ward, Bottineau, McHenry and Pierce) is $25.39 an hour, and 60% are $20 an hour or more.

High wages are offset by the high cost of living in some places in oil country. McKenzie County has the state’s highest cost of living followed by Dunn, Billings, Ward and Williams, according to Job Service.

In the neighborhood of around 47 wind projects are active in state as of July 17, 2019, information from the PSC.

In Minot and area those projects include:

A number of other projects across the state including in the Minot area are in various stages of plans.