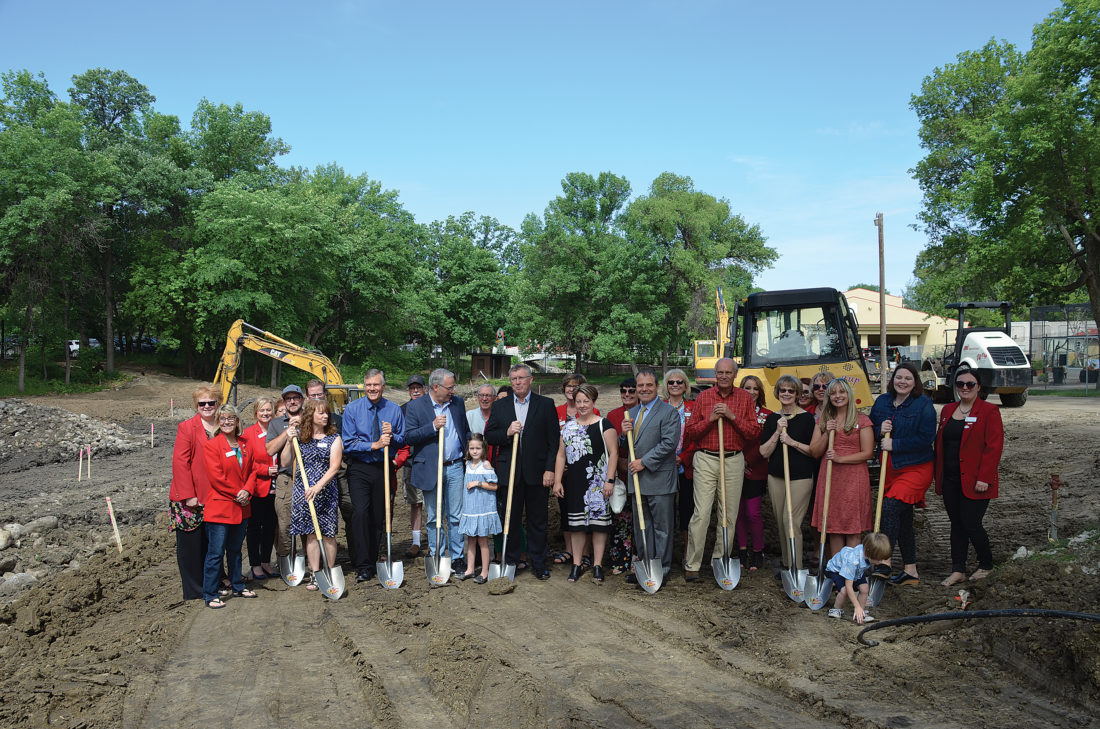 Eloise Ogden/MDN Numerous people representing Minot’s Roosevelt Park Zoo or with a special interest in the zoo broke ground in June for the new cat habitats at the zoo. The new cat habitats are part of the plans for the zoo’s centennial observance in 2021.

The long-awaited day arrived this year in June when ground was broken at Minot’s Roosevelt Park Zoo for new cat habitats. This year a proposed merger of the Minot Park District and City of Minot’s Recreation Commission also came together.

“We’ve been talking about it for quite some time,” said Becky Dewitz, zoo director, at the ground-breaking ceremony for the new cat habitats in June. “The zoo is the oldest zoo in North Dakota and these are dramatic changes to improve the quality of the zoo for our people.”

The project includes new habitat for Amur tigers near the Visitor’s Center and for new habitat for African lions on the east loop of the zoo where other African species located. The third phase of the project will be the renovation of the existing large cat habitat into a space that encourages climbing for the Amur leopards and snow leopards.

“There’s not many zoos that have exhibits like what we are doing,” Dewitz said, referring to overhead cat walks that will be part of the new areas.

As of December, the structures were up and enclosed in the habitats for the tigers and lions, said Jennifer Kleen, Minot Zoo Crew executive director. Rolac Contracting Inc. of Minot is the construction firm for the project.

She said the habitats for the tigers and lions is expected to be completed in the summer of 2019.

The third portion of the project, the habitat for the Amur leopards and snow leopards, is in the design phase.

Several months earlier the zoo launched a Centennial Capital Campaign for the project. Originally the goal was $5 million but later changed to $6 million due to higher projected costs.

People also can “Buy A Brick for the Tigers at the Zoo,” a project to help the zoo reach the financial goal of the capital campaign. The bricks will be placed on the guest pathway to wind among the tiger yards. As of mid-December, 312 bricks were sold. The bricks will continue to be sold, Kleen said.

The habitat for the leopards, a renovation of the existing cat habitats, would be in addition to the $6 million, Kleen said. She said no estimates of the cost are available yet.

The three-phase project is to be completed by the zoo’s centennial year in 2021.

A proposed merger of the Minot Park District and the City of Minot’s Recreation Commission also came together this year.

The city and park district hope to begin the transition Jan. 1.

“This isn’t about saving a lot of money but improving the quality and output of what we are getting for our dollar,” said Mayor Shaun Sipma at a public meeting on the merger held in December.

“We are hoping that with us combining our efforts together we are going to be able to provide more for our community and more quality,” said Parks Director Ron Merritt at the December public meeting. “We are excited about this opportunity to combine forces and try to do an even better job than we are doing right now.

The park board approved the merger. The city council likely will take it up in January.