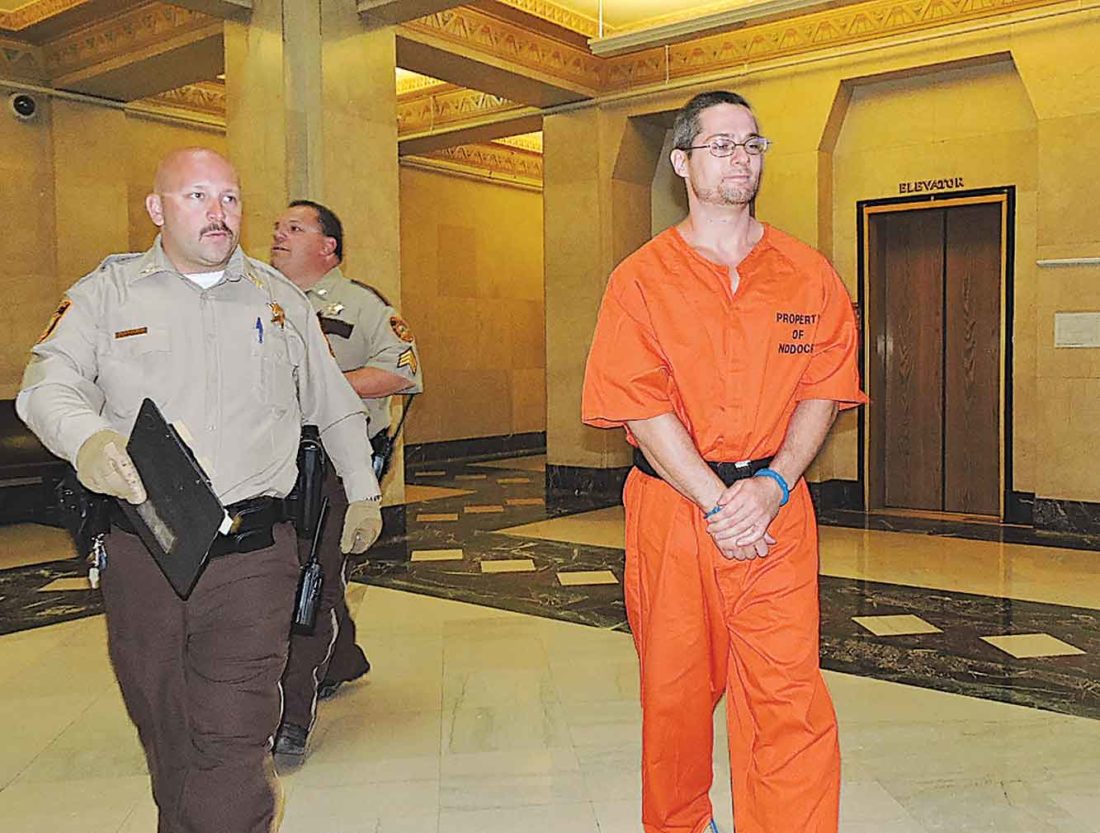 Convicted murderer Richie Wilder Jr. was sentenced for his failed escape from the Ward County Jail in August 2015. He also appeared at a hearing that will decide whether he will be able to have contact with his two children. Kim Fundingsland/MDN

The year 2017 was bookended by hearings for a husband and wife who plotted a murder and, in the process, effectively orphaned three children.

A jury found Richie Wilder Jr. guilty in December 2016 of the brutal stabbing murder of his ex-wife, Angila Wilder – the woman he had battered during their marriage and had continued to battle over custody of their two children. Angila Wilder, who was pregnant, was found dead on the floor of her bedroom at 519 16th Street NW on Nov. 13, 2015. The woman was stabbed or cut 44 times in the face, neck and upper chest with her 2-year-old son in another bedroom nearby. Some of the wounds were three or four inches deep.

Richie Wilder Jr. closed the bedroom door behind him, but left the toddler alone with his murdered mother for hours. The boy wasn’t found until his father arrived home hours later. Angila Wilder’s live-in boyfriend, Chris Jackson, called a cab when he wasn’t able to reach Angila Wilder on the phone and came home to find his door kicked in.

During the December trial, it emerged that Richie Wilder Jr. had tried to frame Angila Wilder’s current boyfriend for the murder. However, rock solid evidence proved that the other man had been at work at Walmart all night.

Judge Gary Lee sentenced Richie Wilder Jr. to life in prison without parole on May 3.

“This was a cold, calculated, cowardly act that resulted in the death of a sleeping victim who was murdered in her own bed,” said Lee, who also forbade Richie Wilder Jr. to have any contact with his two children by Angila Wilder. Richie Wilder Jr. appealed that decision and Lee reconsidered. Months later, Lee said he would allow the children to decide for themselves whether they want contact with Richie Wilder Jr. once they reach adulthood.

Weeks after the sentencing, there was another twist in the case.

Richie Wilder Jr.’s current wife, Cynthia Wilder, was arrested after she told an old flame that she had helped Richie Wilder Jr. plan the murder and helped him clean up afterwards.

Cynthia Wilder, who taught kindergarten for the Minot Public Schools, admitted that she waited outside Angila Wilder’s house on certain nights to find out just when Jackson left for work.

On the night of the murder, she watched her husband leave in her Honda Pilot and knew what would happen. Her two stepchildren, a girl and a boy, were staying with her in the apartment that night along with her own toddler daughter.

Richie Wilder returned home after the murder, took a shower and Cynthia Wilder helped him clean up blood evidence in the car. Richie Wilder Jr. told his wife that “Angila had fought (and) that it got sloppy.” After they cleaned up, Richie Wilder Jr. and Cynthia Wilder had sexual relations. She went to sleep and he left to dispose of the bloody clothing and murder weapon. He put the incriminating items in a bag weighted down by a cinder block and tossed it into the river.

Richie Wilder Jr. and Cynthia Wilder discussed how to get their stories straight for the authorities. Cynthia Wilder told her old friend that she stuck to the story they agreed to, but her husband didn’t.

After Richie Wilder Jr. was arrested, Cynthia made contact with an old flame on Facebook, hoping to resume her romantic relationship with him. She made statements that alarmed him and he agreed to record his conversations with her in May. Cynthia Wilder was arrested in May and has been held in the jail ever since. In November, she changed her plea to guilty of conspiracy to commit murder. She faces a sentence of up to life without parole when she is sentenced in March.

For a time Cynthia Wilder had temporary guardianship of her two stepchildren, a girl who was 12 and a boy who was 6 at the time of their father’s sentencing hearing in May. The children are now living with their maternal grandmother out of state. The grandmother has been appointed their guardian. Cynthia and Richie Wilder’s 4-year-old daughter was living with her paternal grandfather out of state as of this summer.

Richie Wilder Jr. is appealing his conviction to the North Dakota Supreme Court and wants a new trial. According to media reports, he has been transferred to a prison in California.

Cynthia Wilder is still being held at the Ward County Jail, awaiting her sentencing.