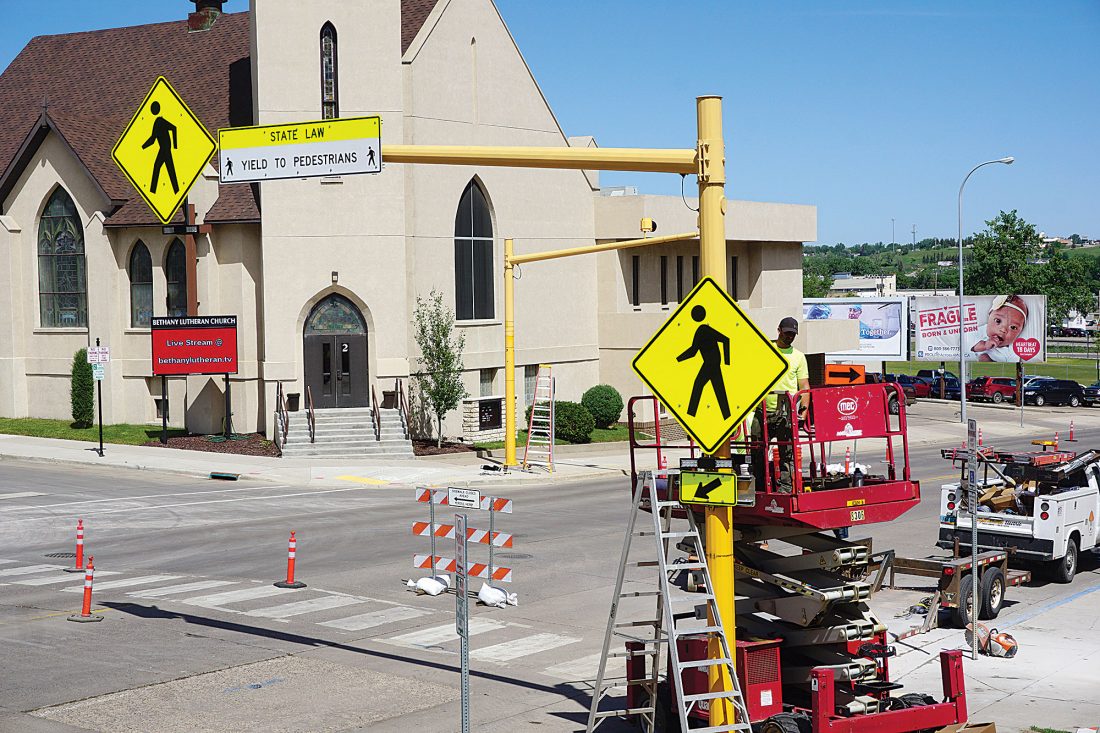 Jill Schramm/MDN Signage reminds motorists of pedestrian right of way Tuesday at a crosswalk across Third Street in front of the Ward County Courthouse and administration building, where workers have begun constructing improvements to increase safety. The crosswalk connects the county buildings with staff and visitor parking.

Ward County will re-open its administrative building to the public June 11.

The county commission voted to open shortly after the completion of the election rather than wait until June 15 as recommended by its COVID-19 task force.

The City of Minot plans to re-open its office buildings on June 15.

A recent mass testing event that included members of the Sheriff’s Office and jail, as well as jail inmates and other area law enforcement and firefighters, all came back negative, Ward County Emergency Manager Jennifer Wiechmann said.

“Out of 434 tests throughout the entire mass testing event, not just Ward County,” Wiechmann said, “they were all negative. So, great news from that event.”

A previous testing had found two jail workers who tested positive. A mass testing for the public will be held at the North Dakota State Fairgrounds today.

Commissioner John Pietsch asked about the potential for offering antibody, or serology, testing. Wiechmann responded that is not being looked at because of the low reliability of the tests.

Human Resources Director Tammy Terras reported the county’s COVID-19 task force is confident in the county being able to safely re-open. The opening date was recommended as June 15 because of the desire to keep the building closed until after the election.

The Auditor/Treasurer’s Office will begin counting ballots the evening of June 9 but mailed ballots postmarked by June 8 will continue to be accepted until the canvassing board meets June 15 to count approve counting of those ballots and certify election results.

Auditor Devra Smestad said the office has received 14,506 applications for ballots, and another 268 applications arrived Tuesday.

Through Monday, 5,951 voted ballots have come back, or just over a third of ballots sent. The office will begin processing ballots today in preparation for tabulating results next Tuesday.

In addition to dealing with the election, the office began working last week with taxpayers on 987 initiated foreclosure proceedings, Smestad said. That number since has been reduced to 862.

“So we’re inundated, and I can only say thank you to the departments that have been over there consistently helping, whether it’s to match up ballots or file applications or whatever. It’s been kind of like an all hands on deck,” she said.

She said keeping the office building closed to the public to avoid counter traffic at this time would be helpful.

Commission Chairman John Fjeldahl said the county can’t keep the doors locked just because staff are too busy to assist them.

“We just want enough time so that we don’t have those transmissible moments,” Wiechmann said. “If we don’t do our due diligence, the repercussions could be great.”

Commissioner Shelly Weppler said if a member of the public positive for COVID-19 comes in and infects staff, that will increase the difficulties for the office and could interrupt the voting process.

“Will we ever get to the point when we say there’s no danger? We will never get to that point,” Commissioner Alan Walter said. “In my mind, we prolonged this thing way too long.”

Commissioner John Pietsch said he doesn’t see a danger that would require continued closure after June 9.

“We can’t be in hiding behind these doors forever. That isn’t the way we want to operate this place,” he said.

“I don’t feel that Ward County has ever been hiding behind the doors. I feel that the decisions that have been made, in the majority, at these meetings were made in recognition of information that was being given to us at the time,” Weppler said, adding that the public still has been able to conduct business with the county during this time.

“It is a big difference when you can’t actually come into a building,” Pietsch said. “It would be nice to be able to do that again. If we’re going to wait till there is no such thing as a risk, I don’t think the doors will be open until they have a vaccine. I don’t know if we don’t wait that long.”

The commission defeated a motion to open June 15 on a 1-3 vote, with Weppler voting for that date. A motion to re-open June 11 passed 4-0.

The commission also voted to submit COVID-19-related expenses incurred through May due to the pandemic for federal reimbursement.

Expenses totalling about $61,000 included computers for employees working at home, COVID-19 signage and protective measures and election supplies that exceeded normal. The list includes some expenses of the Sheriff’s Office, but the office also is receiving additional grant funds through the U.S. Justice Department.

The expenses include election-related overtime in the Auditor/Treasurer’s Office from May 10-31. Overtime incurred before that was minimal and is being handled by offering compensation time later, Terras said.

The office incurred 156.25 hours of overtime, amounting to $6,493 in overtime wages. The commission voted to approve the use of overtime rather than compensation time for the May period and include exempt employees who would not normally incur overtime.

Ward County has selected a new auditor/treasurer and Veteran’s Services Office director while preparing to say farewell to two other department heads.

Marisa Haman, who has been deputy auditor/treasurer in the Ward County office, will be working with retiring Auditor/Treasurer Devra Smestad throughout the summer in transitioning to the position. Haman has been with the Auditor/Treasurer’s Office since Sept. 4, 2012.

Bradley Starnes will start June 15 as director in the Veterans Service Office.

Starnes is currently employed with the Minot Vet Center as office manager since 2016 and is working toward a finance degree from Minot State University. He served in the Air Force as Senior Airman from 2005 to 2008, providing security for government resources vital to national security. 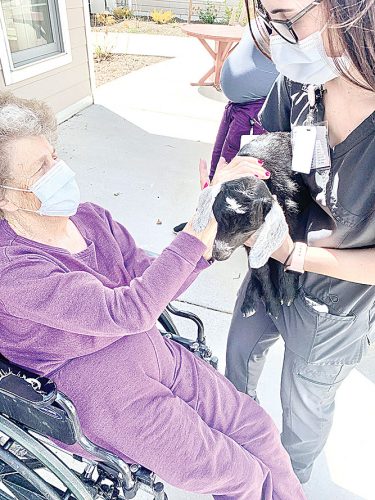