Police issue “I Got Caught” tickets 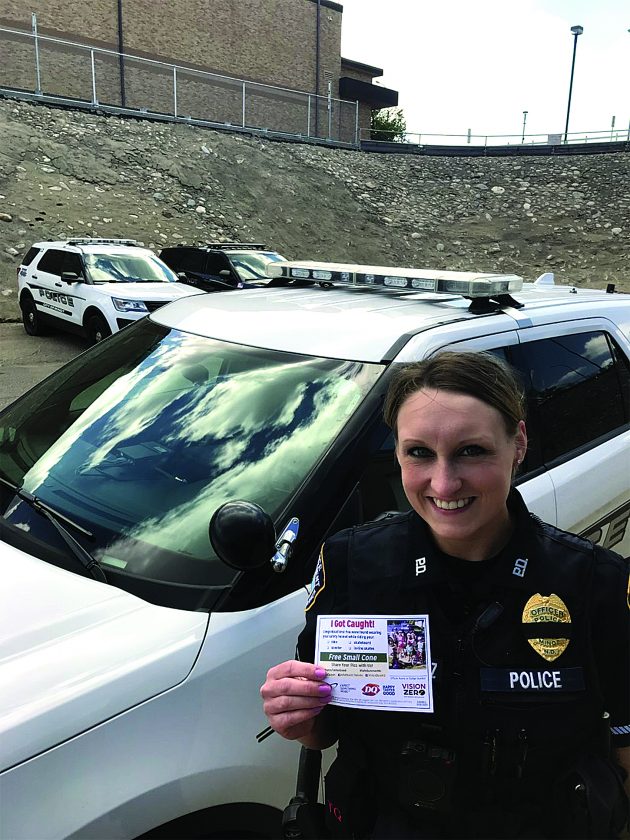 Submitted Photo Officer Kayla Kudronowicsz, Minot Police, holds an “I Got Caught” ice cream cone citation that is being given out to children wearing a helmet while on bicycles, skateboards or in-line skates.

Wear your helmet and get rewarded with ice cream. It could happen.

Minot Police are once again participating in the “I Got Caught” campaign sponsored by the American Automobile Association. For the next several weeks police will be seeking youngsters wearing helmets while they are bicycling, skateboarding or in-line skating.

If a youth is “caught” promoting safety by wearing a helmet they will receive an “I Got Caught” citation from a police officer. The citation is redeemable for a free small Dairy Queen cone.

“The campaign does two things,” said Master Police Officer Aaron Moss, Community Outreach Unit. “First it promotes safety among children on any wheeled device and, second, it promotes a positive exchange between law enforcement and younger members of the community.”

Statistics provided by the Centers for Disease Control show that wearing helmets reduces overall head injuries about 60 percent and fatalities by about 73 percent. Participants in this year’s “I Got Caught” campaign includes the North Dakota Sheriffs and Deputies Association, North Dakota Chiefs of Police Association, Vision Zero and Safe Kids coalitions in Minot, Bismarck, Grand Forks and Fargo.

About 12,000 ice cream cone citations are expected to be distributed in the state this summer. Since the campaign’s introduction in 2013 more than 80,000 “I Got Caught” citations have been issued.

“The reaction from the kids has been pretty consistent and this year is no different,” said Moss. “Sometimes kids are confused, but when officers explain the campaign they light right up and want to share stories. They get encouraged to tell their friends. It’s a fun time with a police officer that results in a free ice cream cone.”