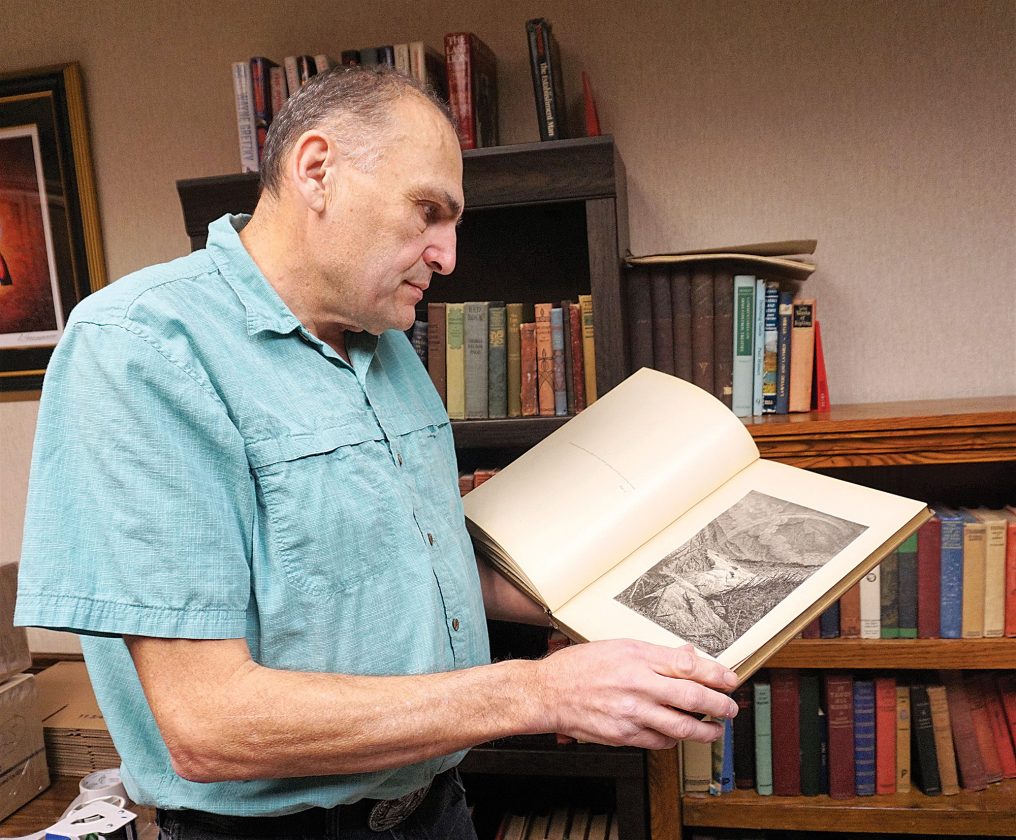 Jill Schramm/MDN Frank Godon examines the artwork in a collectible book from the late 1800s in his Bottineau office Feb. 12.

BOTTINEAU – When Frank Godon’s daughter asked him to write her a business plan for a rare and collectible book business, he didn’t anticipate that he would be the one launching the enterprise.

His daughter’s sudden death from heart failure in November 2018 was followed by the death of his father in January 2019.

“When I was going through my father’s stuff, I found a box of things that I had just thrown in and here was that business plan I had done for her back in March of 2018, and I thought, what a better way to keep remembering her than to carry on with what she wanted to do, because it was my desire, too. I enjoy books. I don’t like to see books thrown in the garbage. I’ve picked out books from the garbage,” Godon said.

Some of his garbage and recycling bin finds have been old, artistic volumes that proved valuable in the collector’s market. He began conversing with a rare book specialist with the History Channel’s “Pawn Stars” to gain an understanding of collectible books as he finalized his father’s property.

“I thought, well, it’ll be a hobby – just kind of keep me out of trouble and make some money for me until I get that estate settled. Well, it’s almost a year now,” he said.

He discovered in selling online there was a hefty charge to get books across the U.S.-Canadian border. He decided to open a small office in downtown Bottineau last November to serve as shipping center. His books can be found at ebay.com/str/ravenwolfeverything books. Information also is available on Facebook at RavenWolf Antique & Collectable Books.

The value of an old book might only be $20 but rare editions in pristine condition can be worth hundreds if not thousands of dollars. Godon markets the books he picks up at thrift stores or rescues from the trash on eBay or sends them to an auction house.

He particularly looks for specific authors and dates. First editions of collectible books have the most worth.

One of the more interesting books he’s come across was written by Frederick Engels, a German communist, philosopher and social scientist. Research showed it might be worth $50, so he told the owner he was willing to buy it from him to complete his own set of books by Marx, Stalin and Lenin.

But he didn’t quite feel comfortable with his assessment of the book so inquired of “Pawn Stars.” It turned out the book was a first American edition. Another first American edition of the book in pristine condition had sold for $28,000 so the advice was to sell if he could get between $5,000 and $8,000. He ended up getting $6,500, which after costs went to the book’s owner, who gave him $1,000 in return.

Occasionally, Godon will advertise that he’s taking books. Typically, people simply donate books when they are downsizing, but Godon also has paid for books that appear to have some value or has suggested people get an appraisal if they have a book that appears valuable.

He said he is careful not to over-extend himself with too many books. When he has more books than he needs, he will donate some to the book sale project supporting Bottineau’s family crisis center program.

“To me, it’s important that books are read, and someone’s going to get them, take them, use them,” he said.

Godon recently gave a public presentation in Bottineau on rare books and how to restore old books. Education and public speaking have been part of his varied life.

He twice ran for federal Parliament in Canada – as a Libertarian in 2013 and with the conservative People’s Party of Canada in last year’s election. In 2016, he ran on the Manitoba Party ticket for a provincial legislative seat. As a candidate, he’s also had opportunity to meet Prime Minister Justin Trudeau and develop connections with politicians within Manitoba.

A dual citizen of the United States and Canada, Godon served in the U.S. Marines. He studied business administration at Minot State University and computer science at Dakota College in Bottineau, eventually finishing his intercultural studies degree at the University of Saskatoon in Saskatchewan.

He and his now ex-wife started a restaurant in Killarney, Manitoba. When that venture ended, he traveled to Russia to teach English as a second language at Baltic State Technical University in St. Petersburg in 2004.

He did work with the Canadian Consulate there and was introduced to the Canadian Studies Department of Philology faculty at the state university in St. Petersburg. He taught Canadian aboriginal culture and history at the university, along with some English classes.

Funding for the program was lost when the government shut down the consulate. Godon returned to Canada, but a couple of months later, he was contacted by the state university in St. Petersburg about preparing a course for cross-cultural communication in journalism. The journalism department director liked his proposal and invited him to come teach it.

He taught journalism and public relations there until 2013, when he returned to Boissevain to care for his elderly parents. His Russian wife, who is an artist, and two young daughters followed soon after. He also has two adult daughters from his first marriage.

While caring for his parents until their deaths, Godon continued teaching for the Russian university remotely through Skype until the program began to fade in 2019.

“I only had three students the last semester and they actually weren’t even Russians. They were Chinese students,” he said. “We have students from all over the world – Canada, United States. I’ve had students from Sweden, France, Italy, Austria, Finland – of course, because it’s right next door – Norway, Denmark, Netherlands, China, South Korea, Kazakhstan, Uzbekistan. They would come to learn journalism, and it also gives them a chance to practice their English, and it gives them a chance to understand how to relay news cross-culturally.”

He said he would love to return to work in Russia someday. Along with teaching there previously, he’s spoken at symposiums in St. Petersburg and Moscow on cross-cultural communication, Native American treaties and on the Metis people. The Metis presentation drew about 400 people, including high-ranking government officials.

“During the Stalin years, he basically tried to breed the Native out of the people in the north, and they forced marriage between white and Native people up there. So it developed this generation of mixed blood that are not welcomed or not accepted in the white Russian community or accepted in the Native community,” he said. “My talk on the Metis people in Canada, the mixed bloods, intrigued them.”

Godon is a registered member of the Turtle Mountain Band of Chippewa. Raven Wolf, for which his business is named, comes from the name given to him by a Russian Shaman. His Anishinaabe grandfather was a medicine man in the late 1800s and through him, his family is connected to the Wolf, while Godon was born under the sign of the Raven.

His grandmother was from the Turtle Mountain tribe while his grandfather was a Metis from Canada. Godon’s father was born at Dunseith before the family moved to Manitoba in the late 1920s.

Godon’s father was a D-Day veteran, one of the first on the beach with Canadian forces during World War II. He later became a prisoner of war. Godon went to France with his father in 2003 for the opening of the Juno Beach museum center. They returned in 2009 for the opening of a pavilion honoring the role of the Metis people.

“We took a Red River cart, a sash. It was very emotional for my father. It is for me, too,” Godon said.

During his last trip, Godon’s father opened up for the first time about his experiences in the military. Godon now is writing a book about his father.

In his will, his father requested his uniform and medals be donated to the Juno Beach center. Godon and his cousin delivered the items at a ceremony on the 75th anniversary of the D-Day landing last year.

With family losses still weighing heavily on him, Godon finds solace in the beauty and longevity of old and rare books.

“This is my therapy,” he said. “You always see something interesting.”