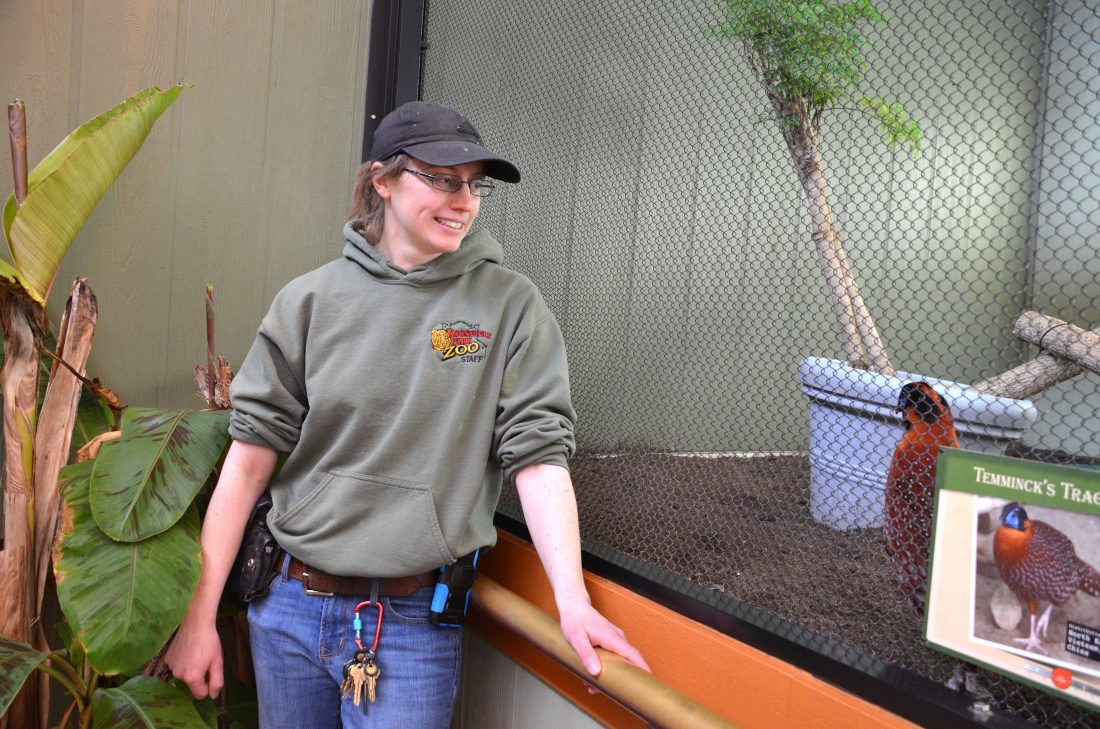 Eloise Ogden/MDN Lana Erickson, aviary zookeeper at Minot’s Roosevelt Park Zoo, is shown on Wednesday by the Temminick’s tragopan exhibit in the aviary.

Lana Erickson knows the birds in the aviary at Roosevelt Park Zoo in Minot.

She’s the aviary zookeeper plus the keeper for the African black-footed penguins and Southern ground hornbills located on the east loop of the zoo where other African species are located.

When a job opportunity opened up again at the zoo, she returned there, starting off during the winter as a helper in various areas and ending up as the keeper on what is now the North Trail of the zoo.

“Then the flood happened and as we were getting rebuilt, some keepers found jobs elsewhere so a full-time position opened up for the avian department,” said Erickson. She applied and got the job in August 2012.

Taking care of the birds “grew on me,” Erickson said. “My first summers we definitely didn’t have the collection we have now. I was right out of high school so I was kind of like ‘Oh, I want to work at a zoo with animals and see if that was something I liked.’ I was going into zoology and wanted to work at a zoo.”

“We had the penguins and we had a few others but it wasn’t a huge collection. I finished college and came back and when I started working on the north side of the zoo my supervisor at the time was doing some training work with some of the raptors (birds of prey). Just helping her with that and seeing their personalities I guess they started to grow on me,” Erickson said.

When the full-time position opened up in the bird department, Erickson had the experience.

“I felt comfortable going for it and thought I could do a good job. I got it and then once we redid this building (aviary), we got all these new birds in. Just doing the research and learning the personalities of all the birds, they definitely grew on me a lot more,” she said.

“It’s a nice warm area,” said Erickson, sitting on a bench by plants and near the bird exhibits inside the aviary after coming in from the 7 degree temperature outdoors on Wednesday.

“It’s a nice stopping point and a nice place,” Erickson said. She said she’s seen some people sit in the aviary and read books there in the winter. The zoo is open in the winter weather permitting.

“For the most part it’s fairly quiet (in the aviary). Sometimes they (the birds) get active but not super. You get chirps here and there and sometimes one will do something loud but not too bad usually,” she said.

She said the penguins are fish eaters. She said they are African penguins so they are a more temperate species and temperatures of 40-80 degrees are their ideals.

The penguins are kept indoors in a building with heat and air conditioning plus a pool in the winter months and other times when the outdoor temperature is not ideal for them.

She said the Southern ground hornbills are larger than the birds in the aviary. “They’re the ones that like to come up when people are around and show off their stuff,” she said. When outdoors, they’re habitat is located near the penguins area.

As the zookeeper for the these birds, Erickson feeds and cleans up after them. She said she provides the daily maintenance of fresh water, new food, fresh food dishes, monitors the quality of their exhibit and whether any maintenance needs to be done and monitors their health.

For any that may be breeding, she also monitors their breeding behavior. “We’ve just started getting into doing breeding with some of them,” she said.

Other zookeepers take care of the cranes in the African exhibits area and the native eagles and owls on the north side of the zoo.

The zoo has five full-time zookeepers including Erickson, six part-time zookeepers plus seasonal assistant zookeepers. “Occasionally, we have some interns as well,” she said. The zoo advertises on the Association of Zoos & Aquariums website for interns and has had interns here from all over the U.S.

She said many people she’s talked to like the aviary and think it’s a great place. “I like to think so,” she added.