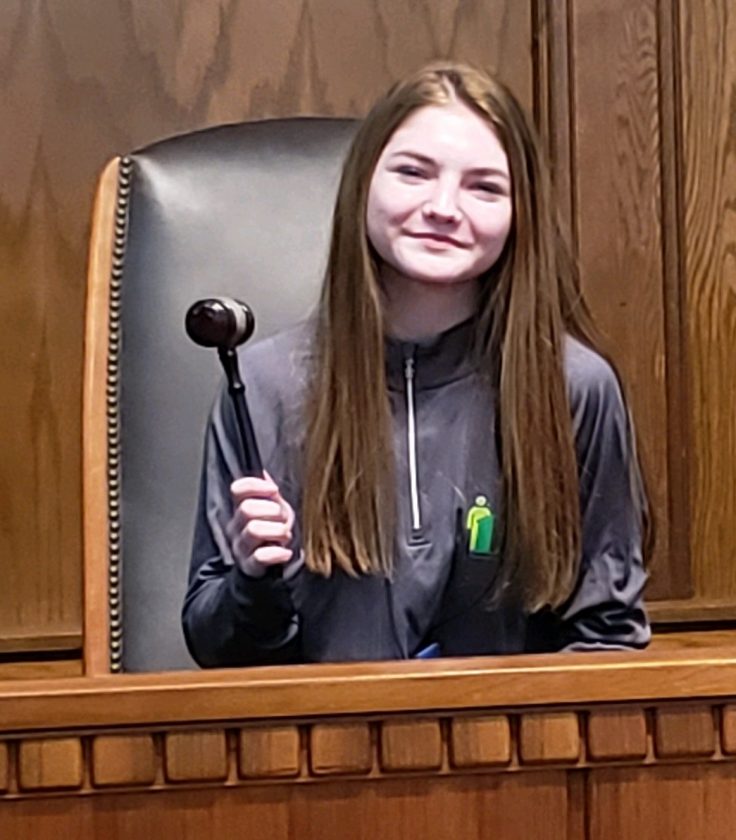 LAW was created for North Dakota 4-H youth grades 7 through 12 who are interested in civic engagement and the political process. LAW helps youth become proficient in parliamentary procedure and develop into engaging citizens that understand and participate in our government.

On the first day, the youth learned about Parliamentary Procedure and worked together in groups. Following a Parli Pro Jeopardy game, the youth attended a UND hockey watch party while making blankets donated to the Community Violence Intervention Center (CVIC) in Grand Forks.

During the second day, the youth competed in a “Parli Play” contest. Each youth was assigned an executive role and conducted a meeting. The youth were scored on how effective they were in making motions, speaking out loud, and discussion during the meeting. During Parli Play, the teams were judged by both a panel of judges and the teams scored each other. Engelhard’s team won the Parli Play contest and Engelhard was voted ‘President of the Day’ by her peers.

Three learning sessions followed the Parli Play contest. In the first session attorneys Brittany Blake and Haley Wamstad shared their experience as UND School of Law students, how they began their careers, and the youth interviewed Blake and Wamstad. During the second session UND School of Law Assistant Professor of Law Ariana Meyers taught the youth about courtroom etiquette. The third session was held in Baker Courtroom where the youth interviewed North Dakota District Judges Don Hager and Daniel Narum.

Next in teams, the youth participated in Argument Wars where each team was given a United States Supreme Court case. The teams represented one or the other side of the case, presented their case and their own closing statement to a judge. This full day ended by a choice between swimming at the CanadInn water park or a guided Ralph Engelstad Arena tour.

On the last day of LAW, the youth were able to present a case in a mock trial. This allowed them to utilize everything they had learned throughout the weekend.

Overall, the youth were able to learn about parliamentary procedure and the judicial system, make friends from all over the state, and tour the UND School of Law.