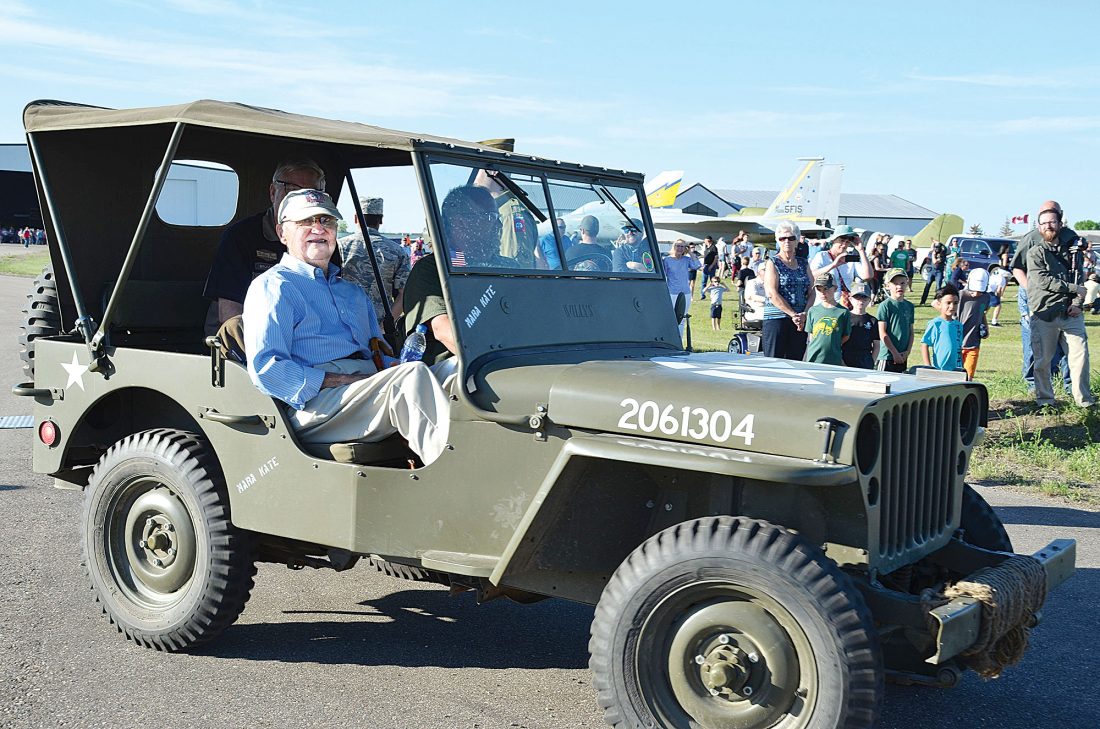 Eloise Ogden/MDN Lynn Aas, a World War II veteran, is shown riding in a Jeep during an event held at the Dakota Territory Air Museum, Minot, this past June 6 to commemorate the 75th anniversary of D-Day.

World War II veteran Lynn Aas of Minot is among those featured in a recently released book about the war’s largest airborne invasion and the final push into Nazi Germany.

“Four Hours of Fury” was written by James M. Fenelon and released in 2019.

It is one of two books released this past year in which Aas is among those featured. The other book, “North Dakotans Never Give Up,” by North Dakota native Larry Aasen, is about North Dakotans whose determination made them successful in many fields.

Aas and Aasen both attended UND at the same time and both went into the Army on March 23, 1943, leaving Grand Forks together. They were in different military units during World War II.

Now 98, Aas fought as a U.S. Army rifleman in the historic Battle of the Bulge, serving with the 17th Airborne Division of the 193rd Airborne Infantry in the European Theatre. He received both the Bronze Star and the Purple Heart.

“The whole book is well written,” said Aas about “Four Hours of Fury.”

“It’s strictly about my division and all the combat we were in starting at Bastone.” Bastone is a town in southeastern Belgium.

He said approximately the first hundred pages of the book are about the combat from Bastone to the German border. He said part two of the book is a detailed description of the crossing of the Rhine River by the gliders and paratroopers.

The book follows Aas’ unit, the 17th Airborne Division, in the Battle of the Bulge and preparing for Operation Varsity, the largest airborne operation in history to be conducted on a single day and in one location – March 24, 1945, in Wesel, Germany.

After the war Aas returned to North Dakota, earned a law degree from the University of North Dakota and served in the North Dakota Legislature for four sessions. In March 2015, he was the official representative of the 17th Airborne Division at the 70th annual reenactment of the Battle of the Bulge in Bastogne, Belgium. In October 2017, he was presented with the French Legion of Honor medal, France’s highest honor awarded by the president of France.

Fenelon, the book’s author, served in the military for more than a decade and graduated from the U.S. Army’s Airborne, Jumpmaster and Pathfinder schools. He and his wife live in Texas. “Four Hours of Fury,” is his first book.