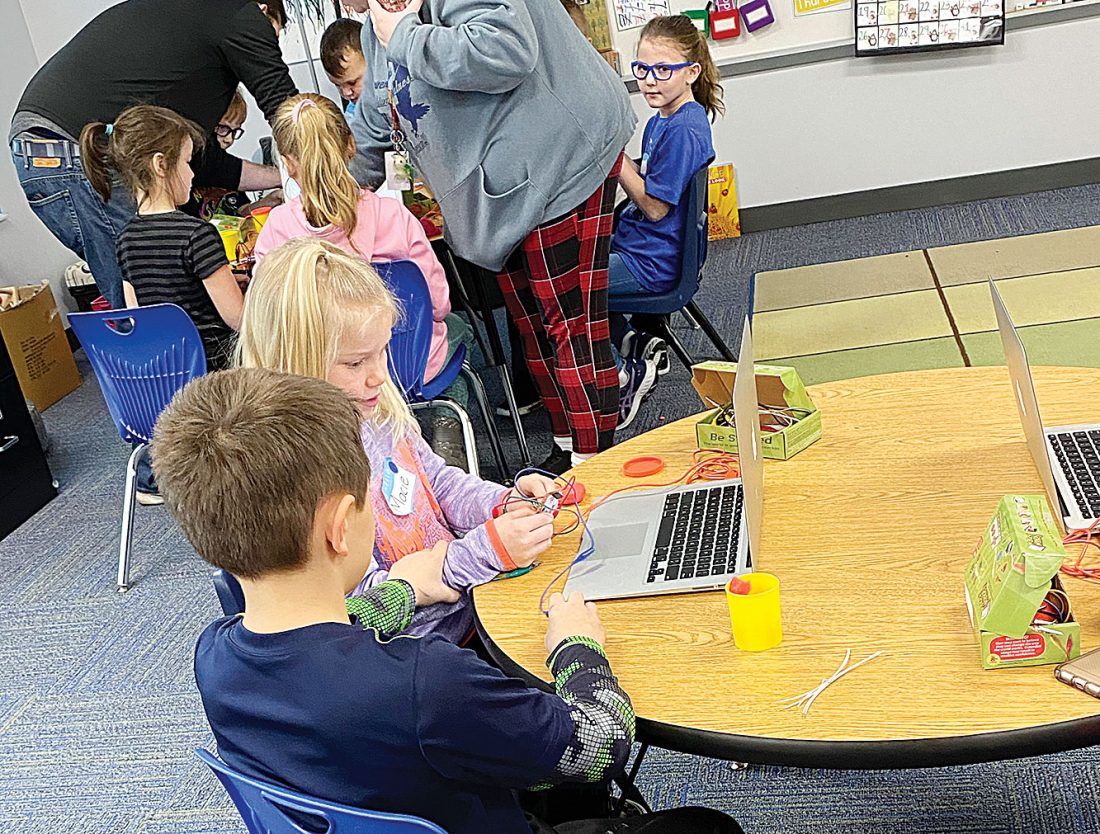 The first graders of John Hoeven Elementary School in Minot had fun experimenting with four different types of technology on Friday morning.

In each of the first-grade rooms, technology facilitators with Minot Public Schools helped the students use an Osmo Masterpiece program on iPads, a blue Dash robot, Oculus virtual reality goggles and a Makey Makey music program on Apple laptops.

Heather Ell’s class sat at their tables and used dry erase boards and markers tracing what they saw on the Osmo Masterpiece program. While they drew on the boards, they had to look at the iPad screen to trace the puppy, cherries or dinosaur they were working on. Once they were finished, they took a picture of the board on the iPad to save for later.

Kelly Heilman’s class had a difficult time containing their excitement to see lions, penguins and a wing walker on the Oculus virtual reality goggles. As Thomas Scheeler, one of the technology facilitators, told them about what they would be seeing, he explained that they would have to get with their buddy to make sure everyone stayed safe. With VR goggles, it’s easy to want to get up or reach to pet the lion in front of them. But if the students weren’t careful, they could accidentally hit someone or run into a wall. That’s where the buddies would come in, preventing the one wearing the goggles from hurting themselves or others. One girl was so worried about her partner that she held onto her for a good portion of the time she wore the goggles.

‘Teachers commented about how the Oculus goggles would be very useful for students who are doing projects or papers about places across the world, like Paris or Japan. They could walk to streets and see the buildings close up and maintain accuracy when describing the area. 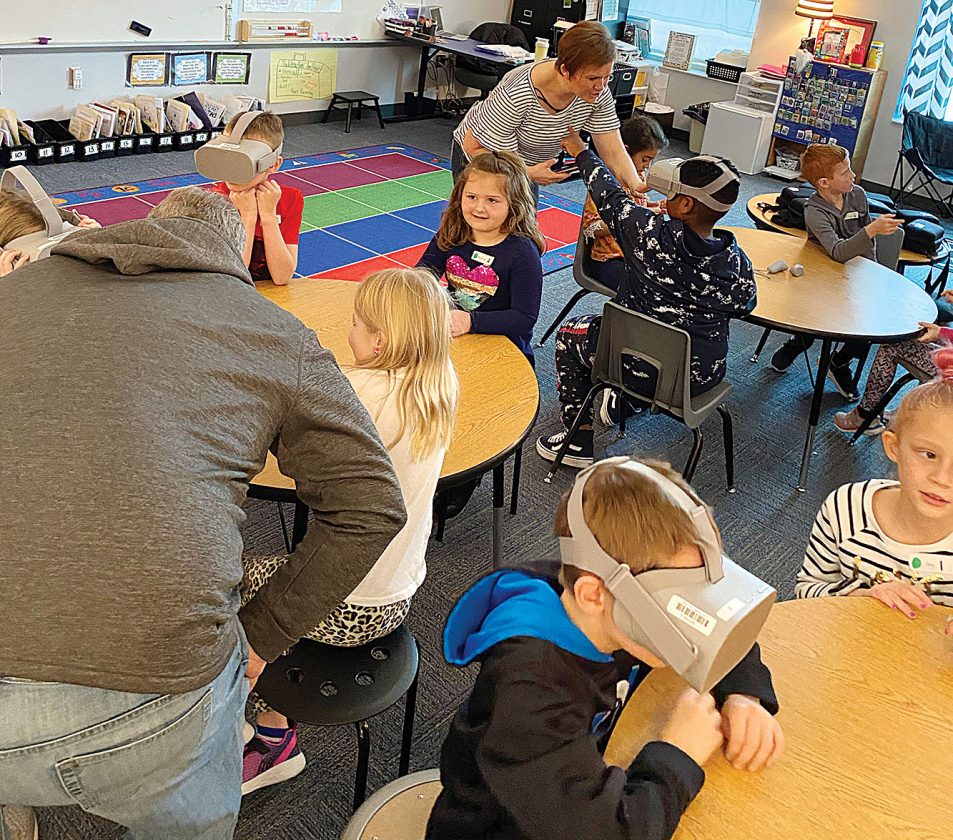 Across the hall, students played with Dash the robot. Karin Haas, one of the tech coaches, said Dash “helps the kids learn about coding, problem solving and thinking skills. He can also record the students’ voices and they can use the control tablet to carry their message to a different room. Dot is another robot the technology department has been experimenting with. Dot can correspond with Dash, but they haven’t played aorund with him enough to figure out exactly how he works.

The final thing the first graders did was use Play-Doh to make music on an Apple computer using the program Makey Makey. Two kids sat at each computer. A small circuit board-looking device was plugged into the laptops with a green wire and a red wire attached. To make the project work, the students had to hold the metal part of the green wire in their hand at all times. When they touched the metal clips on both wires, the computer made a piano sound.

They were then told to have one partner hold the green wire and the other hold the red wire and give each other a high-five. Upon contact, the computer made a noise as the circuit was completed.

In the middle of the session, one wise first grader asked if they would get electrocuted by touching the wires. The facilitator leading the session soothed everyone’s worries, saying they would not be electrocuted, acknowledging that it was a very smart question.

The next step was making a ball out of Play-Doh, which had to be pressed down a little bit so it didn’t roll off the table. The blue and white wires that were connected to the circuit board also had to be put into the Play-Doh. When the students touched the Play-Doh, the computer made different piano key sounds.

Ell said they were trying to find the right balance between using technology in the classroom and having the kids use pencil and paper. When asked about the balance, Haas also said it was important for kids to know how to write on paper. The teachers limit screen time and help their students understand that technology has a time and a place to be used. Ell added that using technology in the classroom assists the kids develop fine motor skills, practice focusing and develop creativity. “Technology can be fun, as well as educational when used appropriately.”

When given an opportunity, young minds can find different ways of using technology. They can share them with their friends and teachers and everyone can benefit.

All four of the first-grade teachers went from room to room with their students and gained knowledge on something new, too. It was a fun learning experience for everyone involved.