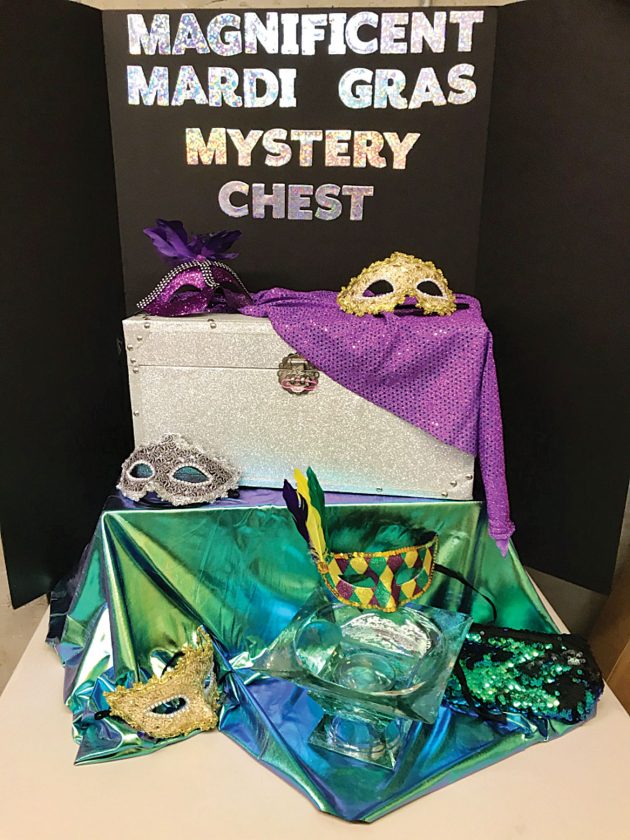 Submitted Photo The Magnificent Mardi Gras Mystery Safe will be one of the greatest prizes to be won at Celebrate 2nd Story; A Night at Mardi Gras.

The Minot community is vast in diversity in several different ways, from religions to types of disabilitiies. 2nd Story is taking steps to include those with developmental disabilities into the local community by offering them a place where they can socialize and make friends with people who are similar to them.

2nd Story was formed in the spring of 1975 by parents whose children had developmental disabilities. They wanted a place where their children could learn how to live on their own and somewhere they could go to socialize with others to successfully have interpersonal relationships with others. It started with 35 members, and grew to about 350 in the course of 35 years.

Due to not having access to a vehicle or even public transportation, they were essentially isolated in their homes. Isolation can feed into depression, anxiety, difficulties with communication and low self-esteem. Those parents wanted their children to grow and prosper, so they created the 2nd Story club to give adults that judgment free environment.

Greg Gordon, the executive director, and Katrina Leintz, the assistant director, work five days a week at the club to help individuals that are members gain skills to be more independent. Their mission is “to enhance the quality of life for adults with developmental disabilities through social, educational and recreational activities.”

To make the club even more successful, they moved to their new and easily accessible building on 1st Ave Southwest in 2004. They had to do some renovations to the space to make it fit their needs. It’s a lot bigger than their small basement space they had on Main Street. It has a television room, a kitchen, pool tables and a large activity room with a stage. Leintz said the members who attend sometimes have karaoke nights on the stage and others dance to the music.

One of the members said they were going to be doing bingo on evening of Jan. 15. They also mentioned that they usually sold raffle tickets around the downtown area to raise funds for their Snowball event, but it was too cold for them so they weren’t doing it this year.

Over the last several years, they held their Snowball event, but the board decided they wanted to do something much different this time around. The new theme is “Celebrate 2nd Story; A Night at Mardi Gras”.

The Mardi Gras party will be held at the Moose Lodge on Feb. 1. Food and drinks will be available for purchase beginning at 5 p.m., as will alcoholic beverages for those 21 and older. Children are welcome to attend to join in the festivities, too. There will be a silent auction with items donated by sponsors, a walk around raffle and some new games, like bingo, Plinko, corn hole (bean bag toss) and a photobooth with props. The funds and donations they receive will remain local.