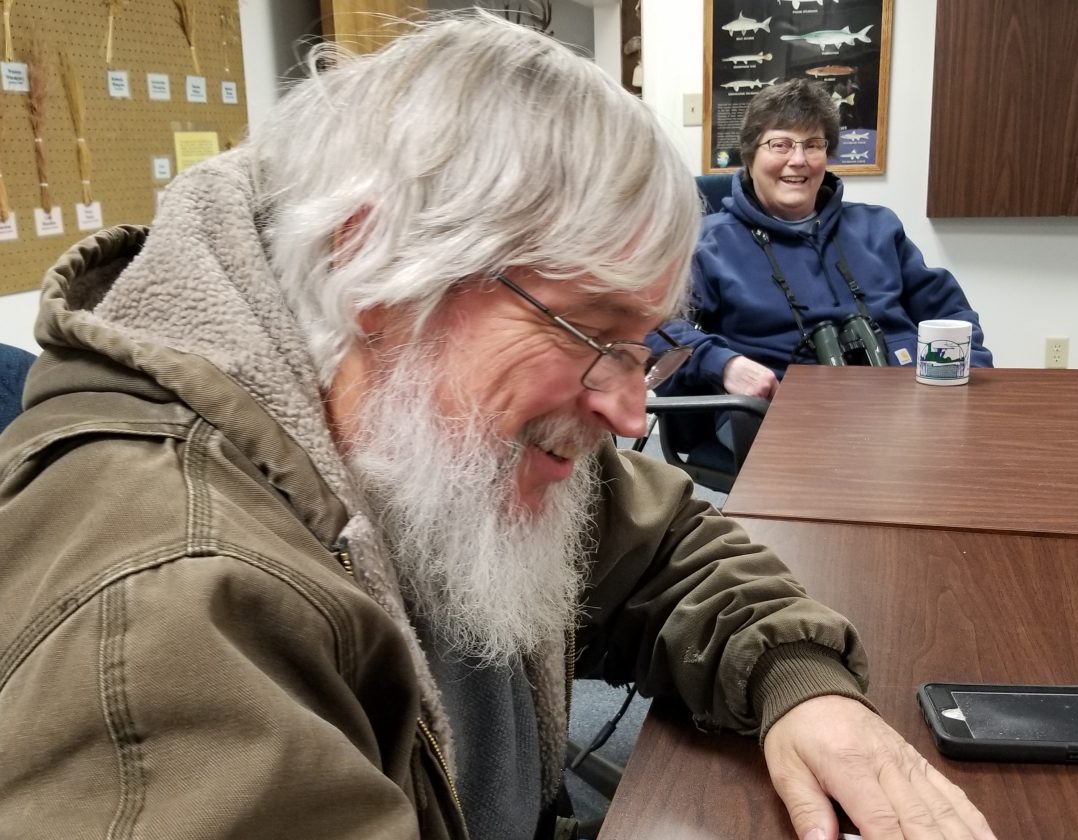 Kim Fundingsland/MDN Ron Martin, Minot, has been organizing Christmas Bird Counts in the Minot area for several years. Here he is assisting fellow birders prior to venturing out for the annual bird count at Upper Souris National Wildlife Refuge.

FOXHOLM – He put down his binoculars in favor of a more powerful spotting scope. The improved magnified view gave Ron Martin exactly what he was hoping for, a better chance of identifying specific waterfowl out of a gathering of a thousand or more enjoying a small patch of open water on Lake Darling.

Martin is co-owner of Terhorst Manufacturing of Minot, a company that specializes in injection molded plastics. In his spare time he spends many hours watching birds. Birds of all kinds. He says he’s partial to shore birds and gulls but that may be splitting hairs, or rather feathers. Fact is, if there’s a bird anywhere, any kind, Martin will likely have his binoculars pressed against his eyes.

“The best answer to my favorite bird is the last one I saw,” said Martin.

His enthusiasm for birds of all sorts shifted into high gear in 1979. Martin was a student at Goshen College in Indiana when he spent a semester abroad in Honduras.

“The faculty leader in Honduras was a birder and I kind of got interested when I was there,” recalled Martin. “I started birding when I got back in the U.S. It’s all his fault!”

The latter comment was said in jest, of course, as anyone who has been in Martin’s presence at any birding event knows very well. He always graciously welcomes new bird watchers at all bird watching events, knowing it can be a bit over-whelming at the start. At recent Christmas Bird Counts Martin encouraged the pairing of new birders with experienced companions.

“It’s good to be with people that can point you in the right direction,” said Martin. “Birding is different for every person and that’s okay. A good birder is whatever makes you happy.”

Perhaps not, but Martin remains a “go to” guy for birders throughout the region and elsewhere. His knowledge about birds, their habitats and habits, is a virtual handbook for fellow birders. Whether it be by sight or sound, Martin has learned to identify hundreds of different birds. He estimates he has seen about 700 different birds.

“I’ve traveled to some great places and met some real interesting folks,” said Martin about his birding endeavors. “I’ve met some big name birders over the years.”

Martin says he hopes to travel to Senegal, West Africa, next year to add more birds to his growing list.

“I have not been there before so I’m looking forward to being on another continent,” said Martin.

Minot’s first Christmas Bird Count, an event coordinated with the National Audubon Society, took place in 1981. Martin organized it and has been running it every year since. His long-time reputation in birding circles led to him organizing other counts as well.

“I was helping with other counts and eventually took over compiling when people left or retired,” remarked Martin . “It just happened that way.”

“The other thing is ravens,” said Martin. “We had 68 on the Denbigh count. They have become very common over there.”

Minot, North Dakota, may seem to be an odd place for an avid birder but Martin says it actually is a very interesting area from a birder’s perspective because Minot is “on the line” between Eastern and Western species of birds.

“Generally the 100th meridian is what people say is the division. In Minot we are right on the border with an interesting mix of Eastern and Western birds, a lot of variety,” explained Martin.

He’s witnessed changes in the bird world during his time in the field. Specialized birds, he says, those that like a specific habitat are in decline. Birds that frequent a variety of habitat are doing okay. Ducks, Martin said, is one species that is doing fairly well at the moment.

A big factor in the loss in numbers of many birds, said Martin, is continued loss of habitat. Simply put, “they have nowhere else to go.”

Martin encourages anyone wishing to get involved in birding, or wanting to meet fellow birders, to attend Friday morning bird walks in Minot’s Oak Park. The walks, which begin in April and continue into October, are open to anyone.

“I like birding because it’s outside and I like to be out,” stated Martin. “It’s interesting and there’s always new things to learn. You can never know it all.”