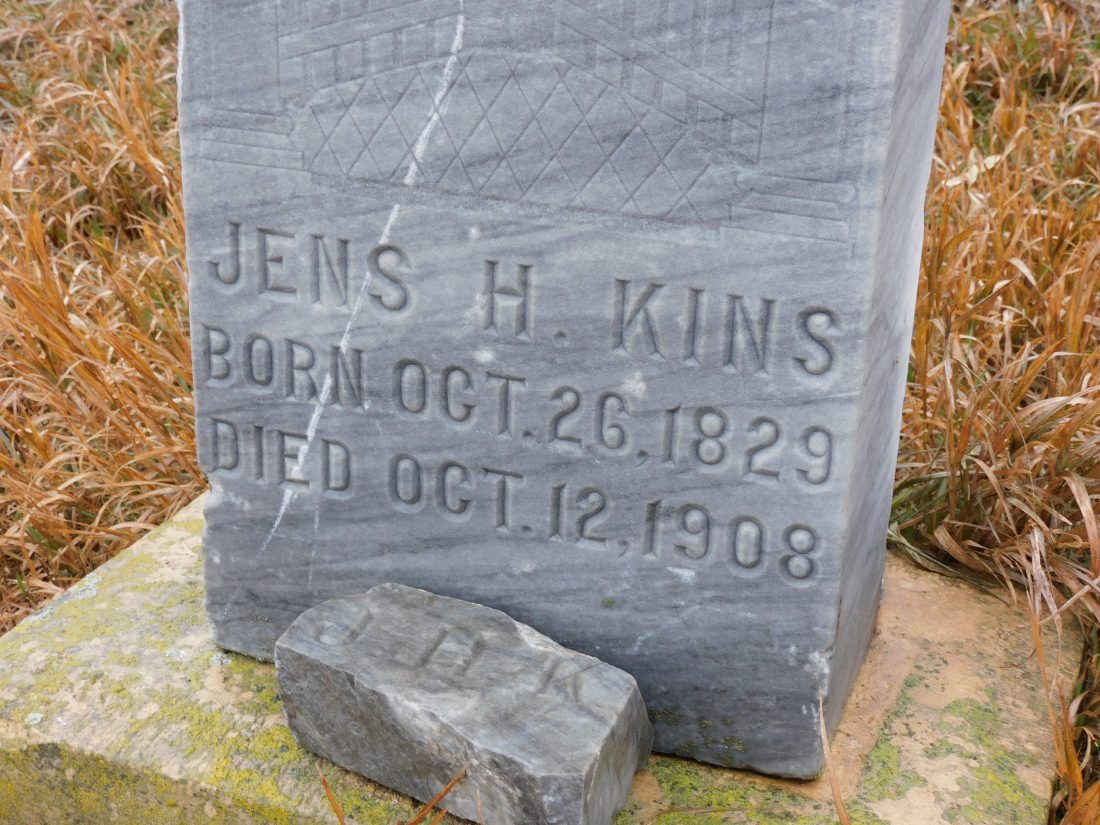 Kim Fundingsland/MDN One of only two tombstones in Three Graves Cemetery is that of Jens H. Kins who died just two weeks shy of his 79th birthday. The brick-like stone at the base of the tombstone at one time was used as a foot marker for the grave.

TURTLE LAKE – There’s a small cemetery in McLean County that contains some fading evidence of the region’s history. While old cemeteries are sometimes neglected or forgotten, the Three Graves Cemetery northwest of here remains a visible reminder of the earliest days of our state.

The cemetery contains just two tombstones and a single iron cross. One tombstone is that of Jens H. Kins. Kins was born in Norway in 1829 and died in North Dakota in 1908. The other tombstone marks the burial site of Leona Voth, who died little more than one month after her birth in 1914, and her unnamed brother. Chiseled into the Voth marker beneath the death date of Leona Voth is “infant son, July 2, 1916,” who was apparently stillborn or died shortly after birth.

Freda Voth, 91, of Turtle Lake lived in the area of the cemetery in her earlier years. Then Freda Walcker, she married Arlo Voth in 1949. Arlo Voth was the 16th of 17 children born to Frank and Ann Voth. Leona Voth was his sister.

When asked about two Voths marked with a single headstone, Freda Voth said, “They are both in the same place. I guess the son didn’t have a name.”

A rusted iron cross is planted in the ground adjacent to the Voth tombstone. Its purpose is not known. Elray Sondrol, of Washburn, who has done extensive research on cemeteries in McLean County, says he can’t say with any certainty why the cross is there. 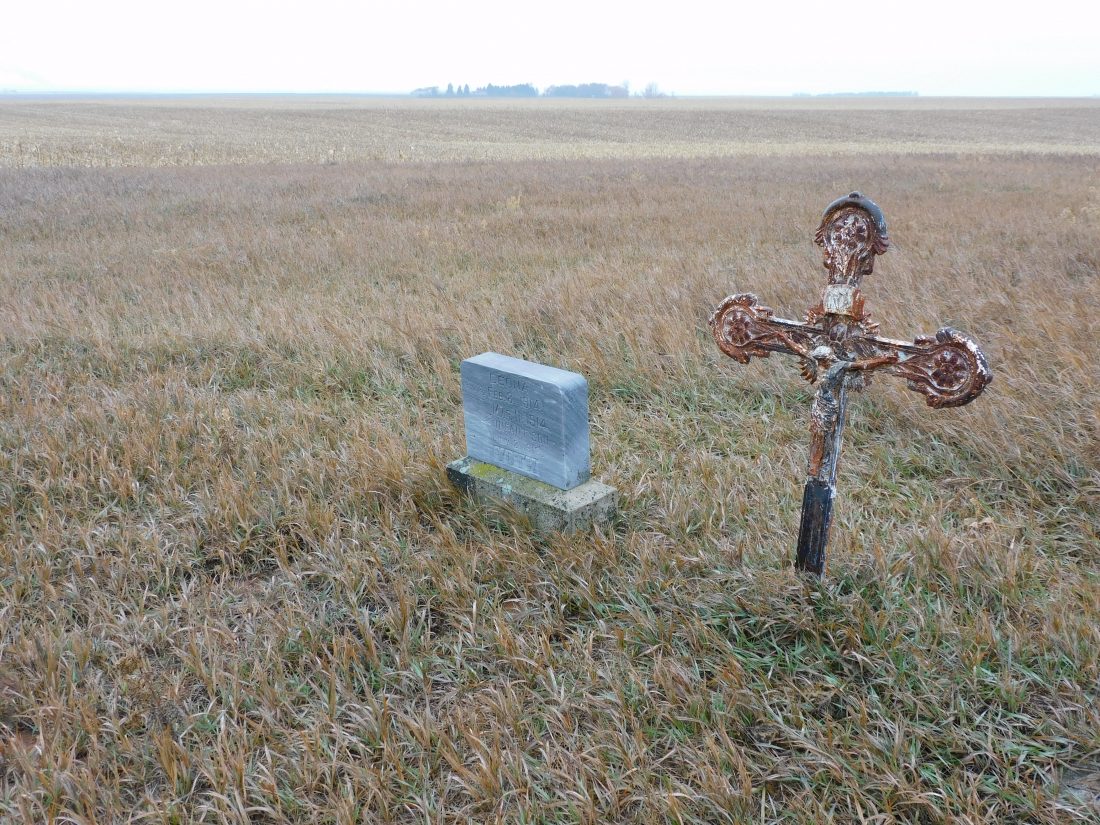 Kim Fundingsland/MDN This tombstone and iron cross are located in what is known as the Three Graves Cemetery in McLean County. While the tombstone bears an inscription of the deceased, there is no such identification on the cross.

“It could mark another family grave, maybe a child, or maybe a family member just liked it and put it there,” said Sondrol.

While Sondrol hasn’t been able to find an answer for the origin of the iron cross, there’s another location in the cemetery that he finds equally interesting and intriguing.

“There’s a rock on the ground,” said Sondrol. “We think we know who it might be but are not sure.”

The rock, which is about the size of a basketball, is located next to the only other visible tombstone, that of Jens Kins. Sondrol speculates the stone could mark the location of another member of the Kins family, possibly Kins’ wife, Marthe, since his research has been unable to discover her place of burial.

“There are two ground depressions, one by the headstone and one by the rock,” said Sondrol.

There’s another aspect of the cemetery that has captured Sondrol’s attention too, that being the position of the graves.

How and why the cemetery came to be is typical of early North Dakota prior to when country churches dotted the prairie, usually with cemeteries close by.

“As far as I know, and I’ve done some research, this cemetery was not affiliated with a church,” stated Sondrol. “It was there before churches in that area were organized and established. In those days they buried people where they had to. There’s many places where there were two or three graves and then they are forgotten. We need to remember those people and respect that land.”

“You have to show respect, right?” said Tim Eslinger, Sawyer, landowner where the Three Graves Cemetery is located. “I’m not going to farm over a grave. From what I know the history is that they were going to build a church there and never got around to it and abandoned it.”

Eslinger purchased the land from his parents 45 years ago. Like they did before him, he has carefully planted crops outside the perimeter of the cemetery even though there’s no real evidence of burial sites other than the presence of two tombstones located near the middle of the property. At one time, he said, the location had a barbed-wire fence around it.

There is no fence there today, just two aging tombstones that serve as a reminder of early day life on the North Dakota prairie.