Jill Schramm/MDN A combine harvests sunflowers north of Minot Monday in a field with wet areas.

The harvest of 2019 has been a difficult, drawn-out affair for area farmers, many of whom still have crops in the field they continue to try to bring in.

Rains that began in September, turned to snow in October and didn’t seem to want to end. It created a situation that’s been unprecedented for even those producers who have been in the business for some time. Inaccessible fields and deteriorating crops have been a challenge all season.

“2019 will be one they will remember for many years,” said Jim Hennessy, agricultural agent with Mountrail Ag Agency. “We had good yields. We just couldn’t get it.”

The harvest now is likely to extend into December, and possibly later, according to those in the ag industry. 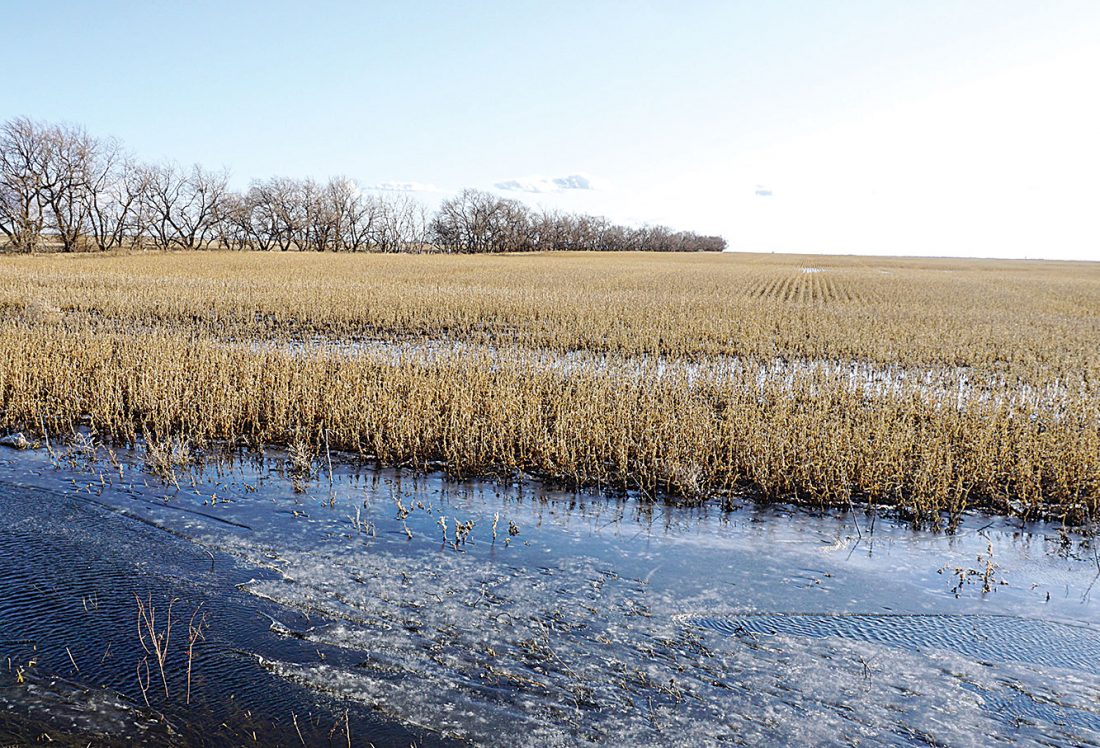 Jill Schramm/MDN Standing water makes it look more like spring than fall in an unharvested field north of Minot.

“Unfortunately, there’s a lot of standing crop out there, but not all that is out there is harvestable or will be,” said Ward County Extension Agent Paige Brummond, Minot.

Ward County producers have been harvesting sunflowers and corn this past week. The amount of crop abandoned to federal crop insurance varies around the region as a good share of the wheat was harvested in most areas before the rain came.

However, lower yields and reduced quality affected nearly every crop not taken off early, Brummond said.

“Most people got their peas off in really good condition before the rains came, but everything later in the fall was pretty tough,” she said.

Mark Patterson, operations manager with Border Ag, Bottineau, said much of the wheat harvest was accomplished in that area before the fall rains came. Some standing grain is awaiting crop insurance adjustments. Soybeans also are completed, but corn was still standing this past week as farmers face moisture content as high as 28% to 35%. 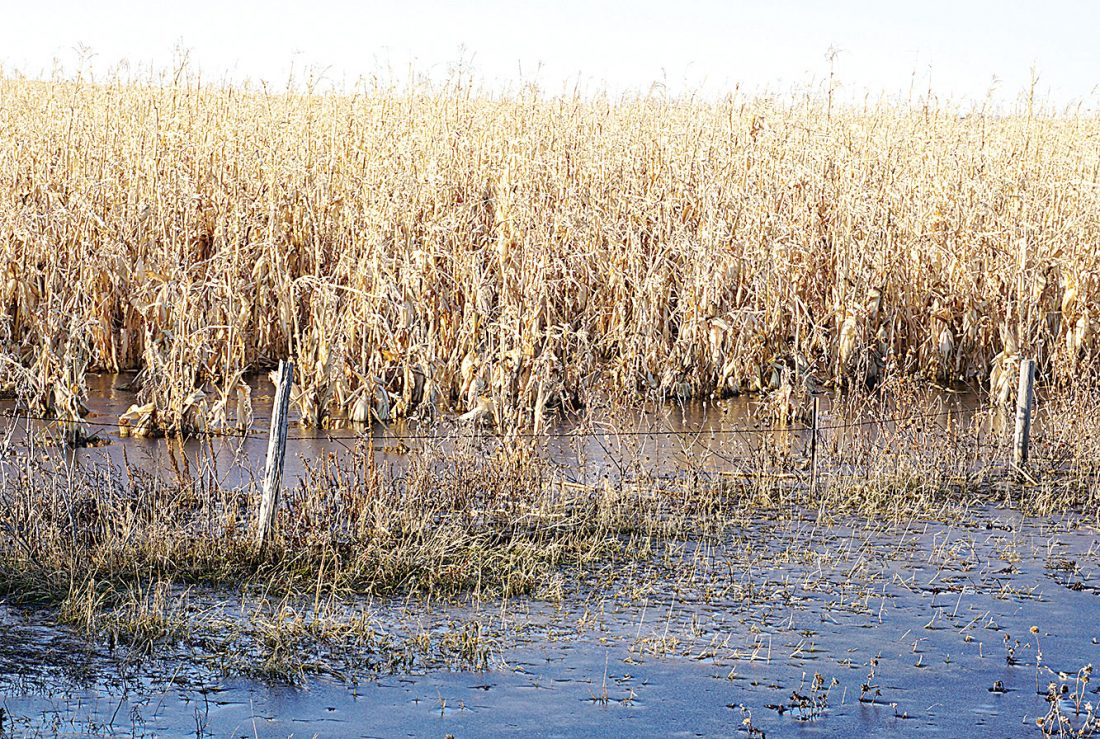 Jill Schramm/MDN Water from melted snow and rain this fall floods a portion of a corn field near Minot.

Patterson said farmers are leaving the corn for now in hopes it will dry down some while others are harvesting and drying on the farm.

Renville County Extension Agent LoAyne Voigt, Mohall, said this past week that plenty of crop remains to be harvested there.

“Almost all of our corn is still out in the field. They are waiting for that to dry down. It’s still pretty wet, but I am assuming they will probably be taking it before too long and will have to do some drying with it,” she said.

Producers have been going after soybeans first.

“They are doing pretty good with soybeans, and I believe that the sunflowers and the corn will be OK, too, other than maybe a little bit of moisture and they will have to dry them,” Voigt said.

With corn, the biggest issue with drying is the resulting shrinkage and loss of weight, she said.

Chris Gratton, general manager at CHS Garrison, said both the sunflower and corn crops look to be of good quality in the Garrison area.

“Both crops will be pretty good crops, if they can get them,” he said. The corn crop around Garrison generally goes to Blue Flint Ethanol, which has been drying the crop it takes. However, much of the corn is 21% to 25% moisture – well above the 17% or less that Blue Flint advertises it will take for drying. Gratton said farmers are storing the corn in air-heater bins to try to get it to the point at which it can be dried.

“We have had these issues before, and they have left it out there until spring. They have had to in order to let it dry,” he said. “This will definitely go into December, and even January probably, if they can’t get it off dry. Some will just leave it out there until it does dry, if it’s in January, February or March. I would hope they have a majority off by Dec. 1.”

McHenry County Extension Agent Rachel Wald, Towner, said most of the crop left in the field in McHenry County is corn, because of the high moisture and the difficulty in retrieving it.

“One of the issues besides the dry-down weather is we didn’t get enough growing-degree days during the season for the corn to mature fully,” she said of the cool fall. “We are going to see some issues with the crop because of that.”

Cameron Erickson, general manager at Rugby Farmers Elevator, spoke of problems with wet corn as in other parts of the region.

“We have been drying here at the elevator, but we have to try to keep it down to 22% or less,” he said. The elevator isn’t taking corn at lower test weights at this time, either. Even at a discount, farmers can’t sell light test weight corn so they are storing it and waiting for the market to change.

“It’s a year of quality issues,” said Erickson, who listed soybeans as somewhat of an exception.

“It’s more of a function of how many acres were you able to combine where you weren’t getting your combine stuck,” he said.

Burkhart, who said corn ideally should get down to 15% moisture and sunflowers to 10%, said the crop drying demand in the Midwest has led to difficulty getting propane.

“Getting propane for dryers is going to be a headache in the next 30 to 45 days,” Burkhart said. “It’s been the worst harvest, I think, for anybody as far as drying.”

The Federal Energy Regulatory Commission announced this week it will initiate an alternative dispute resolution process with pipeline companies, shippers and their representatives to explore actions to alleviate propane pipeline constraints. FERC also issued an order that will provide an emergency transportation service for propane to the Midwest for a 30-day period.

Jeff Kittell, general manager at Plaza-Makoti Equity Elevator, said some producers have had to shut down their dryers temporarily to wait on propane supply. Moisture content has been an issue with most crops.

“Soybeans all came off wet and just miserable because of the weather, but the yields were good,” Kittell said.

The biggest concern with sunflowers is saturated soils have caused some to tip over, said Hennessy, who estimated a potential 25% to 30% yield reduction. The corn has seen some sprouting where ear tips have been exposed.

“But for the most part, it should be all right, maybe a little bit lighter test weight,” Hennessy said of the corn.

“The crop that didn’t turn out at all this year was the flax. I maybe have only seen one or two fields that were worth a darn and they were planted late,” he said. “The other crop that wasn’t worth a darn was canola. A lot of that is standing in the country – basically standing out there, shattering out.”

For livestock producers, Brummond noted, “The challenges are endless.”

Producers couldn’t get corn chopped for silage on time, leaving them with a cold, dry crop that resembles frozen chopped corn rather than heat-processed silage, she said.

Hay producers also were hurt by continual rains as bales sat in water. Producers who were able to get bales out of the field and stack them found the bales taking on water and reaching moisture levels of 30%, Hennessy said. Producers were told to stack bales in single rows to allow air flow and prevent heat entrapment and fires.

As harvest finishes up in his area, Hennessy sees challenges continuing.

“The biggest issues we will see next spring – guys dealing with all these fields that are all rutted up or have all the residue because it didn’t get combined,” he said. He predicts a late spring due to all the moisture going into fall.

“We will be seeding in June,” he said. “I don’t think we will see anybody getting into the fields to seed until May.”

With significant corn acreage yet to harvest, Paul Thomas of Velva is weighing some tough options regarding when to take out the combine.

“The corn that we have combined has been good, but it was also seeded earlier than the rest of it and it seems to have matured quicker and yielded better and weighed better,” Thomas said. “The remaining corn crop that’s out there is really wet.”

At 22% to 25% moisture and at a lighter test weight, the corn presents a dilemma. To try to dry down the corn creates problems with kernels breaking apart and adds cost that can make the process n

Submitted photo This massive bull moose will likely enter the record book as one of the largest ever taken by bow and arrow in North Dakota. Ben Stremick, Minot, filled his once-in-a-lifetime tag in September.

Submitted photo Ben Stremick, Minot, with a 6×6 bull elk taken with bow and arrow in the Fort Peck area of Montana one week before bagging a bull moose in North Dakota.

Jill Schramm/MDN Water from melted snow and rain this fall floods a portion of a corn field near Minot.

Jill Schramm/MDN Pam Sagness, director of the Behavioral Health Division, speaks about a redesign of state services at a community meeting in the Sleep Inn & Suites in Minot Friday.

Jill Schramm/MDN A combine harvests sunflowers north of Minot Monday in a field with wet areas.

Submitted Photo The Minot Symphony Orchestra musicians and patrons donated men’s winter gloves and socks at their performance on Nov. 16. A total of 121 pairs of socks and 19 pairs of winter gloves were collected and donated to the Men’s Winter Refuge. Items are still being collected and can be dropped off at Lien’s Jewelry through Nov. 30. Pictured are Ellen Fenner, executive director of the Minot Symphony Orchestra, and Mike Zimmer, executive director of the Men’s Winter Refuge.

Submitted Photo The community of Minot took home the Barksdale Trophy for the outstanding community support to an Air Force Global Strike Command base during the 2019 Global Strike Challenge scoreposting on Wednesday at Barksdale Air Force Base, La. From the left are: Col. Glenn Harris, commander of the 91st Missile Wing at Minot Air Force Base; Bruce Christianson and Brekka Kramer, members of the AFGSC Civic Leader Program; and Col. Bradley Cochran, commander of the 5th Bomb Wing at Minot Air Force Base. Photo by Carla Pampe, AFGSC Public Affairs.

Jill Schramm/MDN Standing water makes it look more like spring than fall in an unharvested field north of Minot.

ot economical. With test weight and damage discounts, the $2.50 a bushel offered at the local elevator isn’t enough to break even, Thomas said.

The option is to try to gain natural dry-down by leaving the crop in the field over winter.

“We are making the decision to leave our corn stand for quite some time. It could very well be March before we combine our corn crop,” he said. “It’s a really tough decision for all of us. Do you take it now – a bird in the hand is better than 10 in the bush – or do you wait?”