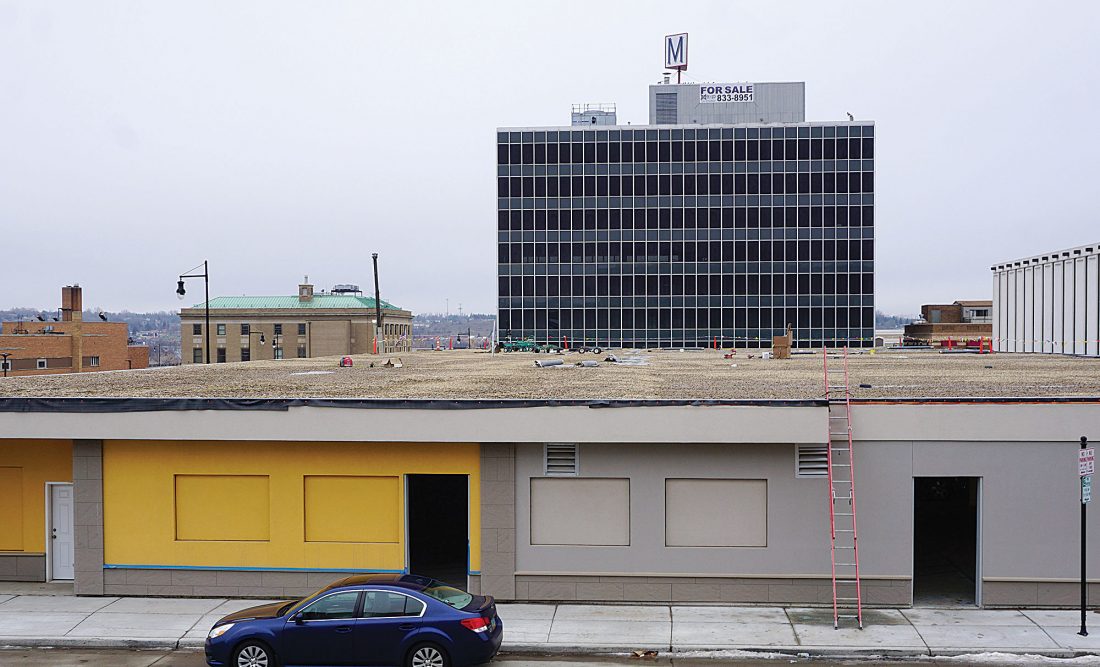 Jill Schramm/MDN Roof work is ongoing on the Renaissance parking structure in downtown Minot. The city contracted with Rolac Contracting to install roofs and drainage systems on the two downtown parking structures.

The developer of Minot’s two downtown parking ramps and an affiliated subcontractor are suing the project’s general contractor in federal court in North Dakota.

Cypress Development and Diversified Development, which list their principal places of business as Las Vegas, brought the lawsuit along with owners Steve Larson of Las Vegas and Barclay Armitage of Portland, Ore., against Shaw-Lundquist Associates of St. Paul, Minn., on Nov. 13.

The lawsuit alleges Shaw-Lundquist failed to adequately pay Diversified Development for work on the ramps. Plaintiffs seek damages in excess of $75,000.

The court document recounts that the City of Minot and Cypress entered an agreement to construct two downtown parking garages. Cypress planned to construct residential housing above the garages and retail space on the main level. Cypress also had the right to lease the parking structures to manage parking and collect revenue for 99 years and would own the residential and retail spaces.

On a third round of bidding, the city ultimately accepted Shaw-Lundquist’s bid as general contractor to construct the garages.

According to the complaint, instead of relying on the personal guarantees, Shaw-Lundquist suggested to Larson and Armitage that they form a construction company with bonding capacity to subcontract components of the project. Shaw-Lundquist then would release them from their guarantees. Larson and Armitage formed Diversified Development, which signed two subcontracts for $3.34 million for each garage.

Because the project involved public funds, Diversified Development had to obtain performance bonds on the subcontracts. Larson and Armitage executed personal guarantees on the bonds.

“This is a common construction practice that SLA (Shaw-Lundquist) knew or should have known would occur when it took steps to cause Larson and Armitage to form Diversified Development to subcontract with SLA,” the complaint stated.

In addition to damages, the lawsuit seeks court costs, other relief deemed just by the court and a jury trial. Plaintiffs are represented by the Serkland Law Firm in Fargo and Schwabe, Williamson & Wyatt, P.C., of Portland, Ore.

Shaw-Lundquist declined comment at this time and has not yet filed a response to the complaint.

Shaw-Lundquist had begun work on the Renaissance and Central ramps in October of 2013. In the fall of 2014, work stopped amid concerns that subcontractors were not being paid. It became apparent that the ramps could not be completed for the original bid price of $10.5 million. Parties were able to pick up the pieces of the project, later estimated to cost around $19 million. The city committed more than $9 million to erecting the parking ramps, mostly from Community Development Block Grant-Disaster Recovery dollars and the MAGIC Fund.

The Renaissance ramp, which fully opened in February 2016 with 225 spaces, is located south of the big “M” building in downtown Minot. The Central ramp opened in May 2016 with another 225 parking spaces along Central Avenue.

The Minot City Council voted in March 2018 to end its relationship with Cypress Development on the parking ramps. It called in loans that were at $1.77 million with interest at the time and sued Cypress to recover costs. Cypress filed counterclaims with allegations that included misrepresentation and breach of contract. The lawsuit in North Central District Court remains in a discovery phase that is scheduled to continue into January.