Many journeys from Hawaii to North Dakota to hunt deer 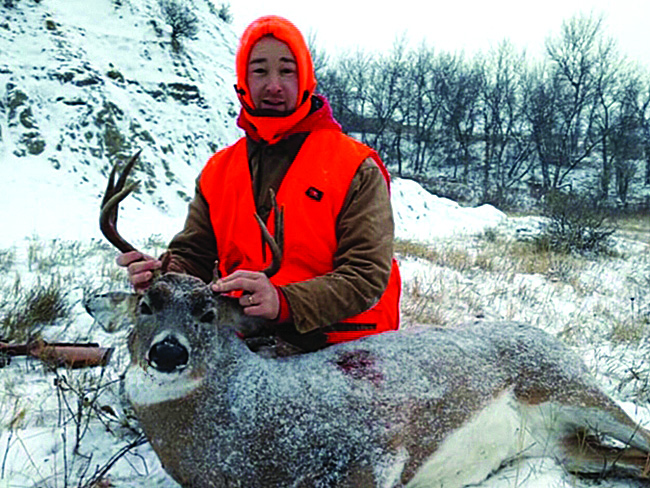 Submitted Photo Brian Priess, a former Minoter, made the trip from Hawaii to North Dakota to hunt deer this season for the first time in 17 years.

Who comes from deep underwater and then travels over 7,000 miles to hunt deer?

The answer is Brian Priess, a 17-year veteran of the U.S. Navy who has been stationed in Hawaii for the past 11 years.

“I’m in the submarine service,” said Priess. “I’m originally from Minot but hadn’t been deer hunting since joining the Navy in 2002. This year I was able to make it work.”

Making it work required flying more than 3,500 miles one way from Hawaii to Minot and back again, a distance Priess described as “quite a bit.”

“Most times I have been traveling for the military and totally miss the deer hunting season,” said Priess. “I’m doing my work and not thinking about North Dakota. This year I applied for a deer tag and thought maybe I’d go home if I got drawn.”

Priess was fortunate enough to draw a tag and have time to make the long trip from the warm weather of Hawaii to much more winter-like North Dakota. True to his roots, he easily made the adjustment from sunshine and high temperatures to snow flurries and wind chills.

“It’s normally around the mid-80’s this time of year in Hawaii,” said Priess. “Then I went down to single digits. But I love the cold. You can always put more clothes on. In Hawaii it’s all about air conditioning. It definitely was brisk though.”

Priess was one of a group of eight hunters hunting together north of Stanton and the only one of the party to fill a tag opening weekend.

“Saying that it was a thrill is pretty much right,” said Priess. “It was awesome. It was made a little difficult because the ground was so moist that most of the corn wasn’t harvested. The deer stayed in the corn all day.”

The white-tailed buck harvested by Priess was taken to a processor with much of it to be made into sausage. In the meantime Priess was back aboard a plane for his return to Hawaii and a waiting submarine. However, after another 7,000-plus miles in the air, he’ll get to enjoy some of the results of his hunt.

“I’ll be back at Christmas,” said Priess. “It was just nice to finally go deer hunting again and I’ll take some of that deer meat back with me.”