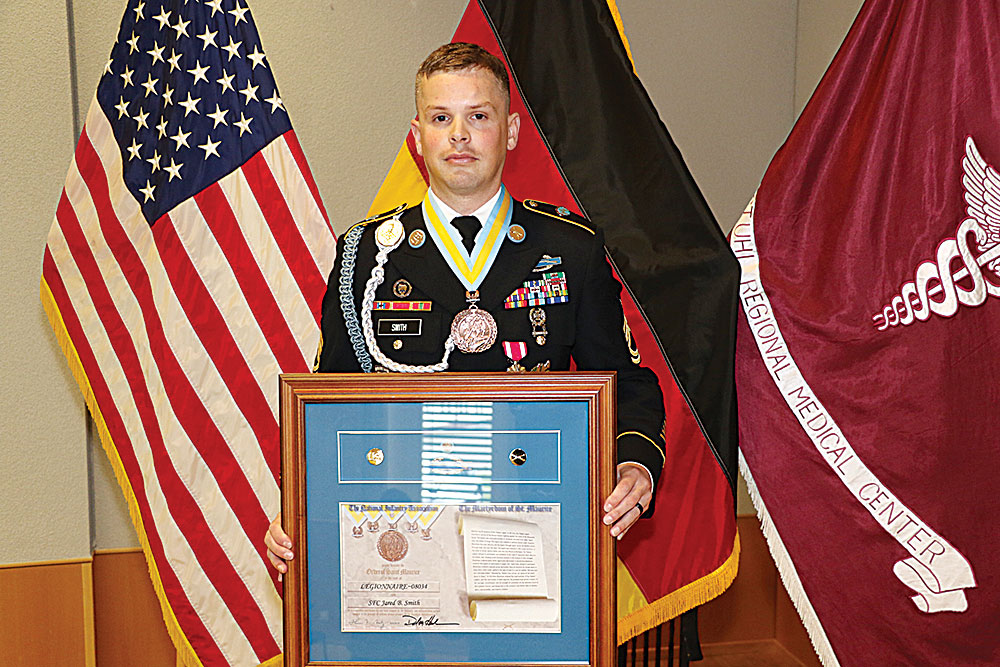 Submitted Photo U.S. Army Sgt. 1st Class Jared Smith, an infantryman assigned as a platoon sergeant with the Medical Transient Detachment, Landstuhl Regional Medical Center, displays his awards and medal as a new inductee into the National Infantry Association’s Order of Saint Maurice, shown in this photo by Alofagia Oney of Landstuhl RMC.

LANDSTUHL, Germany – It is not every day that a medical organization gets the opportunity to witness extraordinary ceremonies for U.S. Service Members with occupational specialties outside of healthcare delivery. Military leaders of Landstuhl Regional Medical Center recently helped honor U.S. Army Sgt. 1st Class Jared Smith, an infantryman assigned to LRMC’s Medical Transient Detachment, as he was inducted into the National Infantry Association’s Order of Saint Maurice on Oct. 9.

The Order of Saint Maurice recognizes individuals who have significantly contributed to the infantry in ways that stand out in the eyes of the recipient’s senior leaders, subordinates and peers. The award is categorized into five different levels – Smith received the Legionnaire medal, the highest level of the order he can obtain at his current duty position.

With 15 years of active duty service, Smith, a Minot, North Dakota native, has seen his fair share of combat and trauma, having deployed twice to Afghanistan and once to Iraq. With over 400 combat patrols and 70 direct fire attacks, Smith’s experience on the battlefield shaped him to fit perfectly within the mission of the Medical Transient Detachment at Landstuhl Regional Medical Center.

“The MTD is the only unit of its kind within the Army inventory,” said Command Sgt. Maj. Anthony Forker, the senior enlisted soldier of the LRMC Troop Command that serves as the headquarters for the detachment. “They are responsible for facilitating the advanced inpatient treatment of wounded warriors as well as the intensive outpatient care for injured and ill personnel across all branches of service coming to LRMC from four different combatant commands.”

Forker, who nominated Smith for induction into the Order of Saint Maurice, said that the detachment has 10 infantrymen on its cadre, an intentional placement by the U.S. Army Medical Command to help wounded warriors progress in their treatment at the medical center. With the military occupational specialty of 11B infantryman, these 10 soldiers are the only combat arms warfighters in the hospital’s troop formation.

“Our infantrymen share the same experiences as our patients,” said Capt. Caleb Perkins, detachment commander.“By incorporating infantry soldiers into our cadre as squad leaders and platoon sergeants, we can provide more compassion, more empathy and better care for the soldiers, airmen, sailors and Marines that come to the hospital.”

During his three-year assignment to the detachment, Smith served as both a squad leader and currently as a platoon sergeant, and has played a critical role in the timely disposition of over 7,000 military personnel either returning to duty in support of theater operations, or redeploying back to the United States for further care.

“Smith is one of our silent professionals,” said Forker. “His ability to train others, his willingness to help and never ask for recognition, and the way he conducts himself outside of work just made it really easy for me to want to nominate him for this award.”

Smith is set to rotate out of Germany in the next several weeks, receiving an assignment to the 3rd Infantry Division at Fort Stewart, Ga., where he will reunite with his wife, Jennifer, and their children.

“This is a very humbling experience to be recommended and approved for the award,” said Smith. “I’ve been here [without my family] for the last 19 months, and it’s been a very trying time, but a very rewarding time. I want to thank the MTD for supporting me and being there for me when I needed you.”

Smith was also awarded the Meritorious Service Medal for his exceptional service while at Landstuhl Regional Medical Center.