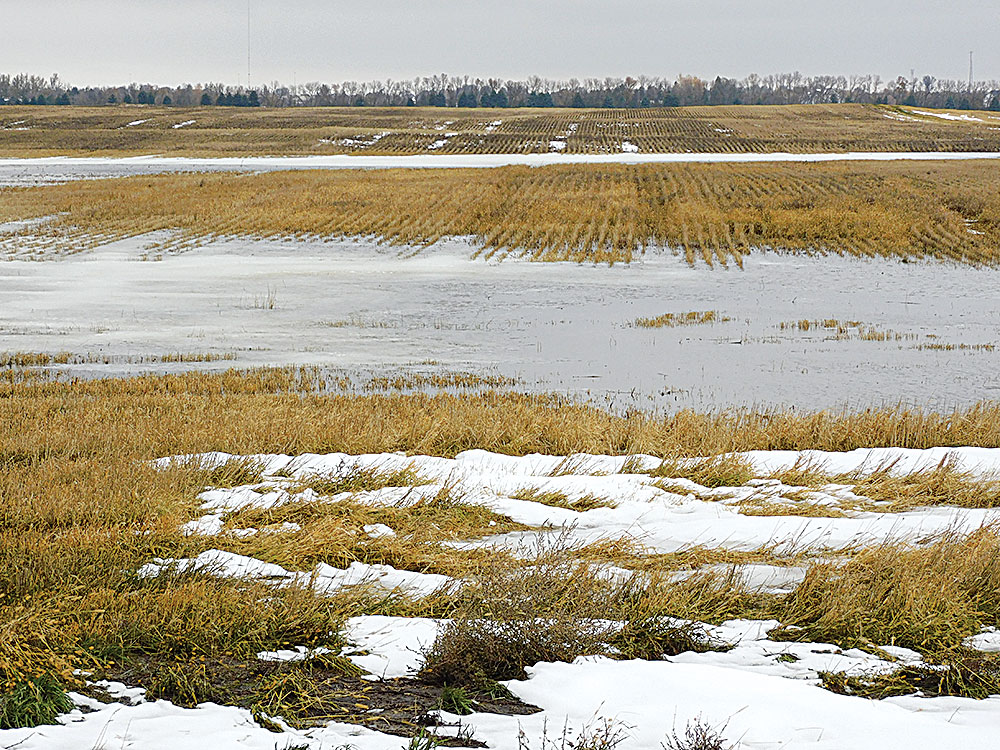 It’s wet out there. The wettest in more than a century. Virtually from border to border North Dakota is extremely soggy, causing problems for farmers and ranchers and even raising the risks of spring flooding.

The recent wintry mix dealt a cruel blow to two areas of the state where there is understandably growing concern about spring runoff. Both the Souris River that flows through Minot and the Red River that cuts through Fargo and Grand Forks on the state’s eastern border have a long history of escaping their banks.

The Red River on the state’s border with Minnesota is flirting with flood stage levels now, something that is expected in the spring but never this late in the fall. Not to be overlooked is the James River that flows through the Pipestem and Jamestown Dams. The U.S. Army Corps of Engineers has called a public meeting for tonight in Jamestown to address citizen concerns about current high water levels.

“It’s a slow moving river. Right now they are struggling to get back down to where they want to be,” said Allen Schlag, National Weather Service hydrologist in Bismarck. “It’s quite unusual to see this kind of runoff generation at this time of year in North Dakota.”

Schlag said that while the James may touch “minor flood stage,” doing so would have very low impact. He noted that the river is not “out of control.” However, high water in any river or reservoir in North Dakota at this time of year is unusual. It is not surprising though, especially following a very wet September and an early October snowstorm that dumped up to 30 inches of snow in some parts of the state.

“North Dakota had the wettest September ever, with 125 years of data,” said Schlag. “So far October is above for moisture too. It’s been remarkably wet. Pretty much the whole state is wet.”

The Souris River Basin escaped the bulk of the recent snowfall and has seen only a minimal increase in flows. Still, like elsewhere in the state, soil conditions are extremely wet throughout the basin.

“What really gets me here is impacts to the soil, really hard to imagine it is mid-October,” said Schlag. “We have roughly 30 to 40 days, if the weather turns around, to lose some of this soil moisture. My optimism is waning by the minute.”

Notable too is that potholes are currently filled to springtime levels with little or no room to capture any spring runoff. It’s a condition that could aggravate the spring runoff.

“How much has never been defined mathematically, but we do know it has an effect,” said Schlag. “When wetlands are full we tend to see more runoff.”

On the heels of record September precipitation in the Minot area, and other reporting points, October is setting records of its own. According to Joe Effertz, who measures snowfall at the North Central Research and Extension Center south of Minot, three inches of snow fell Oct. 9 and 10 and another inch on Oct. 11. The latter two totals tied daily records set in 1959 and 1973.

While all indications are that soil conditions will remain very wet heading into freeze-up, increasing the odds of increased runoff, it is far too early to surmise what conditions will actually be encountered during next spring’s runoff season.

One of the major factors affecting spring runoff, said Schlag, is temperatures that contribute to the speed of the melt.

“It we drag out the spring melt season, say for weeks instead of days, it makes a world of difference. Especially if you can do it without significant rainfall,” explained Schlag.

While wet ground can mean trouble come spring, there are many areas of the state already coping with similar conditions. The Harvey region, with 30 inches of snow, was at the center of the recent snowstorm that plastered much of the state east of Minot. Because wet conditions made it almost impossible to harvest and the snowstorm struck at one of the earliest dates in memory, many crops remained in the field when the snow began falling.

“The standing soybeans were completely full of snow to the top of the plants,” said Joel Schimke, Harvey Farmers Elevator manager. “On the north and west sides of the corn fields the snow was as high as the tassels on the corn.”

Schimke was optimistic that most of the crops in the fields would still be harvested, some with as little as five-percent loss. The expense of doing so however, has increased.

“It’s terribly muddy,” said Schimke. “If nature gives us a chance at it guys are going to try and get their crops off. A lot of guys are putting tracks on their combines. The ground is going to have to freeze for a wheeled combine.”

According to Schimke, several farmers purchased used tracks for their combines while others purchased new at a cost of $75,000 a pair.

“They are gearing up to get it done. That’s just the way it works,” said Schimke. “With tracks on a combine they can drive through the water.”

In addition to farming troubles due to wet conditions, of interest to residents all along the Souris River Valley is the moisture situation in southern Saskatchewan where three reservoirs capture and regulate water that eventually enters the Souris.

The Canadian reservoirs on the Souris are all at or within inches of their prescribed winter operating levels. Lake Darling, the final reservoir on the Souris above Minot, was at 1,596.92 feet Tuesday afternoon and is scheduled to be lowered to 1,596 feet by Feb. 1.