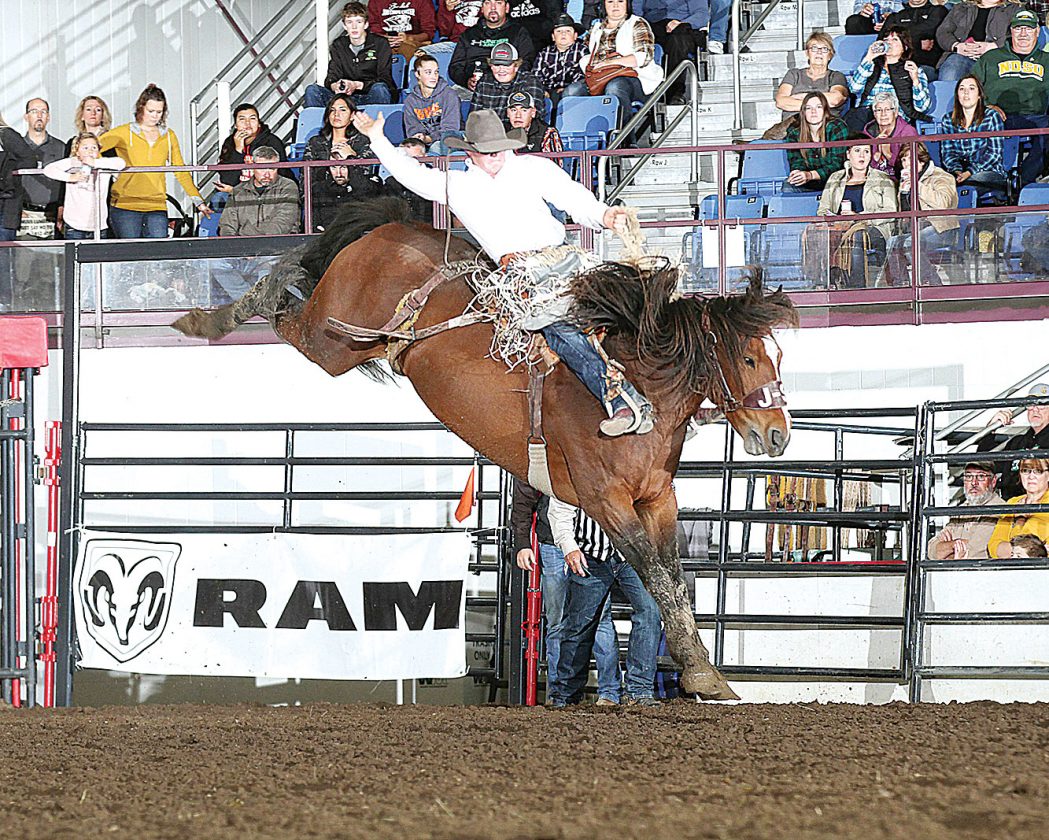 Submitted Photo Shorty Garrett of Eagle Butte, S.D., won the average at the 2019 RAM Badlands Circuit Finals Rodeo. He had a combined score of 336.5 points on four head. Photo by Cowboy Images/Peggy Gander.

The cowboys and the cowgirls came to Minot to play, and they did.

Ninety cowboys and cowgirls converged on the Magic City to compete for nearly $200,000 and the title of Badlands Circuit champion.

Champions were crowned in each of eight events, with the final destination being the RAM National Circuit Finals Rodeo, where the champs from each of the continent’s 14 circuits will duke it out for national titles in April of next year.

It was steer wrestler Joe Nelson’s first trip to a circuit finals rodeo, and he made this one count. 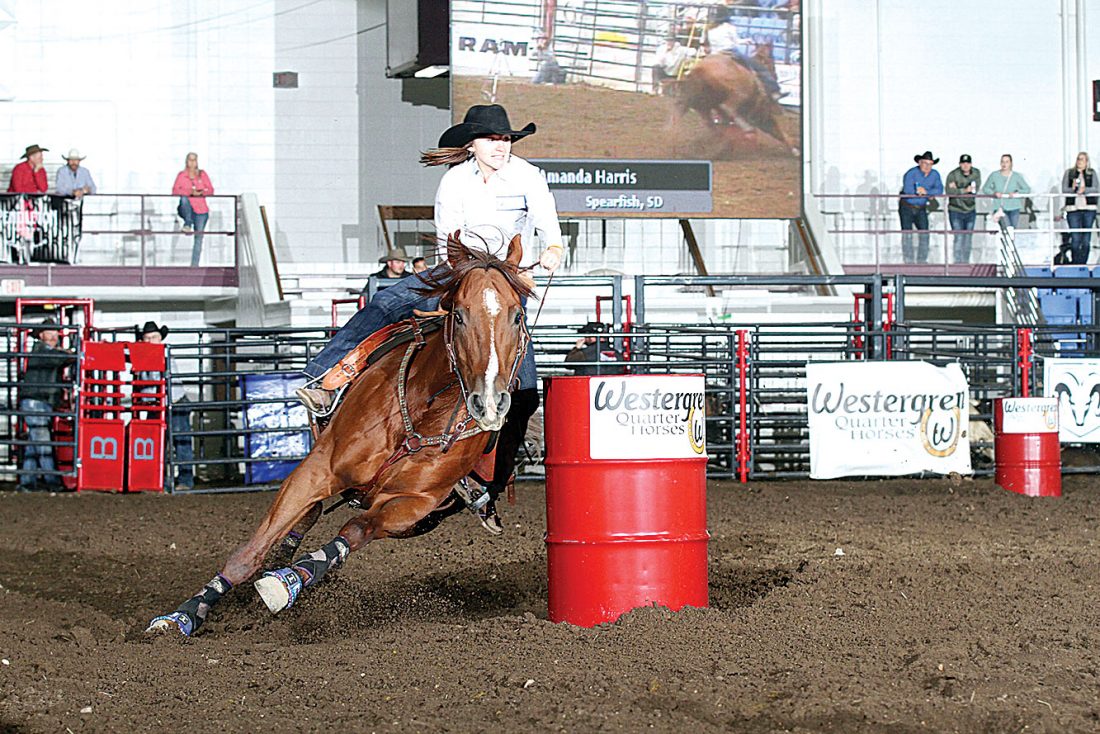 Submitted Photo Amanda Harris wins the barrel racing average at the RAM Badlands Circuit Finals Rodeo. The Spearfish, S.D., cowgirl will represent the circuit at the RAM National Circuit Finals Rodeo in Kissimmee, Fla., in April 2020, along with Jessica Routier, who won the year-end title. Photo by Cowboy Images/Peggy Gander.

The Alexander cowboy came into the RAM Badlands Circuit Finals Rodeo in third place in the standings, and won a check in three out of four rounds to win the average, the fastest time on four runs.

His 20.2 seconds on four head was only one-tenth of a second faster than Cameron Morman, of Glen Ullin, who finished second in the average with a time of 20.3 seconds.

“I was pretty excited to get here,” Nelson said. “My main goal was to catch all four (steers), get out of the barrier, and get four down.”

Eli Lord, of Sturgis, S.D., won the year-end steer wrestling title and was leading the average until the fourth round, when he missed his steer and didn’t get a time. But rodeo contestants, especially steer wrestlers, are the first to help their competitors; Nelson was helping with Lord’s steer in the chute before. “We all root for each other,” he said. “We want everybody to do well.”

Nelson rode his horse named Balls, who he purchased last year. The horse is outstanding, he said. “He scores really good, runs hard, tries, and gives me a good chance.” When Nelson’s traveling partner Tyler Thorson’s horse was hurt in July, Thorson also rode Balls. “For the month of July, that horse had at least four runs on him everywhere we went,” Nelson said.

Nelson won the Badlands Rookie of the Year Award. He is a graduate of North Dakota State College of Science at Wahpeton.

He and Lord will represent the Badlands Circuit at the RCNFR in Kissimmee, Fla., April 2-5, 2020.

Team ropers Jon Peterson and Trae Smith have roped at jackpots before, but this year, for the first time, they partnered up for pro rodeo, and did well all year.

They entered the circuit finals in first place with enough of a lead to fend off the competition, which was good, since they only placed once, winning first place in the first round.

“Luckily we won that first round or we wouldn’t be doing this interview,” Peterson joked.

The two are students at Gillette (Wyo.) College, where Peterson is an upperclassman and Smith is a freshman. They’re doing well in the collegiate ranks, too, having won the college rodeo at Riverton, Wyo., two weeks ago and being ranked in the top four in the collegiate region. “It was good to get that win in Riverton before coming here,” Peterson said. “It was a confidence builder.”

Peterson’s horse was injured two weeks ago, so his friend and fellow roper Levi O’Keefe lent him his good horse. Guy Howell also rode O’Keefe’s horse, named Slick, at the circuit finals. “He didn’t mess up a single time,” Peterson said of the bay gelding. “I think that is the best head horse right now. It was unreal. He was outstanding.”

The two were atop the board for each of the four rounds of rodeo, with each one of them winning two rounds and placing second in two rounds.

But it was Howlett who won the average, a mere two and a half points ahead of Breuer.

Howlett, who is originally from Australia but now lives in Rapid City, S.D., rode with broken bones in his foot and a swollen hand because of being smashed in the chute during the matinee on Saturday.

The Eagle Butte, S.D., cowboy won money in three of four rounds (first place twice and tied for first once) to win the average.

The 26-year-old cowboy has qualified for the Badlands Circuit Finals four times, but this was his best year ever, due to new traveling partners, Isaac Diaz and Brody Cress. “I jumped in with a whole different crew, and I’ve been fortunate to have them as traveling partners. I owe a lot to Ike (Diaz). He keeps a guy positive and keeps a guy going. I look up to that man quite a little.”

The three cowboys make it fun. “Whenever we get in the rig,” he said, “we’re not going to work, we’re going to have fun, and that pays off.”

JJ Elshere, of Hereford, S.D., won the year-end title. He had more than a $10,000 lead coming into the circuit finals, but because of a broken leg suffered 10 days ago, wasn’t able to compete at the circuit finals.

In the barrel racing, Amanda Harris won the average title with a time of 55.05 seconds on four runs, just two-tenths of a second ahead of Cally Kindred, of Spearfish, S.D.

She never dominated the leaderboard, but she was one of only five cowgirls out of the 12 to not knock down a barrel, adding a five second penalty to their time.

She was aboard her nine-year-old gelding, Frenchmans Firefly, “Firefly,” a horse raised and trained by her parents, Bob and Peggy Welsh of Gillette, Wyo. She first brought him to the circuit finals in 2016, as a six-year-old. In 2017, she was pregnant with her son, and last year, she rodeoed in a different circuit.

The horse has developed and grown, she said. “This year, he seemed a lot more mature mentally, and he’s been awesome for me all year.”

She and her husband Shawn’s kids, a daughter, who is four, and a son, who is two, are already anticipating a trip to Disney World, when their mother competes at the RNCFR.

Jessica Routier, of Buffalo, S.D., won the year-end title for the Badlands Circuit.

Tie-down roper Trey Young, of Dupree, S.D., won both the year-end and average titles for his event, aboard his horse Fozzy, an 11-year-old sorrel who has twice been chosen the Badlands Circuit Tie-down Roping Horse of the year. This will be Young’s second trip to the RNCFR; he competed there in 2017, finishing in third place.

Bull rider Jeff Bertus snuck out a year-end win in his event, riding two of his four bulls with enough of a lead to take the title. Bertus, of Avon, S.D., finished second in the average to Chance Schott, of McLaughlin, S.D., who won the average with a score of 255 points on three head.

The all-around title for the year-end and the finals went to Eli Lord, of Sturgis, S.D.

Rodeo Rapid City was voted by the contestants as the Rodeo of the Badlands Circuit.

The Minot Y’s Men’s Rodeo is a not-for-profit venture by the YMCA Men of Minot. Proceeds from each year’s rodeo benefit the Triangle Y Camp at Lake Sakakawea, near Garrison. Next year’s Badlands Circuit Finals Rodeo is tentatively set for Oct. 9-11.

The 2020 Miss Rodeo North Dakota was crowned during the RAM Badlands Circuit Finals Rodeo, hosted by the Minot Y’s Men’s Rodeo, on Sunday in Minot.

The 23-year-old cowgirl is a graduate of Kindred High School, where she was involved in FFA through livestock judging and horse judging and won several national and state awards for her work.

She is a barrel racer and the daughter of Randy Enander, Sandy Johnson and Jeremy Alm. 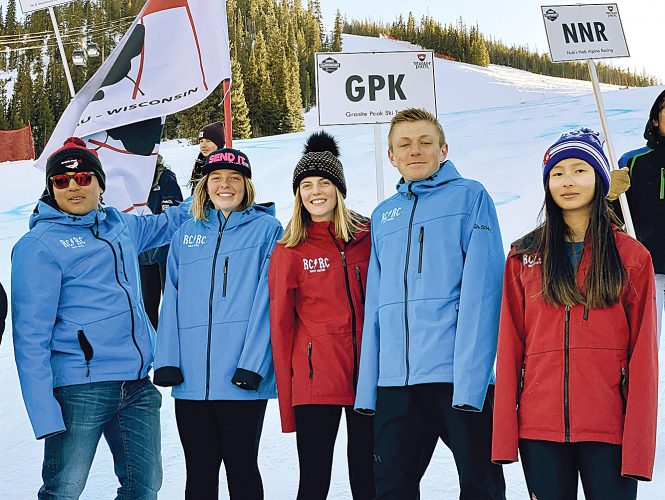