Rev. Gerjets: Church members called upon to ‘love our neighbors’

ELCA declared itself a ‘sanctuary church body’ at conference 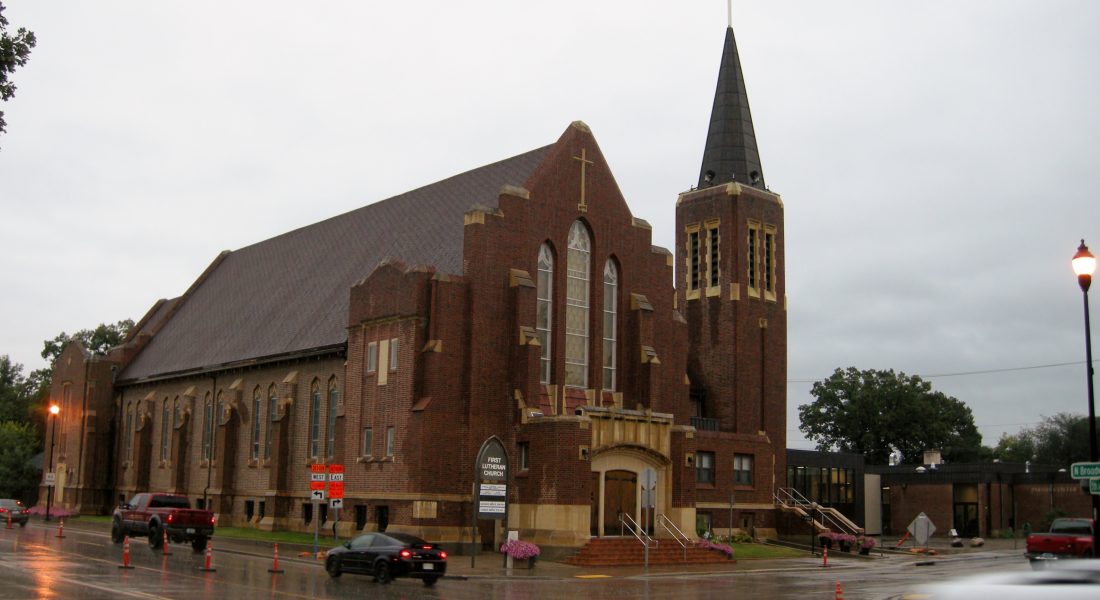 Andrea Johnson/MDN First Lutheran Church in Minot is pictured on Friday. Rev. Brandy Gerjets, lead pastor, said an ELCA resolution in support of undocumented immigrants is not likely to dramatically impact how First Lutheran carries out its ministry and mission in Minot, but church members are called to love their neighbors.

Rev. Brandy Gerjets, lead pastor at First Lutheran Church in Minot, said in an email last week that she doesn’t think day to day operations at the local church will be much changed by an Evangelical Lutheran Church of America resolution in support of undocumented immigrants. However, Gerjets said the members of the church are called upon to share God’s love with their neighbors.

Earlier this month, at a conference in Milwaukee, the Evangelical Lutheran Church of America declared itself “a sanctuary church body,” according to an article at relevantmagazine.com. The group then nailed their theses, in imitation of church founder Martin Luther, to the door of the Immigration and Customs Enforcement building. The theses express concern for an ICE policy of separating some migrant children from their parents or other adults and turning away refugees. They also expressed general concern about the way that undocumented immigrants and asylum seekers have been treated by ICE.

“Neither I nor anyone from First Lutheran was at the assembly to take part in this conversation and decision, but I do hear that debate was robust,” said Gerjets in the email. “Now that our churchwide assembly has made this declaration that the ELCA is a sanctuary church body, each congregation has the discretion and authority to decide how and if they will engage the declaration. I imagine there will be varied expressions of ‘sanctuary’ across the ELCA, depending on local contexts and what people observe as the needs of their community members.

“At this point, I can’t see how this particular declaration would dramatically impact how we carry out our mission and ministry at First Lutheran in Minot. First and foremost, I think, the value of this declaration for us is as a reminder of what we should already know: that how we treat our neighbors and talk about our neighbors is absolutely a matter of faith–be they refugees, asylum-seekers, immigrants, strangers or people who look and live just like us. As Christians, we cannot separate our discourse and attitudes about society from our faith. Our relationship with a living, loving God must continually inform how we live, speak and act, day by day, here and now, especially with regard to complicated social issues.

“I know in this political climate this declaration creates some worry and concern. Our church leaders have been clear that this is not a call for anyone to undertake illegal activities. It is a call to reflect and enter conversation about how to faithfully live as witnesses to Jesus’ unending love and abundant grace in these complex times. But, then, that has always been the church’s constant task. Obviously the church can’t solve the immigration crisis, but the church also cannot ignore the central call of our faith, which is to love God and love our neighbors.”

Rev. Mark Narum, the bishop of the ELCA in western North Dakota, did attend the assembly, according to Gerjets. She said Narum sent out a statement in a letter to pastors after the assembly.

“I ask you to be in prayer over the entire immigration system in our country. For political leaders that they would sit down across the table from one another and find solutions, that those being detained would be cared for humanely, that families who are separated would be reunited, that together we might find other opportunities as a church to build systems of hope, safety and financial security so people do not feel it necessary to migrate,” wrote Narum.

Most undocumented immigrants in the United States live in California, Texas, Florida, New York, New Jersey and Illinois, according to a 2016 Pew Research study. By comparison, western North Dakota has a relatively low number of immigrants, though the population has been growing.

The Minot Public Schools recently hired additional English Language Learners teachers to serve the growing population of students from immigrant families. Already, more than two years ago, the district boasted that it served more than 200 students who spoke English as a second language. As of Friday, there were 151 students in the district receiving ELL services, according to Assistant Superintendent Tracey Lawson, but she said those numbers will likely grow over the next couple of weeks as new students enroll and are assessed for language ability. In addition, 100 students in K-12 in the Minot Public Schools are immigrants, Lawson said.

A few years ago, some of the ELL students spoke more than 35 different languages as a first language. Lawson said the number of languages might actually be a little higher now.

Lutheran Social Services of North Dakota has helped provide services throughout the state for immigrant families.