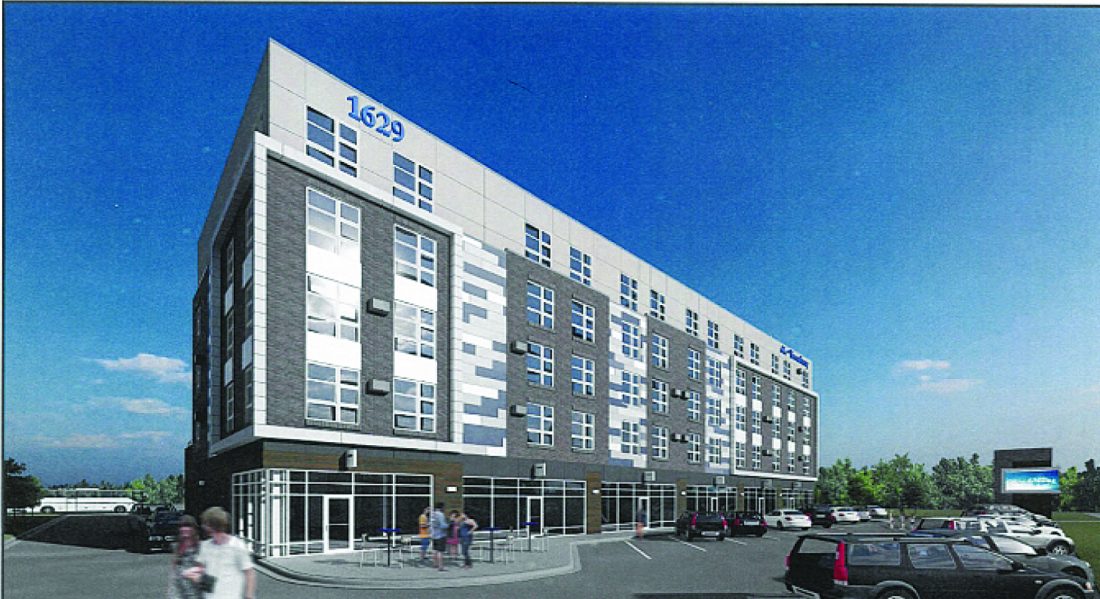 Submitted Photo An architectural rendering shows the concept plan for Blu on Broadway.

Low-income housing would be a component of a commercial and residential building proposed on South Broadway by a local development company.

The project received the favor of the Minot Planning Commission Monday. The project is under consideration for up to $4.75 million from the city’s National Disaster Resilience grant program.

EPIC Companies is seeking a Planned United Development for a mixed-use building at the site where the Pepsi bottling plant once stood at 1629 S. Broadway. Ground-level commercial office space of about 8,800 square feet would have four floors with 42 residential apartments above it. The units range from studio apartments to two bedroom. Plans call for an underground parking garage.

Known as Blu on Broadway, the project’s drawback is that the density of 30 units per acre is nearly twice that allowed in ordinance. Lowering the density by removing a floor raises concern about potentially impacting qualification for financial incentives the developer is seeking.

Also, the off-street parking is substantially lower than required. The developer justified reduced residential parking in pointing out that not all low- to moderate-income (LMI) residents will have a vehicle or, if they do, it is unlikely unit residents will have more than one vehicle. The development also relies on the shared-use parking concept, assuming residents can use parking spaces in the evening and the commercial businesses can use them during the day.

The developer is working with Minot Park District and the city to develop an outdoor recreation space, possibly featuring a small splashpad and a playground, which would be open to the public.

Todd Berning with EPIC Companies said Blu on Broadway, which is the company’s 12th mixed-use project, will create a positive project with taxable real estate.

“This site scored very, very high within HUD because of the walkability,” he said, noting it is near a grocery, bank, public transportation, schools and churches. The Department of Housing and Urban Development is the grantor for the resilience dollars.

“Frankly if this gets approved and gets all the way through, it’s going to be the nicest LMI building in the state,” Berning said. “We just don’t believe that people who are in this demographic and income limit need to live in anything less.”

Planning commissioner Tim Baumann said it is good to create a residential project where having a vehicle isn’t necessary.

“Even if they did have a vehicle, it’s not something they would have to use, and it’s a service to our community to create those areas where we can get there actively by foot without any additional expense,” he said.

Karen Jensen, who owns neighboring property, supported the project, although with some concern that parking might spill over to her lot if crowded at Blu on Broadway.

“I think it’s just a marvelous idea, but that means we need more parking,” she said. “But I think it would be nice for the neighborhood, actually.”

The commission’s approval carries some conditions, such as restricting direct access off Broadway and committing at least 3,000 square feet of the commercial space for office use rather than retail to reduce the parking demand.

The commission’s recommendation goes to the Minot City Council for consideration next.