National Night Out planned for Aug. 6 at Magic City Campus 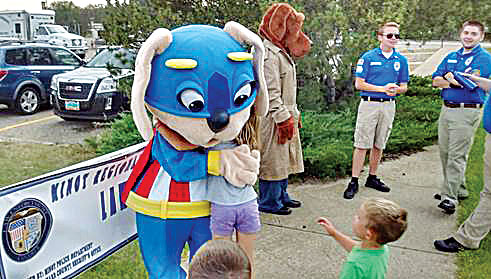 The National Night Out has grown a lot over the last nine years, said Senior Officer Aaron Moss, the crime prevention officer for the Minot Police Department.

“The first year we had about 300 curious onlookers, a DJ, some ice cream and some door prizes and that’s about it,” said Moss.

In past years as many as 3,000 people have attended the event to watch police dog demonstrations, see inside squad cars, or the NorthStar Criticair helicopter, and interact with police officers and other first responders.

This year’s event will be held Tuesday from 5:30 to 8 p.m. on the practice field of Minot High School-Magic City Campus.

“I think by and large the Minot community and surrounding communities have historically shared a very positive relationship,” said Moss.

He said the National Night Out event provides a safe environment where the public and law enforcement can interact in a positive manner.

The event will include free games and prizes, inflatable bounce houses, the NorthStar Criticair helicopter, displays of law enforcement and equipment displays from Minot Air Force Base, federal, state, county and city agencies and departments, educational booths from businesses, non-profit agencies and area governmental agencies, according to a press release from the City of Minot.

There will also be police dog demonstrations. Three dogs are currently assigned to the Minot police department and there are also K-9 units at Minot Air Force Base. Moss said he doesn’t know which dogs will be at the event, but people always seem to enjoy seeing the dogs.

Moss said food will also be available at booths.

National Night Out is also a national event that has occurred in different locations since 1984. It is encouraged to foster understanding between police and the public they serve and to promote public safety.

The Minot event is police/community partnership, according to the press release.

It is free and open to the public.