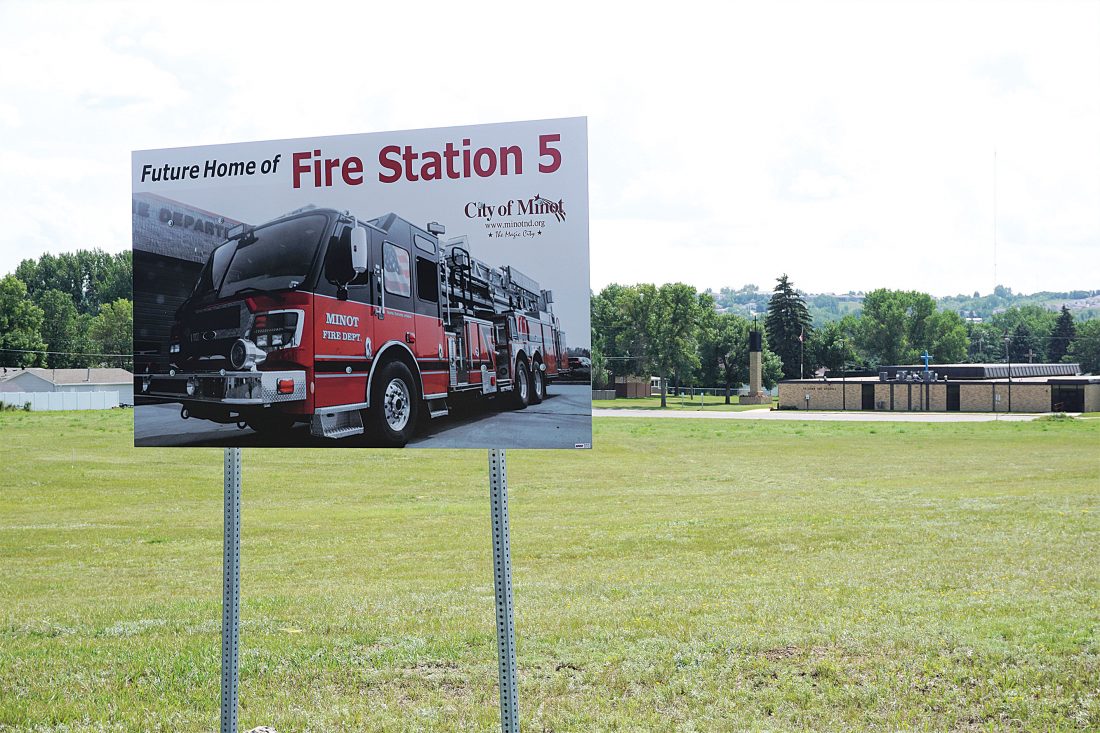 Jill Schramm/MDN A sign marks the future home of a proposed fire station in northwest Minot on property south of Fourth Avenue and east of 27th Street.

A new fire station in northwest Minot could begin construction as soon as next year, depending on decisions of the Minot City Council in coming months.

The city owns land on the west edge of the city on Fourth Avenue for construction, but planning for a fifth fire station in Minot has been slowed by funding considerations.

“We were struggling with how to bring that station online economically and responsibly. We know that we need to improve service in northwestern Minot,” City Manager Tom Barry said. “When we looked at how to bring Station Five on, the initial estimates were something on the order of about $3.5 million dollars for construction and about $1.8 million of continuous, ongoing operational costs. The capital part of it isn’t really the huge concern because we have had some reserves set aside for city infrastructure, including the fire station. It’s the $1.8 million of ongoing operating.”

That operating cost equates to about 9 mills of property tax, making the project unpalatable in the current budget, Barry said.

Fire Chief Kelli Kronschnabel and her team worked, along with Barry, to explore an alternative, minimum manning approach to include the new fire department. It is essentially a less labor intensive way to provide the same service, Barry explained.

Under the traditional model, the department would need another 12 to 15 to staff a new fire station. The proposal developed would allow the city to bring on a fifth station with only three additional personnel, at a cost of less than $315,000.

“But we’ll also be able to meet all of the response times, all the service and quality goals that we have for set for ourselves,” Barry said.

“It took some work,” Kronschnabel said of the transition, but she added, “It’s safer in the long run.”

She said the department finally has been able to achieve full staffing of 68 personnel. That includes 60 firefighters on the station shifts, which is nine fewer than would be required under the previous staffing model.

Barry said the alternative manning scenario envisioned with five stations allows flexibility for fewer personnel on certain shifts, such as wee hours of the morning when calls are more sparse. It allows for shifting personnel among stations in response to where call priority exists.

“That’s how we’re able to bring Station Five on with what we have estimated as only about a $315,000, per year commitment, which is maybe a mill and a quarter. That’s a huge savings to the city,” Barry said. “This is the approach that I’ve had since I’ve come to the city – using data analytics to drive better decision making.”

He said the city would not consider the plan if it meant sacrificing safety of its personnel or the quality of the service.

“We’re confident that we can do both of those things and provide the station, with minimal impact to overall, ongoing operating costs,” Barry said.

The 3.5 million for construction and an estimated $674,279 for equipment for a new station could come from reserve funds. Barry said reserves are available because the city has had salary savings due to open positions and better than expected revenue projections, including nearly $3 million more in Hub City funding from the state next year.

The proposed 2020 budget calls for a three-year period to construct the new station. However, council members at a budget workshop earlier this summer discussed the potential for condensing that period to two years. At a retreat in July, the council again discussed accelerating construction by breaking ground in 2020.

Barry said there is money in the preliminary budget for design to be completed next year. If the council also wishes to start construction in 2020, it can make that decision at any time through a budget amendment to tap into reserve funds for that purpose.

A northwest fire station was one of several topics discussed by the Minot City Council at a retreat July 30 and 31 at the Lewis & Clark Interpretative Center in Washburn.

The council had held a retreat last October and felt it warranted repeating in 2019, City Manager Tom Barry said. The meeting was open to the public, although Barry noted no one from the public did attend.

“The council was really deliberate about not making decisions. They were conscientious about that,” he said. “The retreat is really about getting more information and providing more context and an opportunity for open discussion, dialogue, debate about issues.

“The benefit of these retreats is it allows for more in-depth information sharing and debate,” he added. “When you have that, you have better decision making.”

The council referred some of the topics discussed to future city council meetings for public input and further discussion as well as possible decisions. For instance, a discussion on recycling will occur Oct. 21.

Further discussion on the proposed fire station could take place Monday when the council holds a budget review session. That meeting will take place at 4:15 p.m. in Minot Municipal Auditorium, Room 201.