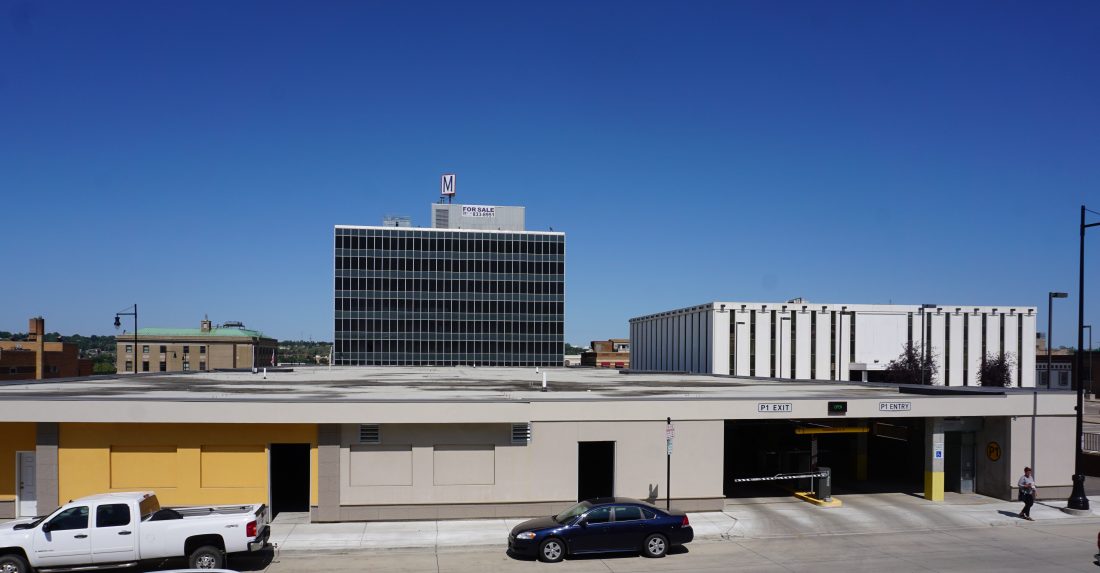 Jill Schramm/MDN The Renaissance ramp, shown Monday, and the Central ramp both have city staff constantly plugging holes and sealing leaks in the podium decks, which are structural slabs for future building rather than true roofs.

A roof and drainage system at Minot’s two downtown parking ramps isn’t going to be near as expensive as anticipated, but it still is estimated to cost taxpayers $946,125.

The Minot City Council on Monday accepted the bid of Rolac Contracting for $870,000 to place roofs on the ramps. The full cost estimate includes architectural services and contingency. The city had budgeted $1.5 million this year from tax dollars. It received just the one bid for the work.

City staff have been constantly plugging holes and sealing leaks in the podium decks, which are the structural slabs on top of the ramps for future building, according to the city engineering department. The parking structures were designed to accommodate apartments on top. The apartments and ground-level commercial space stalled, in part for reasons of economic changes locally and a lawsuit ongoing between the city and developer over compliance with an agreement. Those details include back rent the city says is owed and differences between the parties on who is responsible for aspects of project funding.

The council would like to complete the ramp roofs by the end of this year to protect the structures and allow for safer, cleaner structures.

City Engineer Lance Meyer said the roof system will need to be removed when housing is built over the ramps. The time frame for any housing construction is uncertain, though. There is no plan at this time for any housing. The roofs should last 10 to 15 years without significant work to preserve them, Meyer said.

In other business, the council approved setting aside up to $5.5 million of National Disaster Resilience grant funding for low- to moderate-income, multi-family housing for an expansion at Beyond Shelter’s 40-unit senior housing project, Cook’s Court, in south Minot.

The expansion proposal is for another 56 units. Beyond Shelter has determined there is market need in the area of affordable senior housing, but the city will not actually provide money until the organization has leveraged dollars through tax credits, grants or other sources to meet the requirement for releasing any NDR funds.

John Zakian, city resilience program manager, said with the Beyond Shelter project, the city has enough affordable, multi-family housing projects in the pipeline to potentially spend the full $20 million made available by the Department of Housing and Urban Development for that portion of the NDR program.

“This fits more of a niche and need that we have,” Straight said of the Beyond Shelter project.

In other business, the council:

– heard from concerns of residents of southwest Minot regarding a proposed storm sewer district in the area of 10th Street, from 31st to 37th avenues. Residents raised concern about the project design and the potential for drainage to cause flooding to some homes.

– received a report from Public Works Director Dan Jonasson regarding annual aerial mosquito spraying, which the city conducts with the assistance of Minot Air Force Base. Jonasson said spraying typically has a 40% to 80% effectiveness rate in mosquito kill. This year’s mosquito count showed a 74% reduction at a cost of $37,807. The council acknowledged receiving concern about health risks, but Jonasson noted the chemical has been approved by the Environmental Protection Agency since 2006. The spraying takes place at night to avoid bee kill.

– The council reviewed the proposed $275 million budget for 2020. The budget adds staff positions for a drafter in the engineering department to accelerate project design and reduce outsourcing costs and a code enforcement officer to catch up on the workload. The budget proposes a tax levy of 121.29 mills, or $976.99 for the owner of a median home valued at $179,000. This would be down from $1,035 this year, largely due to shifting of city recreation department functions to the park district.

The council discussed accelerating construction of a fifth fire station to a two-year rather than a three-year project. Because funding would come from reserves that already exist, the council did not need to amend the preliminary budget but will address the issue again at a later time.