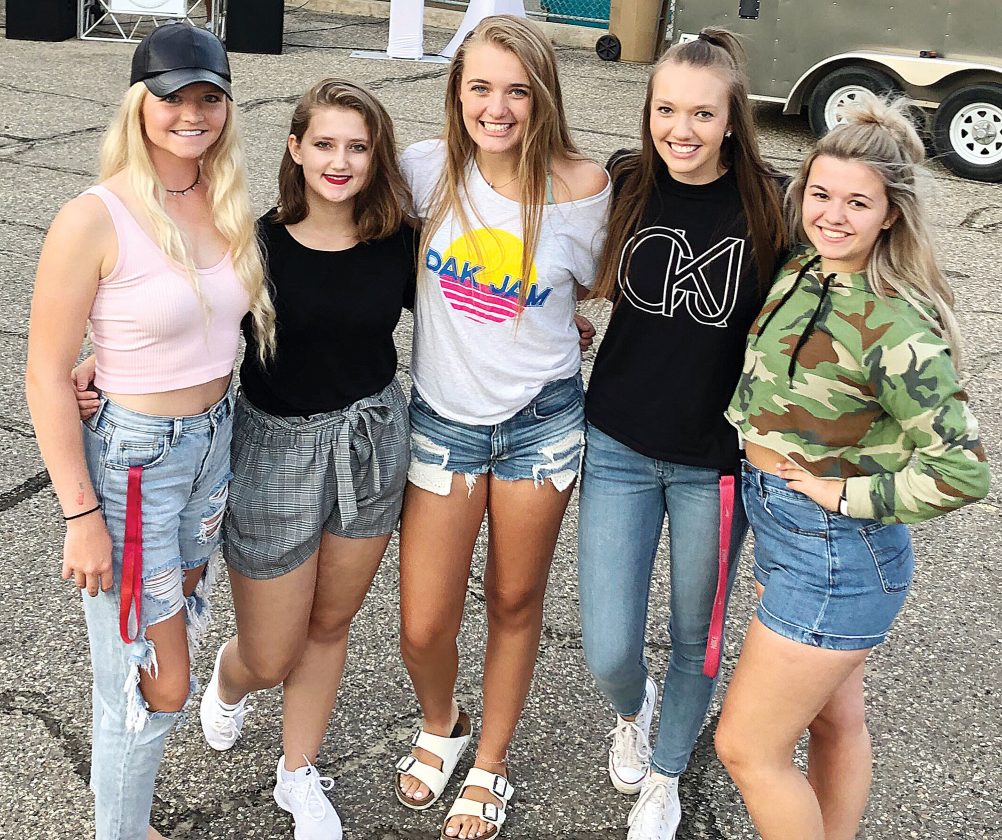 Increased self confidence and a stronger desire for community involvement were among the gains experienced by teens who participated in a pilot program this summer called Champions for Change.

Souris Basin Planning Council kicked off the program in June with five participants, all juniors or seniors at Magic City Campus this fall.

“I realized that it’s a good way for me to get my foot in the door and learn about community involvement, from hands-on experience,” said participant Izzabella Starkey. “As I grow older, I can continue to be involved in my community.”

According to the program’s statement of intent, empowering youth to become Champions of Change in their communities has the potential to increase local college and university enrollment from local high school graduates or increase the number of young people returning to their hometown after completing college elsewhere. Additionally, by retaining youth who are involved in the community, it creates an opportunity for entrepreneurship and rural job growth, changes in civic leadership and increased involvement in local government. 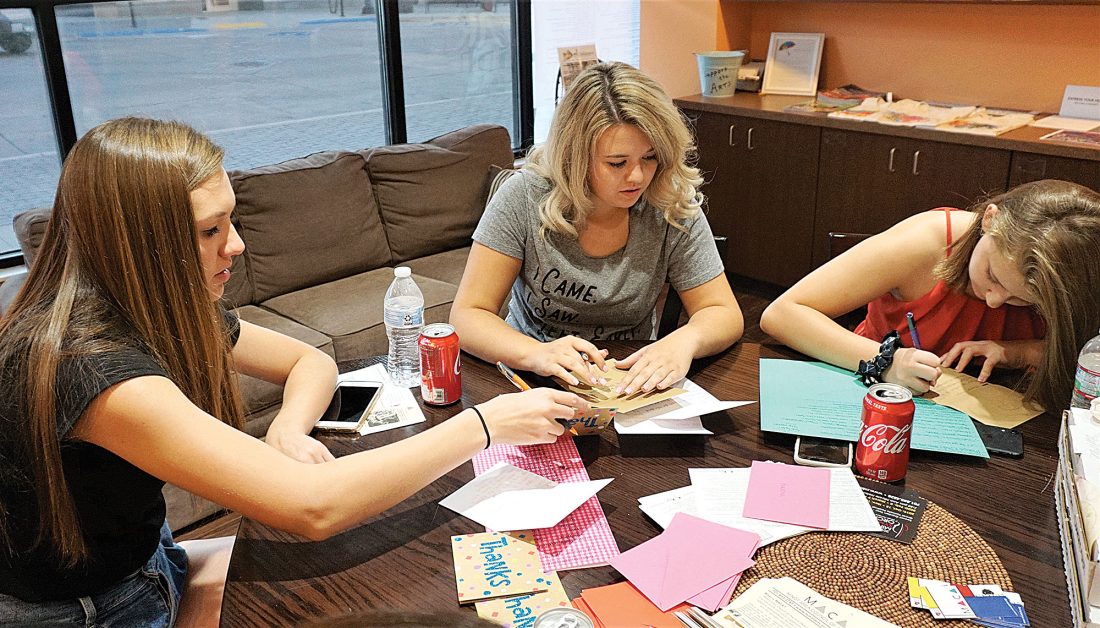 Jill Schramm/MDN Chloe Watterud, Adriana Bakk and Izzabella Starkey, from left, prepare thank you cards for Champions for Change’s sponsors and supporters Tuesday. It was a final activity of the summer program.

Champions for Change, which ended its summer sessions Tuesday, was supported by a $5,000 grant from National Arts Strategies and sponsorships from local businesses and organizations. Participating teens said they took an interest in the program for a variety of reasons.

“It was to have people stand beside me and not sit back when I wanted to drive a change,” Bakk said. The change she advocates is to have teen voices heard, along with the voices of others who often go unheard, including people with disabilities.

“I just like the idea of change and new things in Minot,” Watterud said. She also likes the concept of young people coming together for change, bringing their similar generational perspective.

Program participants met regularly over the summer, on average every two weeks.

“We really wanted to invite other changemakers from around the state to talk to them and give them that inspiration and talk about their struggles to drive change in whatever they were passionate about, to really just kind of get the girls to increase their own capacity to drive change in the community – whatever change was important to them,” said Lyndsay Ulrickson, SBPC executive director. “We really didn’t want to pick any particular change and say, ‘This is what we’re doing.’ It was really, ‘What are we all passionate about and how do we want to drive that change in the community?'”

Teens watched a documentary on homelessness and heard from the executive director of The Human Family. They learned about sustainability in talking with a representative of Environmentally Minded People of Minot. They also had a conversation on the difficulties discussing race in North Dakota.

They organized and participated with a muralist in creating a painting that includes two teens sitting atop the world. It can be seen on the side of a building at 115 1st Ave. SE.

Although the formal program has ended, Ulrickson will continue to meet individually with participants through the completion of individual projects they will be working on into the coming year.

Whatever the projects are, Ulrickson said, they will be impactful and will engage their peers. The hope is the projects will generate interest among more youth to get involved in the community and possibly participate in future Champions for Change programs, she said.

The girls also received seed money toward their projects through organizing an outdoor dance downtown. Ulrickson said the project was the teens’ idea and took their leadership, with just a little bit of guidance to get them thinking about the different tasks required as preparation.

“They reached out to and met with the Minot Police Department and Minot Public Works and the Downtown Business and Professionals Association,” Ulrickson said “They did all the work. They planned the entire thing. They marketed it themselves.”

There were 106 people who attended. With the help of sponsors, the event more than covered expenses and was able to provide seed money for the individual projects.

Ulrickson said she would like to see program participants engage with community organizations in organizing their projects.

“The whole point of all of this, too, is to kind of allow the youth to be a part of community decision making,” she said. “But then also, really integrating them in with adults in the community to show adults that teens are really, really smart. Kids are very, very smart. They can accomplish a ton, and they have great ideas and they have energy.”

As they contemplate their final projects, the teens look back positively on what they have gained from the program so far.

Observers have said she’s created a bond with the program stronger than anyone’s, Bakk said.

“And I definitely did. This project has really grown to be a part of me. It’s just taught me that, even when I’m down and nobody was helping me, at some point, I still have all this drive to create this change. No matter what, even if I keep getting knocked down by all these adults, I’m still going to get back up and show them even more that I can do it,” she said.

Watterud said participating in the program increased her confidence, enabling her to share her opinions and interact with adults in a professional, businesslike manner. Starkey said the program gave her connections, so if she has ideas, she knows where to turn for support.

Lessons also were learned when things didn’t fall into place and anticipated help didn’t materialize. Bakk said there were challenges in organizing the downtown dance that almost caused her to give up.

Ulrickson said she saw and felt the frustrations, but that was part of the journey.

“There were five very capable girls, and if they couldn’t do it, I wasn’t going to step in and do it for them,” she said.

With her persistence, Bakk said, the situation turned around in a day and everything lined up. Had organizing the dance been easy, she might not have cherished the event as much or felt the same appreciation for the enjoyment people received from it, she said.

Although already involved in school and active in the community, the teens said participation in Champions for Change reinforced that they are capable and have something to contribute. Watterud said she learned that she enjoys community involvement more than she thought. It makes her feel more a part of a larger purpose, she said.

Ulrickson said her goal with the program was to discover how to best engage youth in the community. Her findings will be part of a final report that can serve as a guide for communities, especially in rural areas, that want to engage their youth.

“I just thought it was something we needed, and who better to tell us how to engage youth than young people,” she said.

A future Champions for Change program is possible if grant funds or sponsorships become available. Ulrickson said she also is willing to serve as a resource for community leaders in area towns who want to attempt a similar program.

Eloise Ogden/MDN Don Larson, right, president of the Dakota Territory Air Museum board of directors in Minot, presents a check for $2,130 to Daniel Haff, Minot, associate for North Dakota for The Foundation of Exceptional Warriors (F.E.W.) on Thursday at the air museum. The air museum and F.E.W. divided the net profits of Ale from Above, an event held during the 75th anniversary of D-Day at the air museum on June 6. F.E.W.’s money will be used “for veterans to enjoy North Dakota,” Haff said. F.E.W. is a national organization based in Bixby, Okla., that launched in 2012. Its mission is to provide cost-free adventures (i.e. fishing, hunting, sky diving, family outings, etc.) for warriors who were wounded in combat, decorated for valor, special operations forces and prisoners of war – any era, any conflict, according to its website. Last week, Haff said in the local area four veterans were taken on a canoe trip on the Missouri River.

Jill Schramm/MDN Chloe Watterud, Adriana Bakk and Izzabella Starkey, from left, prepare thank you cards for Champions for Change’s sponsors and supporters Tuesday. It was a final activity of the summer program.

Indigenous Equality Walk to be held at Belcourt Thursday

BELCOURT – Members of the local LGBTQ2+ community and its allies will hold an Indigenous Equality Walk on ...

The North Dakota Shakespeare Festival will present the Hamlet Drive-In Trunk Tour from 7 to 8:30 p.m. Friday in the ...