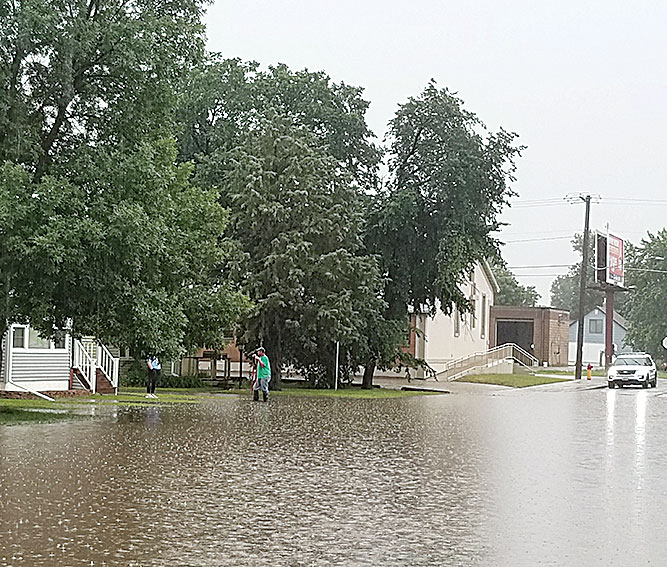 Kim Fundingsland/MDN Heavy rainfall caused water to back up due a clogged street drain in the 500 block of 18th Street NW Tuesday. The clog was quickly cleared by Minot Public Works personnel. Temporary flooding was confined primarily to the street and boulevards. This photograph was taken shortly before 6 p.m. Tuesday.

At times it came down in buckets. Lots of buckets. Tuesday’s torrential rainfall set a few records and was a cause for concern in the state. The National Weather Service issued multiple Flood Warnings and Flood Advisories.

Although rainfall in and around the City of Minot was substantial, the city’s sewer system proved more than adequate in to handle the runoff.

“We really didn’t have a lot of problems,” said Jason Sorenson, Minot Public Works Department. “We had a couple of calls.”

Those calls, said Sorenson, were citizen concerns about street flooding where catch basins had become plugged with debris. Public Works responded to those areas and were able to remove the clogs and allow the drains to do their work. Water that pooled in those areas crept over the curb in places but did not get high enough to effect homes.

There were the usual scattered reports of problems with residential window wells filling with water or basement windows leaking, but nothing out of the ordinary for what was a very wet Tuesday.

The rainfall total at the Minot International Airport was 1.71 inches for the 24-hour period ending at 7 a.m. Wednesday. The North Central Research and Extension Center south of the city recorded 1.13 inches of rain over 24 hours ending at 8 a.m. Wednesday.

Other area totals included 2.43 inches at Minot Air Force Base, 1.82 inches at Lansford, 1.35 at Velva, 1.70 at Watford City and 1.36 at Willow City. According to the NWS a whopping 3.12 inches recorded at Williston was the fourth highest rainfall measured in a 24-hour period in that city since 1894.

River and stream levels in the Minot region were very low prior to Tuesday’s rain. Some rises in water levels had occurred at a few reporting points as of late morning Wednesday but nothing out of the ordinary. Levels of the Souris and Des Lacs Rivers had changed very little as of Wednesday morning.

There was concern about the rising White Earth River at White Earth. It rose about 3 feet overnight Tuesday but was on the decline late Wednesday morning. Even with the increase the river was well within its banks.

The NWS cautioned Wednesday that it was still possible that strong runoff could effect small streams and unexpectedly flood roadways. The NWS said they had received reports of 3-5 inch rainfall in some areas of northwest and north-central North Dakota.