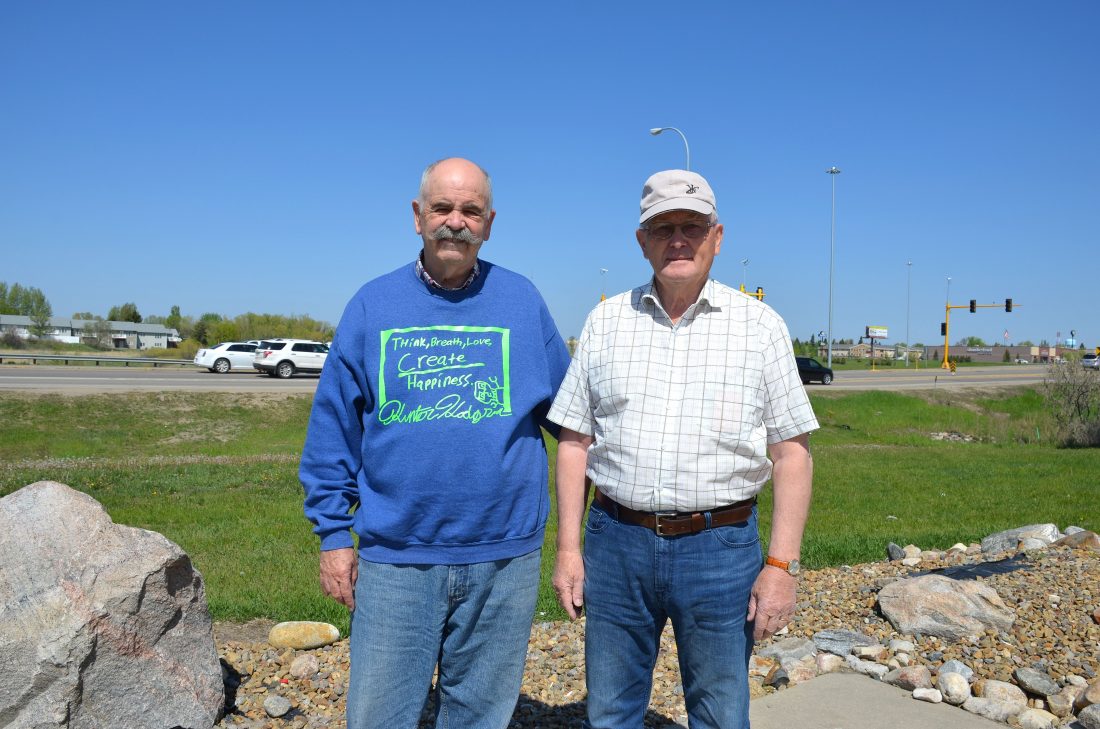 Eloise Ogden/MDN Don Baliszewski, left, of Skiptvet, Norway, was stationed at Minot Air Force Base in the early 1970s. This was his first trip back to Minot and Minot AFB. At right is Odd Buraas, also of Skiptvet. They were on a U.S. trip to research second- and third-generation Norwegian family farms when they stopped in Minot and also visited Minot AFB.

Don Baliszewski hasn’t been back to Minot and Minot Air Force Base for more than 40 years.

This past month Baliszewski and Odd Buraas, both of Skiptvet, Norway, paid a visit to the local area while on a trip through the Midwest researching second- and third-generation Norwegian family farms.

The two visited friends in Minot and also stopped at Minot AFB.

“Having visited the base, it sure has grown after 46 years,” Baliszewski observed. He said he noticed a lot of new housing and many other new buildings on the base, including new Base Exchange and Commissary buildings. When he was assigned to Minot AFB he lived in base housing.

He also made a reminiscent trip past where he had lived just to the right of the main gate entry and past the base theater, where he used to work part time as manager.

Buraas, who accompanied him, had never visited a U.S. Air Force base before. “He was impressed,” Baliszewski said.

Baliszewski served in the U.S. Air Force for 27 years and retired in 1997. He went to work as a NATO civilian at NATO Headquarters in Norway and then was transferred to NATO Headquarters in Belgium, where he worked for 10 years, retired and moved back to Norway. Overall, he has lived in Norway from 1973-76, 1980-88 and 1999-present.

Baliszewski was first stationed in North Dakota for an 18-month unaccompanied (without family) tour of duty at the Fortuna Air Force Station from 1965-66, where he was in computer maintenance working on the ANFS-T2B computer system.

He returned to North Dakota, this time to Minot AFB, in January 1971 after 11 months at Udorn Royal Thai Air Base, Thailand.

At Minot AFB he was assigned to the 91st Strategic Missile Wing (now 91st Missile Wing), supporting the Command Post on base and the launch control facilities doing maintenance on computer equipment in the Minot missile field.

“(I) traveled to most all of the LCFs at one time or another,” he said.

Now, 40-some years later, Baliszewski, along with Odd Buraas, planned a trip to North Dakota and other stops.

“My friend Odd Buraas and I decided to take a 14-day trip in the USA starting in the Midwest and Omaha, Nebraska. Daughter Malia lives there,” said Baliszewski. Other daughters are Tammi Baliszewski of Boise, Idaho; Tonda Mason of Las Vegas, Nev.; and Mindy Baliszewski of Oklahoma.

“Purpose of the trip was to drive the back roads in the Midwest in search of second-and third-generation Norsk family farms, which we found, and visited one in Fergus Falls, Minnesota, before coming to Minot,” Baliszewski said. They toured the Fergus Falls farm, visited an old cemetery near Fergus Falls, where several people originally from Skiptvet are buried, and made a stop at Flom, Minnesota, to visit friends.

“Another prime purpose was to search for a classic car or two to send back to Norway to do a shine up job during the winter,” Baliszewski said. “We drove 5,400 miles in 14 days and were in luck – purchased a 1957 Ford Thunderbird near Wichita Falls, Texas, and a 1956 Chevy Bel Air in Fort Supply, Oklahoma.” The cars were shipped to Norway.

Now both men are back in Skiptvet.

Don Baliszewski of Skiptvet, Norway, formerly of Minot AFB, has an offer for North Dakotans.

He is willing to help North Dakotans who would like to find their Nowegian ancestors. “(I) have helped several here in Norway find family in the USA,” he said. Anyone interested in reaching him can email him at don_bski@yahoo.com.