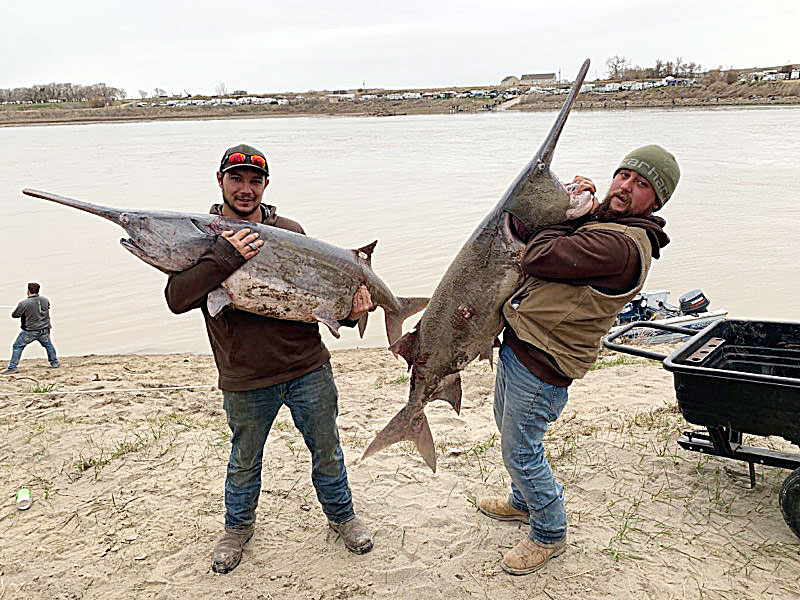 Submitted Photo The paddlefish snagging harvest season will close this Saturday due to the expected reach of the 1,000 fish harvest limit. The full season was scheduled through May 21. Shown with their recent catch are Frankie Burgard, left, with an 88-pound paddlefish and Blake Meyer with a paddlefish weighing 80 pounds. Both men are from Minot.

The North Dakota Game and Fish Department is closing the state’s 2019 regular paddlefish snagging season, effective at 7 p.m. Central Time, on Saturday, May 11.

The 2018-20 fishing proclamation allows for the Game and Fish director to close the snagging season early if it appears the harvest will exceed 1,000 paddlefish.

“All things considered, the 2019 snagging season has gone well with good numbers of both females and males taken,” said Greg Power, fisheries chief. “Perhaps most importantly, a number of small paddlefish have been harvested which may bode well for the future.”

Paddlefish snagging is allowed only from 7 a.m. to 7 p.m. Central Time during each day of the additional four-day season. The use or possession of a gaff on snag-and-release days is illegal.